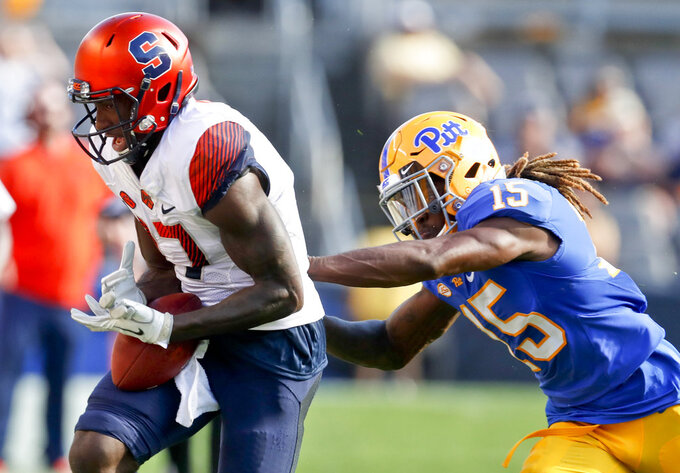 Syracuse wide receiver Jamal Custis (17) tries to control a pass in front of Pittsburgh defensive back Jason Pinnock (15) during the second half of an NCAA football game, Saturday, Oct. 6, 2018, in Pittsburgh. The pass was ruled complete. Pittsburgh won 44-37 in overtime. (AP Photo/Keith Srakocic)

Syracuse quarterback Eric Dungey has forgotten his last pass. It wasn't so easy to do.

Two weeks ago on the Orange's first offensive play in overtime at Pittsburgh after the Panthers had opened extra time with a touchdown, the senior threw an interception in the end zone and trudged off the field a loser again.

Not the sort of way you want to enter a bye week — with two straight losses in Atlantic Coast Conference games the Orange (4-2, 1-2 ACC) led late and knew they could have won. A penalty that nullified a fourth-down conversion late in the fourth quarter at Clemson the previous week gave the unbeaten Tigers a last chance to rally and they did, winning 27-23 to keep their national title hopes alive.

"You've got to move on, have a short memory," Dungey said. "You do think that (we could be undefeated), but at the end of the day we've got six more games. If you dwell on that, then it's not going to be good for the rest of the season."

The second half of the season starts Saturday in the Carrier Dome against North Carolina (1-4, 1-2 ACC), and Tar Heels coach Larry Fedora has his own issues to deal with.

Against Virginia Tech last week in a 22-19 loss at home , the Tar Heels were poised to put the Hokies down two scores with about 6 minutes remaining when tailback Michael Carter lost a fumble as he neared the goal line.

Virginia Tech recovered and drove 98 yards for the win, relegating Carter's big day — a career-high 165 yards rushing on 18 carries — to an afterthought on a night when UNC outgained Tech 522-375.

"We can point out all the missed opportunities in the game. It was very obvious," Fedora said. "We had many opportunities where that thing shouldn't have been a close game, to be honest. It shouldn't have even been a game in the fourth quarter. We've just got to make a play when it presents itself.

"I think we're progressing. We're getting a little better each week in the run game. I think our offensive line is starting to come together. Each week those guys have improved."

The time off for the Orange was beneficial. Tight end Ravian Pierce and safety Antwan Cordy have recovered from injuries and are listed to start on the depth chart for Syracuse, which is 4-0 at home.

Other things to know when North Carolina visits Syracuse on Saturday:

North Carolina rushed for a season-high 235 yards against Virginia Tech, its second straight game going over 200 yards on the ground. UNC also rushed for 215 yards at Miami. Despite a stout front four, in its two losses Syracuse allowed 568 yards rushing with some bad tackling all around.

"We've got to come back and focus on the basics of what we do and get back to the fundamentals," Orange defensive end Kendall Coleman said. "That's where our focus is so that we can do the simple stuff. This will be a test, without a doubt."

SOMETHING HAS TO GIVE

Nathan Elliott is the likely starter again at quarterback for North Carolina. He had started the first four games before the Tar Heels opted for freshman Cade Fortin coming out of the open weekend to face Virginia Tech. But Fortin went down with a right leg injury late in the first half and Fedora has offered no updates on his status. With No. 2 QB Chazz Surratt set to undergo season-ending wrist surgery, that leaves Elliott and another freshman — Jace Ruder — as UNC's quarterbacks this week.

Against Virginia Tech, the Tar Heels had their best defensive outing since the opener. They finished with four sacks, (two each by Jason Strowbridge and Malik Carney), their high in an ACC game this year and second only to the five they had at California to open the season. Overall, UNC made nine tackles for losses against the Hokies.

The Tar Heels are tied for 102nd nationally in red zone offense, scoring on just 78.9 percent of their trips inside their opponents' 20-yard line. In the loss last week to Virginia Tech, UNC drove inside the 20 seven times and scored just 19 points — one touchdown and four field goals.