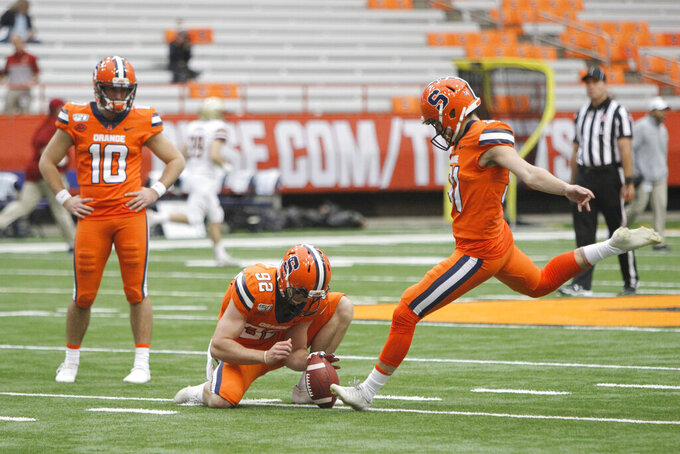 File- This Nov. 2, 2019, file photo shows Syracuse's Andre Szmyt kicking before an NCAA college football game against Boston College in Syracuse, N.Y. Syracuse has a terrific 1-2 punch in punter Sterling Hofrichter and Szmyt. Together they’ve helped the Orange excel on special teams for a second straight season. Hofrichter has landed 93 of his 255 career punts inside the 20-yard line with only 13 touchbacks. (AP Photo/Nick Lisi, File)

SYRACUSE, N.Y. (AP) — Syracuse has had one constant source of excellence in what has been a down year — the right legs of punter Sterling Hofrichter and kicker Andre Szmyt.

Szmyt, a 6-foot-1, 195-pound redshirt sophomore from the Chicago suburbs, won the Lou Groza Award last season, given annually to the nation's top kicker, and earned unanimous All-America honors. He finished his breakout first year as just the second Bowl Subdivision kicker to lead the nation in scoring average (12.3 points), converting 30 field goals (one off the national record) in 34 tries and all 61 extra points he attempted on a team that averaged 40 points.

Impressive for a walk-on who five years ago was playing high school soccer, not even on the radar of his school's football coach. The soft-spoken Szmyt won the Orange job in preseason camp last year.

“I knew once I was listed as the No. 1 on the depth chart that I could continue,” Szmyt said. “Gaining confidence was a big part.”

The heady days of 2018 for Szmyt, who was awarded a scholarship at midseason after kicking three field goals in the rain in an overtime loss at Pitt, have dimmed somewhat this year as the Orange (4-6) have struggled on offense. Scoring is down to 26.6 points per game.

Szmyt is 11 of 14 on field goals, with two of his misses hitting uprights, and he’s also missed one point-after attempt. But in two seasons he remains a perfect 14 of 14 from inside the 40-yard line, and he has converted four attempts from 50 yards and beyond without a miss.

“Last year was ... a real whirlwind,” said Szmyt’s father, Eric. “A lot of it was like validation of our thinking about how talented he was because he had just played the one year in high school. He didn’t have a whole lot of exposure. We knew what his potential was, but it was hard to know whether or not that would translate. To go from not just winning the position but to winning the Lou Groza was incredible.”

Hofrichter, a 5-9, 199-pound redshirt senior, is a semifinalist for the Ray Guy Award and has consistently given the Orange a boost with his booming kicks. Hofrichter also handles kickoffs, but when he trots onto the field to punt his teammates tend to stop and watch, awaiting the loud thud when foot meets ball.

“My goal is to try to get the ball to hang up there as long as possible and get it as far down the field as possible so that our team’s got a chance to flip the field and give their returner less chance to return the ball,” said Hofrichter, a Florida native whose first sport also was soccer. “Really, when I punt, I don’t look to try to kill the ball. I just kind of put down a nice, easy swing and make some good contact because the best ball you hit is the one that’s going to have a tight spiral.”

Syracuse ranks third nationally in net punting (43.2 yards), and the longest opponent punt return so far this season was 5 yards by Holy Cross's Jon Jon Roberts. He lost a fumble on the play. Punts against Pittsburgh this season and at Clemson last fall also resulted in lost fumbles and the Orange capitalized on both.

“The hang time that Sterling puts on a punt — they’re hard to return,” Syracuse safety Andre Cisco said. “It adds up in a lot of aspects of the game that you can’t always see. It’s a huge part.”

Hofrichter’s accuracy is spot-on, too. More than a third of his 262 career punts have been downed inside the 20-yard line.

“He’s outstanding. He’s got a freaking cannon leg. The guy’s a weapon,” Pittsburgh coach Pat Narduzzi said. “He’s an NFL punter. There’s nobody that punts it higher than he does. Forget the distance. That thing is up there.”

Now imagine this. You have the reigning Lou Groza Award winner and he’s never missed a field goal from 50 yards or beyond and you send your punter in to try a 52-yarder. That’s what happened in the first quarter in late September against Holy Cross, and Hofrichter delivered his third field goal in four career attempts.

“We trust them both,” Syracuse quarterback Tommy DeVito said. “The way they push each other is something that we have an edge on over any other team.”