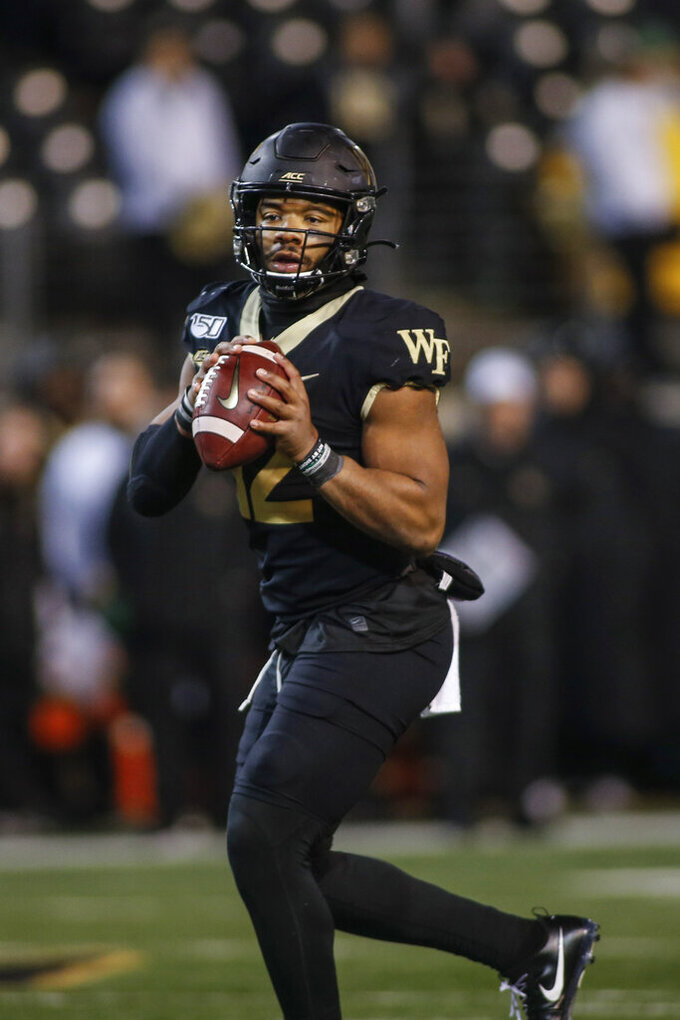 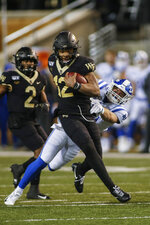 SYRACUSE, N.Y. (AP) — Syracuse has one thing left to play for — pride.

That will have to suffice for 23 seniors when Wake Forest visits the Carrier Dome on Saturday because it’s their final game for the Orange. Syracuse has been eliminated from playing in the postseason.

“This game is definitely important for me and the team, just off the simple fact that everybody wants to end the season on a high note,” senior defensive back Evan Foster said. “Unfortunately, we are unable to go to a bowl game, but we can definitely still make improvements and just play hard ... go out as a winner. That’s very important.”

What began as a season of great promise — the Orange finished 2018 ranked No. 15 after a 10-win season that included a bowl victory and were ranked No. 22 in the preseason this year — imploded quickly. A shocking 43-point loss at Maryland in the second game on the schedule was an ominous sign, and it snowballed later into a four-game skid that kept the Orange (4-7, 1-6 Atlantic Coast Conference) winless in the conference until a victory two weeks ago at Duke.

“You have to turn a negative into a positive,” Syracuse coach Dino Babers said. “There were expectations from a lot of people, including a lot of people who were in this room (last) Sunday for the team meeting. Things didn’t go our way.”

Syracuse is coming off a 56-34 loss at Louisville, which sealed the Orange’s fate. The Demon Deacons (8-3, 4-3) held on to defeat Duke 39-27 last week and are headed to the postseason for the fourth straight time.

“They are a very veteran and very talented team,” Wake Forest coach Dave Clawson said of the Orange. “When the year started, pretty much everybody in the country had them pegged as the second-best team in the ACC. They had really high expectations. For injury reasons or other reasons, maybe things haven't panned out the way they hoped for.”

They have for the Demon Deacons, who went 6-1 at home and have reached eight wins for the first time since 2007. The victory over the Blue Devils was a crowning achievement because it completed a sweep of their in-state rivals — North Carolina, North Carolina State, and Duke.

“I am really proud of our team for accomplishing that. We accomplished a lot of goals,” Clawson said. “We want to accomplish some (more) goals, so our work is not done.”

Wake Forest gave up kickoff returns for touchdowns of 97 and 98 yards to Duke’s Damond Philyaw-Johnson, who was untouched on both. That allowed the Blue Devils to stay close in a game Wake Forest dominated statistically with over 600 yards of offense.

“It was embarrassing,” Clawson said. “That could have very easily cost us the football game. I’m sure they're (Syracuse) salivating. In their special teams meetings they're licking their chops.”

Orange freshman Jawhar Jordan returned three kicks for 101 yards against Louisville with a long of 48.

Babers fired defensive coordinator Brian Ward after the Orange defense allowed a school-record 496 yards rushing in a humbling 58-27 home loss to Boston College in early November. Steve Stanard was named the interim, but the defense was torched for 608 yards in last week’s loss to the Cardinals.

“It’s definitely something that we need to look into ... because it needs to be addressed, whether we do or don’t make a change (again),” Babers said.

Syracuse has the reigning Lou Groza Award winner in place-kicker Andre Szmyt and the Demon Deacons have Nick Sciba. Szmyt hit 30 of 34 field goals last season, one off the national record, and is 13 of 16 this year. Sciba, a sophomore, kicked four last week to boost his personal streak to 32 straight makes, an NCAA record. Chuck Nelson of Washington hit 30 in a row in 1981-82.

Orange punter Sterling Hofrichter was knocked out of last week’s loss when a teammate accidentally hit him. Babers says he expects his senior star, named this week as one of three finalists for the Ray Guy Award, to be ready for the Demon Deacons.

“I’m expecting him to be fine ... unless something pops up that I don’t know about,” Babers said. “It was a little scary ... but he’s a warrior in every sense of the word.”