Syracuse teetering on the brink as BC comes to town 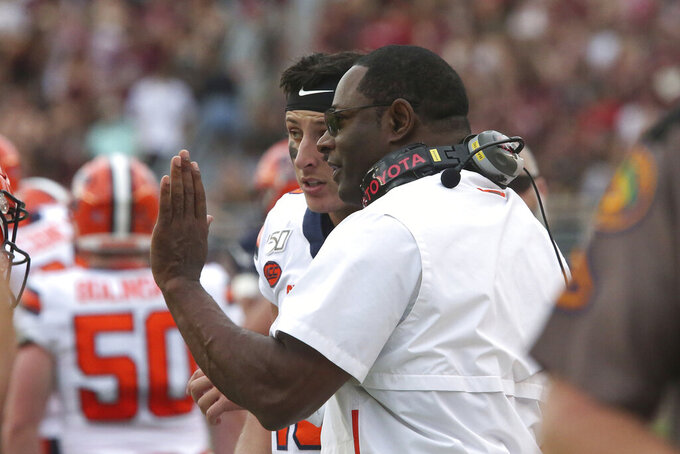 SYRACUSE, N.Y. (AP) — Dino Babers figures he knows what's wrong in what has become a tough season for Syracuse, and he needs a quick fix.

"We need to reel it back in," Babers said. "We talked about eliminating mental mistakes, playing physical. I think that this adversity that we're going through is going to make them better. We need to work our way through it and persevere, and I believe we will.

Syracuse (3-5, 0-4 Atlantic Coast Conference) is the only team in the ACC without a league win, and there are just four games left in the regular season to reach the six-win total needed to qualify for the postseason.

The Orange have lost three straight as they prepare to host Boston College (4-4, 2-3) in an Atlantic Division matchup on Saturday. The Eagles have dropped three of four, including 59-7 at No. 2 Clemson last week.

"We played the national champion. I'd say it was the best game they played all year," said BC coach Steve Addazio, a former Orange assistant. "It was a homecoming game at night, Saturday night, Death Valley. I mean, they were humming."

This game between the longtime Northeast rivals is usually very physical. Last year, Syracuse quarterback Eric Dungey made the last regular-season game of his college career memorable, accounting for all six Orange touchdowns against BC —three on the ground and three through the air — in a 42-21 victory, running over a defender or two along the way. The previous year AJ Dillon rushed for 193 yards and three TDs in a 42-14 BC triumph in the Carrier Dome.

"They're known for being bruisers," Syracuse nose tackle Josh Black, who has 29 tackles, 5.5 for losses, said of the Eagles. "We've just got to shut that down."

Dillon has rushed for 1,044 yards and 10 touchdowns and ranks fourth nationally in rushing yards and rushing yards per game (130.5) for a unit that's averaging 255.6 yards on the ground. He also has a school-record 3,741 rushing yards. In last week's loss to Florida State, the Syracuse defense allowed 487 yards of total offense, nearly half on the ground (241 and five TDs).

"That's what they want to do. They want to run the football. That's how they decided they want to win football games," Babers said. "We've got to line up, match their physicality and stop the run. If we don't do that, it will not be good."

Babers just shakes his head at all the miscues. Last week at Florida State, the Orange trailed 35-3 in the third quarter before rallying for two touchdowns in the fourth. Syracuse was called for 14 penalties for 107 yards, bringing the season total to 78 for 629 yards. Only Central Michigan and Tulsa have more infractions.

"They want to win so bad, and they want to do well so bad, that they jump, they move, they make a mental mistake," Babers said. "They've done it right a thousand times, and we have a lot of confidence that they're going to do it right in a game and then they blank, for a second.

"We've got too many older guys having penalties and we can't have that with as many young guys as we have playing."

Added quarterback Tommy DeVito: "As an offense, we need to get started earlier. We can't just keep waiting until the third or fourth quarter. We need to do that the first drive of the game."

Syracuse has 11 turnovers on the season and has not committed one in 242 offensive plays, including 172 pass attempts. The spotless span includes all of the last three games, the best streak since Babers took over four years ago. BC is even better, tied for seventh nationally and atop the ACC with North Carolina State with just six turnovers.

Syracuse ranks last in the nation with 42 sacks allowed for 248 yards. That's 5.25 a game if you're counting. Among the totals, eight allowed against both Clemson and North Carolina State , and nine against Pitt . BC leads the ACC with just five sacks allowed.

Veteran offensive right tackle Ryan Alexander, a transfer from South Alabama, abruptly left the Syracuse program prior to last week's game and freshman Matthew Bergeron started in his place last week against Florida State. The unit allowed seven sacks among 12 tackles for a loss as the Orange failed to score a touchdown in the first half for the third straight game.