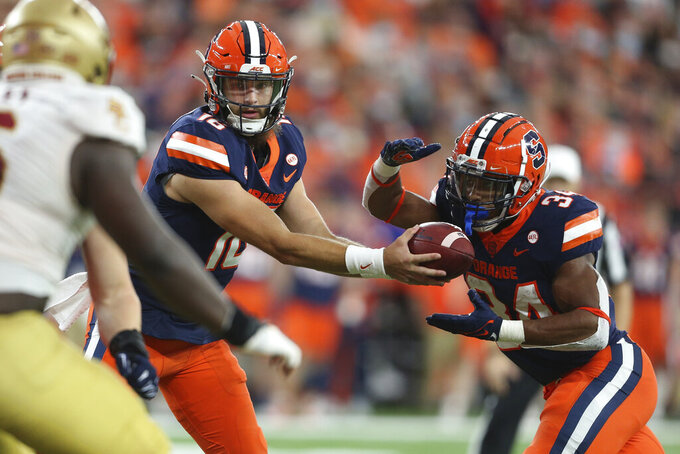 Syracuse quarterback Garrett Shrader (16) hands the ball off to running back Sean Tucker (34) during the first half of the team's NCAA college football game against Boston College in Syracuse, N.Y., Saturday, Oct. 30, 2021. (AP Photo/Joshua Bessex)

SYRACUSE, N.Y. (AP) — It was a slog for the Syracuse offense in the first half. Four false starts. Zero points. Just six first downs and 118 yards.

Then Sean Tucker, the nation's leading rusher, broke one up the middle for a 51-yard score midway through the third quarter Saturday and Syracuse (5-4, 2-3 Atlantic Coast Conference) was on the way to a 21-6 win over longtime rival Boston College (4-4, 0-4 ACC).

The Orange's second straight victory left them on the cusp of bowl eligibility.

“There’s no doubt that ignited us,” Syracuse coach Dino Babers said. “But I also I think back to the defense being able to keep touchdowns off the board and keeping them to field goals, keeping us within reach and within hope of one quick strike, whether it goes through the air or on the ground.”

Quarterback Garrett Shrader scored on a long run shortly after Tucker’s burst — a 48-yarder down the left sideline — and Courtney Jackson ran back a line drive punt 66 yards for another touchdown, part of a three-touchdown blitz in a five-minute span to overcome a 6-0 BC lead.

“We didn’t come out ready to play. The defense did a great job getting stops, not giving up a touchdown,” Shrader said. “They had our number early on and maybe we weren’t ready for it, but we figured it out in the second half."

The loss was the fourth straight for the Eagles.

“We missed their two runs, missed two tackles,” BC coach Jeff Hafley said. “Didn’t do what we were doing in the first half.”

The Orange head into a long-awaited bye week just one win from qualifying for the postseason.

“The bye week comes at the right time,” said Shrade, who had 78 yards rushing and was 5-of-14 passing for 65 yards. “Everything we want to accomplish is right in front of us.”

Both teams struggled on offense in the first half. Connor Lytton’s 31-yard field goal at the start of the second quarter was all both teams could manage in the first 30 minutes.

Grosel and Morehead, a true freshman seeing the first action of his career, combined to go 15-of-32 passing for 180 yards.

“Their defense got after us,” Grosel said. “We were prepared. We had it going. We just didn’t execute.”

Tucker, who rushed for a career-high 207 yards and a school-record seventh straight 100-yard game, is 105 yards away from tying Joe Morris for Syracuse's single-season rushing record. His 51-yard run gave the Orange a 7-6 lead.

“Getting that record definitely means a lot to me and makes all the hard work worth it,” Tucker said.

“They were determined,” Babers said of his defense, which was coming off a poor effort against Virginia Tech a week ago. “They had a chip on their shoulder.”

Boston College: The Eagles continue to struggle on offense and neither Grosel nor Morehead provided the answer against a tough Syracuse defense. The Eagles have have scored just 40 points in the four losses.

Syracuse: The Orange's best offense is to keep handing the ball off to Tucker. Defenses know it's coming but can't stop him. Shrader was held in check much of the game but is able to break long runs when Syracuse needs them.

Syracuse has a bye week before traveling to Louisville on Nov. 13.