Syracuse's Chris Elmore is one of a kind 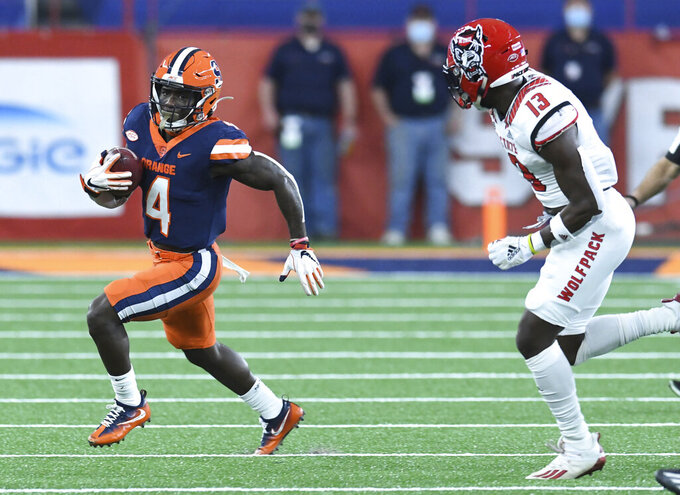 Syracuse wide receiver Nykeim Johnson (4) runs past a defender during the first half of an NCAA college football game against North Carolina State on Saturday, Nov. 28, 2020, at the in Syracuse, N.Y. (Scott Schild /The Post-Standard via AP)

Syracuse coach Dino Babers won't ever forget this most unusual season, even though he'd certainly like to with only one win and one game to play. And he most assuredly won't forget the contributions of senior Chris Elmore, who has taken the meaning of the word selflessness to a rare level.

“ Chris Elmore is so unselfish,” Babers said. “We would not have been able to finish the season without him. It would have been 11 no-contests without Chris. I can't thank him enough for the unselfish act he did in keeping us afloat and keeping us running through these games."

Syracuse has played every game on its schedule without a disruption. It’s a testament to the athletic department’s aggressive approach in combating the novel coronavirus, but keeping the season intact hasn’t translated to success on the field. Syracuse (1-9, 1-8 Atlantic Coast Conference) has lost seven straight and is last in the conference with a date at No. 2 Notre Dame looming in Saturday’s season finale.

“From a team standpoint, we needed to play these games. We needed to grow,” Babers said. “We needed the knowledge that these games are going to bring to us in the future, and he’s one of the main reasons ... why we were able to pull this off.”

Unselfishness in Elmore’s world means giving up his fullback slot and playing offensive guard for the first nine games, a position he hadn’t played since junior high, because the team was hit with a slew of injuries and needed him there.

“I’m a 6-foot-nothing guy who hasn’t played o-line in a million (years),” said Elmore, whose low center of gravity and 288-pound frame have served him well. “It was just like, ‘I don’t know, but I’ll do it for the team and I’ll give it my best.’ ”

It's been difficult to persevere because losing tends to take a toll, but Elmore realizes that for him playing football is by far the best place he could be. Before the season he was hopeful of remaining on campus no matter what. Going back home to the mean streets of Chicago was not what he wanted.

“Coming from where I come from, there’s a lot going on right now, especially with gun violence and things like that," said Elmore, whose younger brother Craig, a running back at Kent State, played sparingly in 10 games as a redshirt freshman last season and then left the program. "Just me being able to stay out of the way and be up here and do something productive and work toward my goals, there’s nothing more I can ask for. When I’m up here at school I feel safe. When I’m back at home, there’s no telling what would go on.”

Elmore's versatility and size gives him a shot at playing at the next level, something he covets. He was a fullback and defensive tackle in high school at Phillips Academy on Chicago's South Side and at Syracuse has played defensive tackle, offensive tackle, fullback, tight end, and kick returner. In last week’s loss to North Carolina State, his block helped spring Trebor Pena f or a 98-yard touchdown return — the first for the team in nearly a decade — that tied the score in the first quarter.

His teammates marvel at what “Rhino” brings to the huddle.

“Chris Elmore is an amazing football player,” junior wide receiver Taj Harris said. “Since I got here, I watched him step into roles that not a lot of guys could step into. The guy can do anything. If every quarterback goes down, guess who’s going to be playing quarterback — Rhino. He’s a heckuva player. Him moving to o-line just shows you how adaptive he is. He can play any position on the field, and I mean it.”

“The character that that guy has to be able to switch positions and everything, you have to tip your hat off to a guy like that,” added senior wide receiver Nykeim Johnson. “He put team first. He didn’t worry about himself.”

The losing hasn't erased the seemingly perpetual smile from Elmore's face. He's remained a positive presence through all the losses and has achieved one of the main goals set before the season — to remain healthy.

“Trying to bring that energy is definitely hard," Elmore said. "Just to see that we’re not having the season that we wanted, a lot of guys are like, ‘Man, I’m ready to go home.’