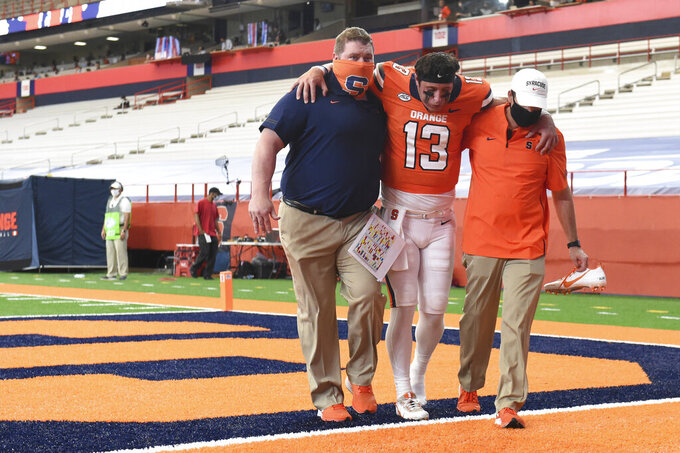 Syracuse= quarterback Tommy DeVito (13) is carried off the field in the second half against Duke during an NCAA college football game, Saturday, Oct 10, 2020, at the Carrier Dome in Syracuse, N.Y. (Dennis Nett/The Post-Standard via AP)

SYRACUSE, N.Y. (AP) — Syracuse redshirt junior quarterback Tommy DeVito suffered an injury to his left leg in a home loss to Duke on Saturday, and coach Dino Babers said afterward the injury was “not good.”

“Based off some of the stuff I’ve heard, it’s not good," Babers said. "We’re all pulling for him and we wish him the best. But right now, it’s not good.”

DeVito was sacked early in the fourth quarter and left the field with help from two staff members. He finished watching from the sideline with a boot on and resting on crutches.

The redshirt junior has been pounded this season and last. The Orange have allowed 20 sacks in four games this year and last season gave up 50.

Babers also said preseason AP All-America safety Andre Cisco will be out “for a long period of time.”

Cisco, who entered the season with 12 interceptions, tops in the Bowl Subdivision among returning players, suffered a lower body injury in a collision with a teammate during pregame warmups two weeks ago prior to the Georgia Tech game. He did not play against the Yellow Jackets or the Blue Devils.