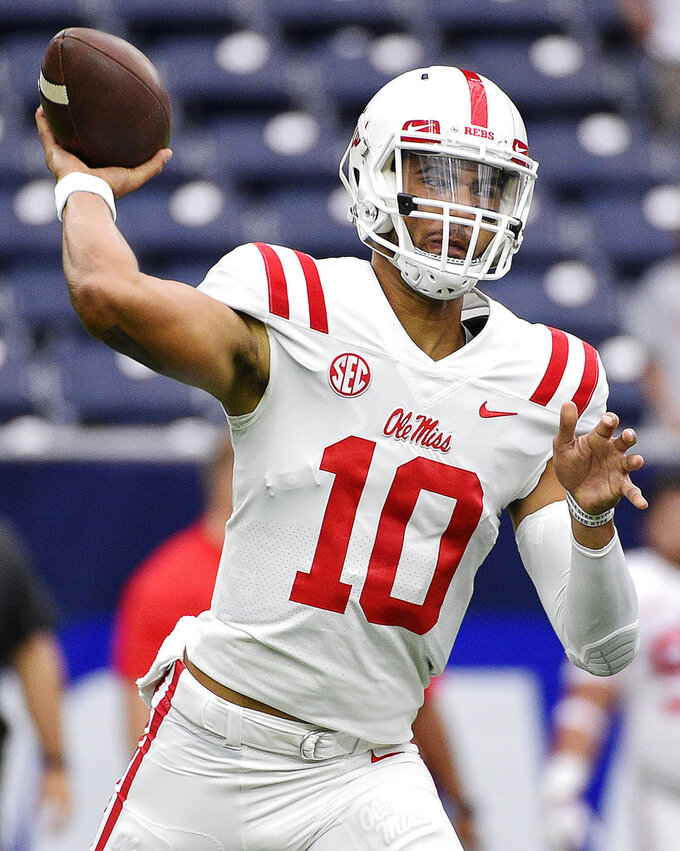 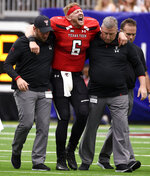 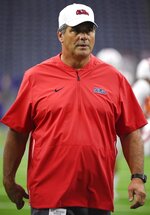 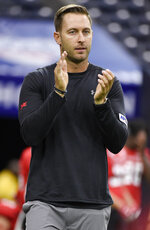 HOUSTON (AP) — Jordan Ta'amu threw for 336 yards and two touchdowns and Scottie Phillips ran for a career-high 204 yards and two more scores to give Mississippi a 47-27 win over Texas Tech on Saturday.
Phillips extended Mississippi's lead to 37-20 when scampered 65 yards for a touchdown with about seven minutes left in the third quarter.
Da'Leon Ward's second touchdown on a 9-yard run got Texas Tech within 10 later in the third, but Ta'amu found A.J. Brown for a 34-yard touchdown pass on the second play of the fourth quarter to make it 44-27.
Texas Tech freshman Alan Bowman was 29 of 49 for 273 yards and a touchdown after taking over late in the first quarter when starter McLane Carter was injured.
Ta'amu got things going early when he connected with D.K. Metcalf for a 58-yard touchdown pass on the second play of the game.
The Red Raiders evened it up when Ward ran 15 yards for a score on their first possession. That touchdown was set up when T.J. Vasher made an Odell Beckham-esque one-handed catch for a 31-yard gain two plays earlier. Vasher grabbed the ball with his right hand as he leapt above the defender and secured it with both hands before crashing to the turf near the sideline.
Ole Miss regained the lead quickly when Jaylon Jones returned the ensuing kickoff 94 yards for a touchdown.
The Rebels were up 17-7 when Carter appeared to injure his left ankle when he was tackled by a pair of defenders on a run for no gain. He tried to remain in the game but fell to the ground at the line and was helped off the field and then carted to the locker room.
Mississippi's first touchdown from Phillips, a run of 39 yards, came next to make it 24-7 late in the first quarter.
Bowman made a nice throw under heavy pressure for a 14-yard TD pass to Ja'Deion High to cut the lead to 27-17 about two minutes before halftime.
THE TAKEAWAY
Mississippi: Ta'amu looked great from the start of this one, using a variety of receivers and running the offense with ease. He'll have one more week to fine tune things before the Rebels begin Southeastern Conference play.
Texas Tech: Bowman handled things pretty well after being thrown into action following Carter's injury. But if Carter is out for an extended period of time he'll need to keep developing for the Red Raiders to succeed. Texas Tech's defense will also have to figure out how to limit big plays after the Rebels exploited it for several on Saturday.
UP NEXT
Mississippi: The Rebels host Southern Illinois next Saturday before opening conference play on Sept. 15 when they host top-ranked Alabama.
Texas Tech: The Red Raiders host Lamar next Saturday in their home opener before the Houston Cougars visit Lubbock on Sept. 15.
___
More AP college football: https://apnews.com/tag/Collegefootball and http://www.twitter.com/AP_Top25