Tagovailoa, Terrapins had poise tested in win over Illinois 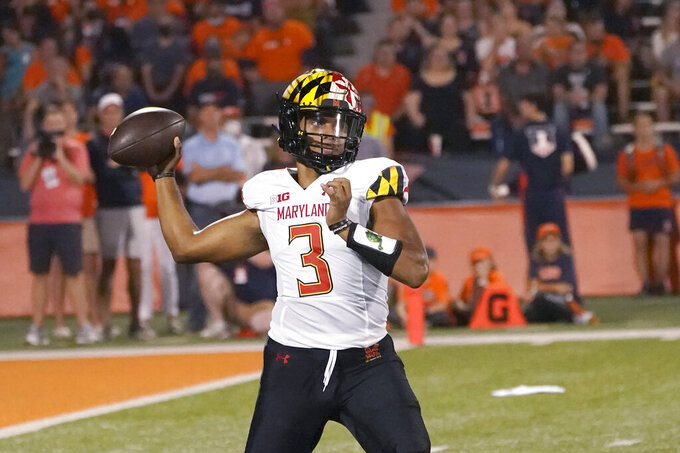 Maryland quarterback Taulia Tagovailoa throws a pass during the first half of the team's NCAA college football game against Illinois on Friday, Sept. 17, 2021, in Champaign, Ill. (AP Photo/Charles Rex Arbogast)

COLLEGE PARK, Md. (AP) — In a second half full of mistakes, Maryland was running out of time. Then everything started to click for quarterback Taulia Tagovailoa and the Terrapins.

“We knew we kind of were stopping ourselves all game," receiver Jeshaun Jones said. "He kind of just told us, this is the time. We need it now, and let's go get it.”

Tagovailoa and the Terps rallied to win their Big Ten opener Friday night at Illinois, and Maryland seems to be making strides in coach Michael Locksley’s third season. Last week’s game showed how vulnerable Maryland is when turnovers and penalties start to mount — but it also showed how smoothly Tagovailoa and his receivers can operate if the Terps avoid those mistakes.

“It was a good game for us from a standpoint of answering some of the questions we had going into the '21 season,” Locksley said Tuesday. “This was one of the first games where I thought we had a chance to possibly fold under adversity, and I was really pleased with the way the team responded.”

Up 10-3 in the third quarter, the Terrapins (3-0) drove deep into Illinois territory before Tayon Fleet-Davis fumbled the ball away. After that, not much went right for a while. Maryland allowed a long touchdown drive that tied the game, then lost another fumble on the first play of its next possession.

The Terps escaped that jam with an immediate interception, but they eventually fell behind 17-10 on a fluky play early in the final quarter. A fumble by Illinois' Reggie Love III went straight to teammate Casey Washington, who had an easy path to the end zone.

Maryland later had a long touchdown called back because of a penalty, and another penalty gave the Illinois offense a key first down. When the Terps got the ball back, there was only 4:50 remaining.

That's when Tagovailoa showed the form that could make Maryland an intriguing team in the Big Ten this year. He directed an 86-yard drive that ended with a 10-yard touchdown pass to Fleet-Davis. After an Illinois punt, Tagovailoa completed two quick passes to set up Joseph Petrino's field goal, which gave Maryland a 20-17 win.

Tagovailoa went 32 for 43 for 350 yards. He's completed 75.5% of his passes this season — without an interception. Four Maryland players have at least 10 catches on the season, and Dontay Demus leads the Big Ten with 113 yards receiving per game.

On Friday, five Maryland players had at least four catches, and four of them had between 66 and 77 yards receiving.

“I actually enjoy having the depth that we have," Jones said. "You can't really stop all of us, in my opinion.”

Maryland hosts Kent State this weekend, then the Big Ten schedule gets serious when the Terps take on Iowa and Ohio State in consecutive weeks. That will be the big test of whether Tagovailoa and his receivers can cause problems for the league's top teams.

For now, though, Maryland has shown some mettle while winning its conference opener on the road — in the type of game that can help a team build confidence.

“I think it can do great things for us," Tagovailoa said. "As an offense, we felt like we didn't play our best game, but I think the one thing that helped us through was our brotherhood and playing for each other. We battled through adversity.”