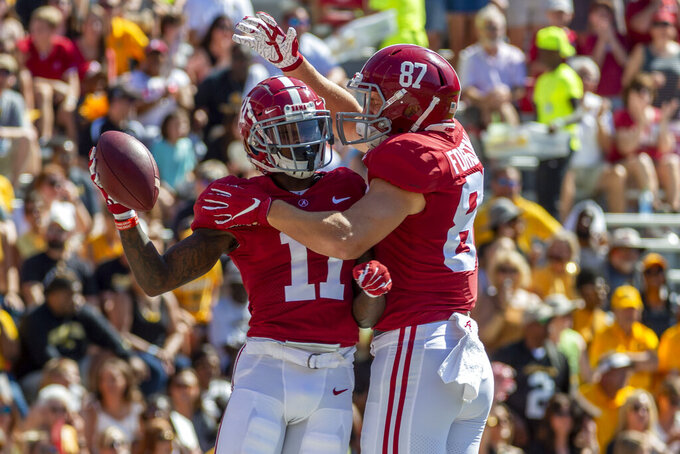 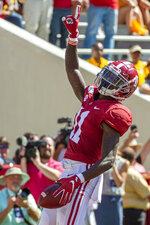 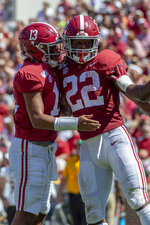 TUSCALOOSA, Ala. (AP) — The glaring sun was the only thing that slowed down Alabama receiver Henry Ruggs III early, and that was only for an instant.

Ruggs held up momentarily before pulling in his second long touchdown catch in the second-ranked Crimson Tide's 49-7 victory over Southern Miss on Saturday. He collected it and was off to the races again for a 74-yard score.

Ruggs said it wasn't an underthrown ball by Tua Tagovailoa, who had another huge game.

"The sun caught in my eye," he said. "The ball was right in the sun, so I actually turned around to make sure I secured the catch instead of catching it over the shoulder."

Tagovailoa passed for 293 yards and five touchdowns in just three quarters, including a 45-yarder and 74-yarder to Ruggs in the first nine minutes.

He had his second straight five-TD game and the Tide (4-0) raced to a 28-0 lead in the first 19 minutes in yet another lopsided victory. Last season's Heisman Trophy runner-up completed 17 of 21 passes.

The Golden Eagles (2-2) couldn't keep up with the speedy Ruggs, despite a little help from the sun. He had a career high in receiving yards even before the first quarter ended.

Ruggs finished with four catches for 148 yards, all in the first half and all on four targets. He sprinted to the end zone untouched on a slant pattern for the 45-yarder.

There were plenty of big plays to go around for an offense that had back-to-back 91-yard scoring drives. Alabama scored on its first four possessions in an early kickoff in hot weather against a sizable underdog.

"There's a lot of reasons that the players could have not played well today," Tide coach Nick Saban said. "And I was really pleased with the fact that they were ready to play and got after it."

"I've been coaching a long time, and this is probably the first time I've ever said this: I don't know if I've ever seen an offense with two Heisman Trophy candidates in it," Southern Miss coach Jay Hopson said. "They're good, they're really good. They're going to be one of the best, if not the best, offenses in college football with that type of exploding. The quarterback, I mean he just doesn't make a bad throw."

For Southern Miss, De'Michael Harris had 34 yards rushing with 50 yards and a touchdown receiving. Jack Abraham completed 17 for 26 passes for 174 yards.

Alabama's injuries continue to pile up. Linebacker Terrell Lewis missed the game with a hyperextended knee, but Saban said he's expected back to practice by Tuesday. Christopher Allen started in his place. Nose guard DJ Dale was helped to the locker room late in the first half with a patella tendon strain.

"Doc thinks he may be OK," Saban said.

Placekicker Will Reichard left the game after a kickoff in the first quarter with a pulled hip flexor and Joseph Bulovas handled the duties after that. Saban labeled him as questionable against Mississippi next weekend.

Southern Miss: Couldn't cash in with points on three early trips into Alabama territory. Was outgained 514-226 in total yards.

Alabama: Just keeps rolling along, but its toughest games await. Tagovailoa now has 17 touchdown passes without throwing an interception this season. The biggest test for the Tide could be overcoming all the injuries.

Tagovailoa's fourth TD pass made him the second Alabama quarterback to reach 70. AJ McCarron has the school career mark with 77. Tagovailoa also passed Jalen Hurts and others to move into the top 5 on Alabama's career passing yards list.