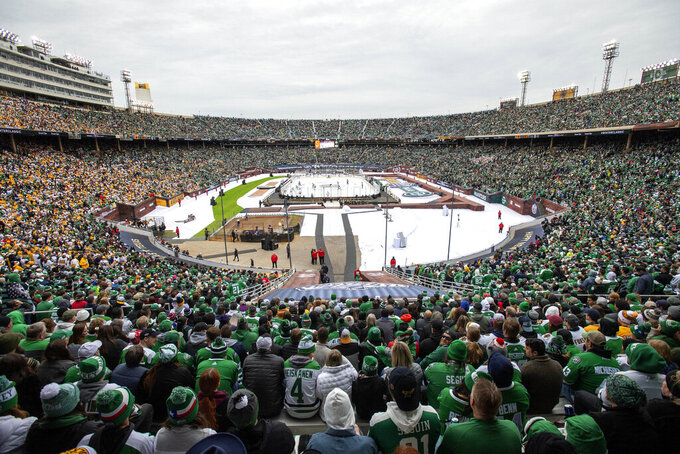 FILE - In this Jan. 1, 2020, file photo, fans watch the NHL Winter Classic hockey game between the Dallas Stars and the Nashville Predators at the Cotton Bowl in Dallas. Outdoor games have become the the marquee event of the NHL season ever since the league staged the first Winter Classic in Buffalo in 2008. None of the 30 previous outdoor games had quite a setup like this season when the league will stage two games this weekend on the 18th fairway of a golf course on the shores of Lake Tahoe, with the Sierra Nevada Mountains towering in the background. (AP Photo/Jeffrey McWhorter, File)

Outdoor games have become the the marquee event of the NHL season ever since the league staged the first Winter Classic in Buffalo back in 2008.

There have been games at iconic baseball stadiums like Wrigley Field and Fenway Park and others at college football cathedrals like Notre Dame Stadium or the Big House at Michigan.

None of the 30 previous outdoor games had quite a setup like this season, when the league will stage two games this weekend on the 18th fairway of a golf course on the shores of Lake Tahoe, with the Sierra Nevada Mountains towering in the background.

With the COVID-19 pandemic preventing the ability of huge crowds gathering at a stadium, the league opted for a pair of true outdoor games in a picturesque setting far from any stadium.

If the feedback to the games Saturday between Colorado and Vegas and Sunday between Boston and Philadelphia is as positive as it was to the first Winter Classic, the NHL could look for other dazzling outdoor venues in the future.

“We feel this is something that will resonate with sports fans,” NHL chief content officer Steve Mayer said. “I really believe this is going to catch their eye whether you’re a hockey fan or basketball fan or football fan, this is something you’re going to tune into. If we do get a great response, I think at the league office we’ll talk about what the future of games in crazy, beautiful, wonderful landmark places happens to be as we look to the future.”

Playing the game on a golf course next to Lake Tahoe is a much more complicated endeavor than the usual process of going into an existing stadium with infrastructure already in place and building a rink inside.

Workers needed to run pipes from the Mobile Refrigeration Unit and build everything from locker rooms, to GM booths, to replay facilities.

But once that is all in place, the process is the same as in the stadiums with a stage being built on top of the grass and interlocking aluminum pans on top. The refrigeration feeds coolant into the trays and the process begins to form the 2-inch surface of ice.

That process began last week and the rink will be ready in time for practices Friday in a most picturesque setting.

“It’s kind of the ‘Wow’ factor,” NHL senior manager of facilities operations Derek King said. “I think all the venues we’ve been in have been amazing. Hearing that we’re coming to Lake Tahoe to build it on a golf course, this is a true outdoor game. It’s definitely exciting. I think this would be one of my most unique outdoor events."

The NHL usually has about a year to plan outdoor games with several site visits from different groups before the process of putting it all together even begins.

None of that happened this time with league officials taking their only visit to the site in December and immediately jumping at the opportunity.

“I think it was the old expression, ‘You had us at hello,’” Mayer said. “We walked out to where the location happens to be and we just took a quick look around and we were like, ‘We’re going to make this work.’ Usually we would come to a site multiple times for planning purposes. We thank the lord for Google Earth and other great pictures of this venue that we were able to work with and kind of develop the plan. It’s a unique year, unique times. We were able to put it all together.”

Part of NBC’s Sunday broadcast will be a documentary about retired play-by-play announcer Mike Emrick. “Doc Emrick — The Voice of Hockey” will air at 2 p.m. EST before Bruins-Flyers and include 20 current and former players and broadcasters sharing their thoughts on “Doc.”

Emrick hasn’t seen it and doesn’t want to know anything about it until it airs. He and wife Joyce are “just going to watch it like everybody else.”

“It’s like a present,” Emrick said. “They’re doing a really nice thing for me. And I would rather not ask a lot of questions about, well, what are you getting me for Christmas?”

Among the teams with their seasons put on pause because of the virus, Buffalo returned to game action Monday, Minnesota and New Jersey on Tuesday and Philadelphia is scheduled to play again Thursday.

The Flyers got back on the ice for practice Tuesday with seven players still on the league’s COVID protocols list. Coach Alain Vigneault doesn’t expect any of them to be available for his game against the Rangers.

“You can never say you’re out of the woods, but certainly in the last four days we’ve seen a positive trend,” general manager Chuck Fletcher said. “We’re hopeful that we can continue in that direction and get back to playing here.”

The Toronto Maple Leafs visit the Montreal Canadiens on Saturday for the fourth meeting of the season between the top two teams in the North Division.