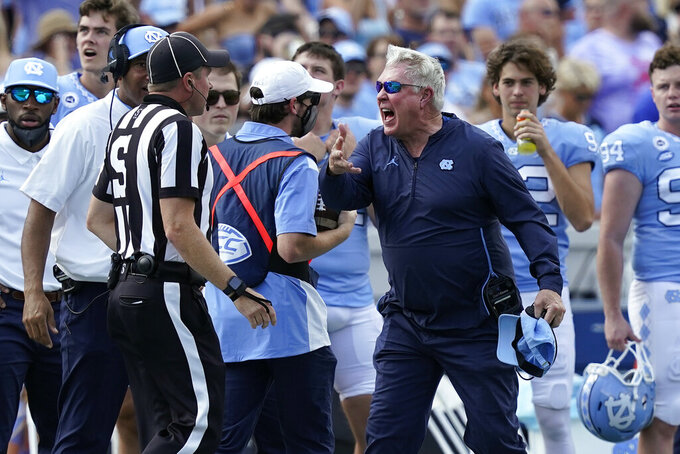 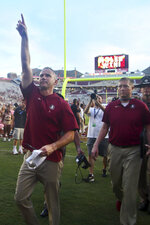 North Carolina has looked like the team many expected in the preseason when playing at home. That could give the Tar Heels a chance to string together a win streak in the first half of October.

The Tar Heels enter Saturday’s visit from Florida State with all three wins coming at home by comfortable margins, including by 20 points against Virginia and 31 points against rival Duke last weekend. This will be the second of three straight league home games before a nonconference trip to No. 14 Notre Dame.

To listen to Brown, the Tar Heels (3-2, 2-2 ACC) are stuck somewhere in between in the third year of his second coaching stint in Chapel Hill. They have lost both road games, first to Virginia Tech in the season opener and later a lopsided loss at Georgia Tech.

North Carolina averages 52 points and 587.3 yards per game in its three home games compared to 16 points and 361.5 yards on the road, going from No. 10 in the preseason AP Top 25 and the preseason Coastal Division favorite to unranked before October.

The Seminoles (1-4, 1-2) are coming off a win against Syracuse on a final-play field goal. But they have lost all five of their road games so far under second-year coach Mike Norvell. The only one this year was a mistake-filled 35-14 loss at No. 19 Wake Forest with six turnovers.

“I thought our guys, there was a fair balance of the excitement of a win, the celebration you get to have, but also the sense of urgency for improvement,” Norvell said of practicing after the Syracuse win. “That’s our ultimate focus, are we playing our best football?”

Some other things to know about Saturday’s FSU-UNC game:

UNC is honoring late FSU coaching great Bobby Bowden, who died in August. The school tweeted that it has put up the Bowden logo, featuring his preferred practice hat and his signature, in Kenan Stadium near the section where visiting fans typically sit for games.

Florida State quarterback Jordan Travis has battled injuries but is coming off a big performance against Syracuse.

He broke the program record for career rushing yards by a quarterback (now 932) during his career-high 113-yard performance . Former Heisman Trophy winner Charlie Ward held the previous record of 889 yards.

Travis is listed atop the depth chart this week ahead of UCF graduate transfer McKenzie Milton, who nearly sparked an upset of Notre Dame in the opener in his return from a serious leg injury from 2018.

“Jordan Travis started the season as our starting quarterback for a reason,” Norvell said.

Florida State has yet to lose to Brown, a 1973 graduate of the school.

The Seminoles have won all 10 meetings, the first three coming when Brown was at Tulane between 1985-87. The next six came during Brown’s first stint in Chapel Hill, where he built the Tar Heels into top-10 status in 1996 and 1997 but couldn’t beat the Seminoles operating at their 1990s peak.

Florida State and North Carolina have had some recent defensive improvement.

The Tar Heels held the rival Blue Devils to a single touchdown. And the Seminoles had a run of holding Louisville and Syracuse scoreless for 12 straight drives in the past two weeks while allowing them to convert just 3 of 20 third downs in the last six quarters.

Florida State pulled off a big upset in last year’s game, building a huge early lead and then holding on late to beat the then-No. 5 Tar Heels in Tallahassee. This is FSU's first trip to UNC since 2009.

“We kind of had everything we wanted in front of us and we kind of lost it all right there,” UNC quarterback Sam Howell said, adding: "We definitely, definitely want this one bad.”