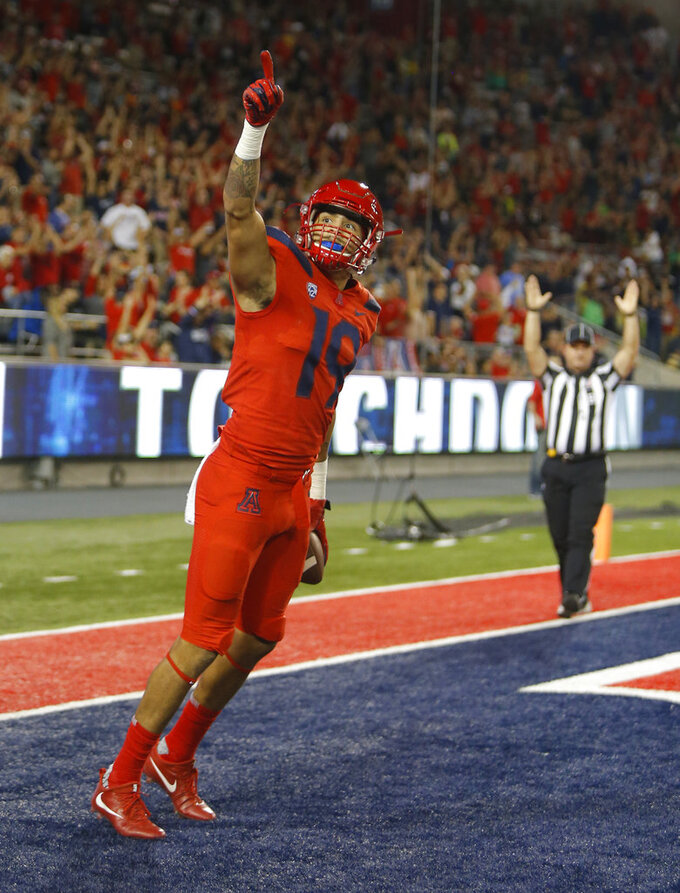 Arizona wide receiver Shawn Poindexter celebrates after scoring a touchdown in the first half during an NCAA college football game against Oregon, Saturday, Oct. 27, 2018, in Tucson, Ariz. (AP Photo/Rick Scuteri) 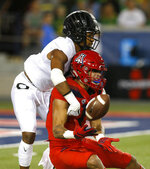 TUCSON, Ariz. (AP) — J.J. Taylor burst through holes and leaped over defenders. Khalil Tate was sharp in his return. The defense created turnovers, so did special teams.

Stuck in a recent rut, Arizona picked a great time to play its best game of the season.

Taylor ran for 212 yards and two touchdowns, Tate threw for three scores and the Wildcats dominated No. 19 Oregon 44-15 on Saturday night.

Arizona (4-5, 3-3 Pac-12) jumped on the Ducks early and never let them up, turning one Oregon miscue after another into scores.

Tate threw for 189 yards on 19-of-33 passing with an interception after missing last week's game against UCLA with a left ankle injury. Shawn Poindexter caught two touchdown passes and Josh Pollack kicked three field goals for Arizona, which had lost three of four.

"That was my first time missing a game in my whole football career, so that was something different for me to adjust to," Tate said. "I knew I had to bounce back and lead my team to a W."

Oregon (5-3, 2-3) got off to a slow start for the second straight week, committed three turnovers and two costly mistakes on special teams. The Ducks were forced to pass after falling behind early and had 270 total yards — 190 below their average — against one of the Pac-12's worst defenses.

"This was a gut check," coach Mario Cristobal said. "We've got to make sure we're working the right way, doing the right things and enhancing those things, and getting ready to take the brunt of what comes with a loss like this."

Oregon fell behind 27-0 by halftime last week, preventing any chance of a comeback in a 34-20 loss to No. 14 Washington State.

The Ducks got stuck in the starting gate again in the desert.

Oregon's offense sputtered early and the Ducks kept turning it over to give the Wildcats short fields.

The Ducks finally got some momentum going with Herbert's 29-yard TD pass to Dillon Mitchell, but Arizona followed with an 18-play scoring drive capped by Taylor's 1-yard run to lead 23-8 at halftime.

"I thought we had some momentum there, but they came right back and scored," Cristobal said.

Tate opened the second half with an 8-yard TD pass to Poindexter, then found Shun Brown for a 27-yard score after a punt hit an Oregon player and Arizona recovered.

Taylor capped the rout by leaping over a defender into the end zone on a 19-yard TD run in the fourth quarter.

Oregon will likely drop out of the AP Top 25 after a second straight ugly loss.

Arizona overwhelmed the Ducks in all three phases to move a step closer to bowl eligibility in Sumlin's first season.

Widely considered a top NFL draft prospect, Herbert did not have an eye-popping performance. He threw for 186 yards on 24-of-48 passing with two touchdowns and an interception.

Cristobal put the blame on the entire offense, not just his junior quarterback.

The Ducks faced third-and-long numerous times in the first half, which allowed Arizona to rush Herbert without worrying about the run. Oregon also was limited to 84 yards rushing on 23 carries.

"As an entire offense, we've got to do a better job of getting him into a rhythm," Cristobal said. "We've got to get on a better schedule where we're not facing a lot of third-and-9s, third-and-10s."