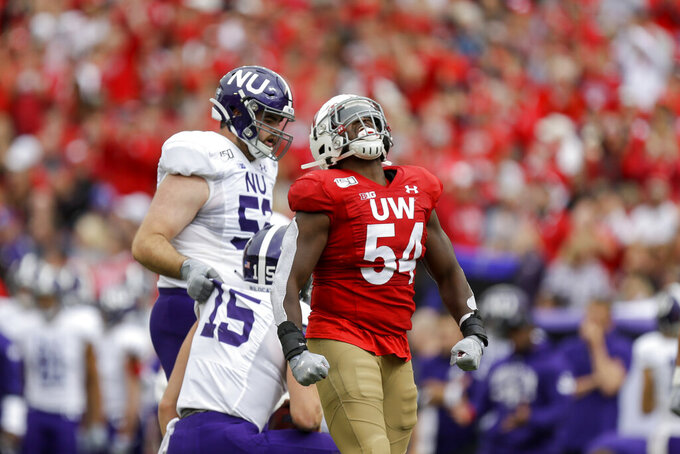 No. 8 Wisconsin steps out of Big Ten play to host Kent State at Camp Randall Stadium, where the Badgers have won 48 of their last 49 nonconference games. The Golden Flashes, coached by former Wisconsin QB and TE Sean Lewis and coming off a bye, look to capture one of the biggest wins in program history.

Wisconsin: RB Jonathan Taylor has rushed for at least 100 yards in each of the Badgers’ four games this season. Taylor is fourth on Wisconsin’s career rushing list with 4,730 yards. ILB Chris Orr was named Big Ten Defensive Player of the Week on Monday after recording nine tackles, two sacks and a forced fumble in the Badgers’ 24-15 win over Northwestern.

Lewis, 31, was named the Kent State coach on Dec. 21, 2017, becoming the youngest FBS head coach ever. ... Lewis played for Wisconsin from 2004-07. ... RB Jo-El Shaw is averaging 5.1 yards per carry for the Golden Flashes and WR Isaiah McKoy had four receptions for 85 yards and a score against then-No.8 Auburn on Sept. 14. .... The Badgers have outscored their opponents 169-29 this season. ... The Wisconsin defense has scored three touchdowns while allowing just four touchdowns this season. ... Wisconsin has allowed opponents to convert a nation-low 15.5% of their third-down attempts. ... QB Jack Coan has won his last six starts, with Wisconsin averaging 41.8 points in those games. ... Taylor has gone over 100 yards rushing in nine straight games, longest active streak in the country. ... Taylor has scored an FBS-best 11 total touchdowns this season.