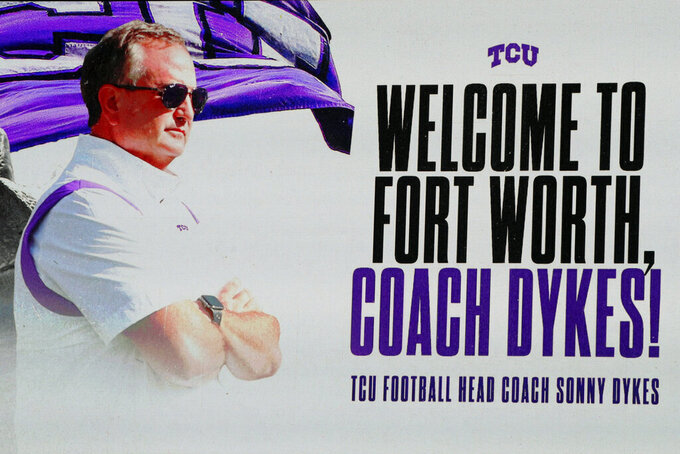 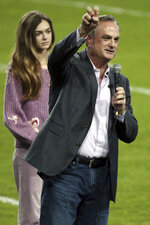 FORT WORTH, Texas (AP) — Sonny Dykes landed as TCU's coach Monday night, arriving at the purple-lit stadium in a helicopter that settled down near midfield.

After weeks of speculation, TCU announced his hiring when welcoming Dykes back to the Fort Worth campus to meet with his new team.

Dykes spent the past four seasons at SMU before his return to the other side of the Dallas-Fort Worth metroplex. The son of former Texas Tech coach Spike Dykes had been considered a top candidate for the Frogs job since Gary Patterson and TCU mutually agreed Oct. 31 to part ways with four games left in the season.

The 52-year-old Dykes worked as an offensive analyst at TCU in an off-field role for Patterson during the 2017 season.. He became SMU’s coach when Chad Morris left for Arkansas at the end of that regular season, and went 30-18 with the Mustangs. He was previously head coach at Cal and Louisiana Tech.

Dykes briefly addressed several hundred students and fans who were at the stadium, telling them he couldn't wait to get started at what he called a special place. He then went to the end zone for a long blast on The Frog Horn as fireworks went off overhead.

The helicopter landed near where there was a scuffle when SMU players attempted to plant a flag displaying the Dallas school’s “D” logo after the Mustangs' 42-34 victory there Sept. 25. Dykes apologized during his postgame comments for what Mustangs players did with the flag.

That SMU victory, in the 100th game between the schools, marked consecutive wins for the Mustangs in the series for the first time since 1992-93, when both were still in the old Southwest Conference. Their next scheduled meeting is Sept. 24 in Dallas.

Dykes oversaw SMU's best overall stretch of success since the program returned in 1989 after being the only team ever to serve the NCAA’s so-called death penalty.

The Mustangs went 5-7 in Dykes’ first full season in 2018 after an 0-3 start. Then with an influx of transfer players, most of them returning home to North Texas like quarterback Shane Buechele, SMU started 8-0 in 2019 on way to a 10-3 record. The Mustangs then won their first five games in the pandemic-shortened 2020 season and finished 7-3.

SMU started 7-0 this season before losing four of the past five games. The Mustangs recognized 32 seniors before the Tulsa game.

TCU had its third losing season in six years, after only two the previous 18 seasons. That 24-season span included Patterson’s three years as defensive coordinator before his promotion when Dennis Franchione left at the end of the 2000 regular season to become Alabama’s coach.

While TCU did a nationwide search, athletic director Jeremiah Donati had familiarity with the coach at the school about 40 miles away that fit the primary requirements set out for Patterson's replacement.

Dykes was a current head coach, and one who understands the changing climate of college football such as name, image and likeness, and the transfer portal. Donati also had indicated his desire to find an offensive coach.