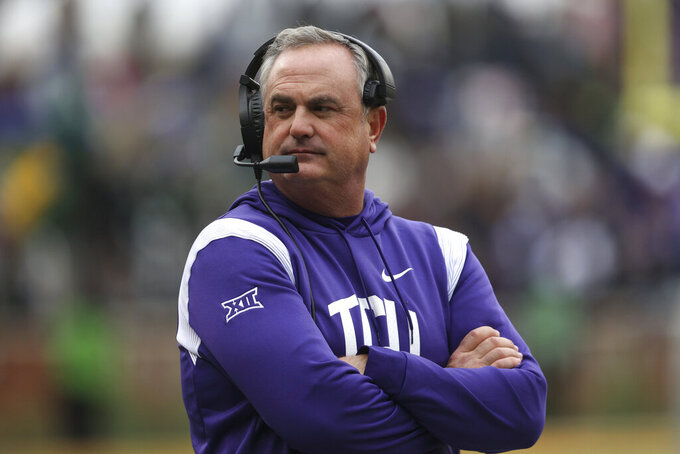 TCU head coach Sonny Dykes on the sidelines of their game against Baylor at McLane Stadium in Waco, Texas on Saturday, Nov. 19, 2022. The Horned Frogs won 29-28 against the Bears. (Madeleine Cook/Star-Telegram via AP)

NORMAN, Okla. (AP) — Change is afoot in the Big 12 — even before Oklahoma and Texas depart for the Southeastern Conference.

Fourth-ranked TCU has replaced the Sooners as the Big 12 team in the running for a College Football Playoff spot. Oklahoma won the conference and made the playoff in 2015 and from 2017-19. This year, the Horned Frogs (11-0, 8-0 Big 12) have clinched a berth in the conference title game and are positioned to be the league's playoff team. TCU hosts Iowa State on Saturday in its regular-season finale.

No. 15 Kansas State (8-3, 6-2) is a surprise contender for the other spot in the championship game after being picked to finish fifth in the league. The Wildcats would make the title game if No. 24 Texas loses to Baylor on Friday. If Texas wins, Kansas State would need to beat rival Kansas on Saturday night to qualify.

Meanwhile, frequent contenders Oklahoma and Oklahoma State are out. The championship game, to be played Dec. 3, will be the first since the game returned in 2017 without a team from Oklahoma. And defending champion Baylor can only play spoiler by knocking Texas (7-4, 5-3) out of title contention.

TCU coach Sonny Dykes said the changes are a sign of the Big 12's strength. The Horned Frogs will be playing in the title game for the second time.

“Sometimes people dismiss it as, ‘Well, the league stinks,’" he said. “Well, if the league stunk, it seems like it would be the same team that was there every year. I do remember a time in the Big 12 where Oklahoma was in the championship game almost every year.”

Oklahoma won the title each year from 2017 to 2020 and was in the running to reach the championship game all the way until the regular-season finale last season under coach Lincoln Riley. But the Sooners — picked to finish second in the league — are 6-5 under Riley's replacement, Brent Venables.

Oklahoma has three conference losses by seven or fewer points. Venables said there are no easy games in the league.

Oklahoma State reached the title game last year and looked ready to return after opening the season with five straight wins. But quarterback Spencer Sanders suffered a shoulder injury and the Cowboys' season started to tumble. A less-than-healthy Sanders, playing behind a banged-up offensive line, threw four interceptions in a 28-13 loss to Oklahoma last Saturday.

“I mean, I could be real obvious and say if we don’t get guys injured, that would help," Oklahoma State coach Mike Gundy said. “Yeah, but I mean, try to be nice. Just got a few guys beat up. So unfortunately, we’re down a few guys.”

Even Texas making the title game would be unusual. The Longhorns have only reached the championship game once since the event's return, and they haven't won the league title since 2009.

No matter what, the second-place team will have at least two losses, and possibly three. In an example of the Big 12's depth, Iowa State — TCU’s opponent on Saturday — is in last place in the league standings, but leads the conference in scoring defense and total defense and ranks eighth nationally in both categories.

“It says exactly what this league is ... that it is really good from top to bottom and there’s a ton of parity, and it’s really, really difficult with the schedule that you have to go through in this league to go through unscathed,” Dykes said.

AP Sports Writer Stephen Hawkins in Fort Worth, Texas, contributed to this report.