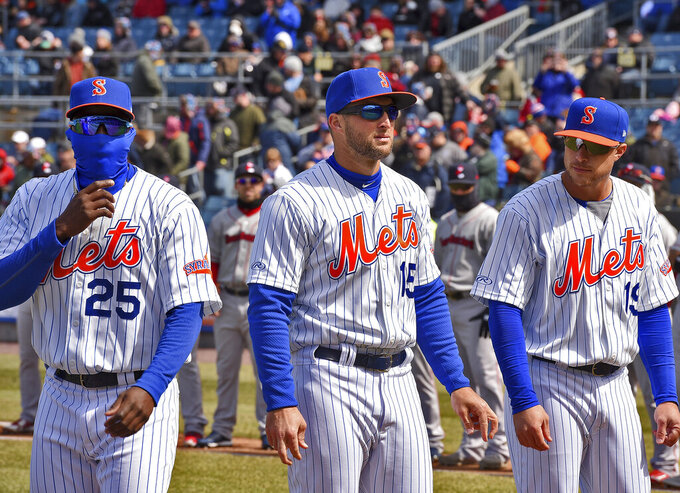 Tim Tebow, center, stands with Syracuse Mets teammates before a Triple-A baseball game against the Pawtucket Red Sox in Syracuse, N.Y., Thursday, April 4, 2019. The former NFL quarterback and Heisman Trophy winner went 0 for 4 for the top minor league affiliate of the New York Mets. He wasn't available for comment after the Syracuse Mets lost to the Pawtucket Red Sox 6-3 in 10 innings. (Michael Greenlar/The Post-Standard via AP)

SYRACUSE, N.Y. (AP) — Tim Tebow had no hits in his Triple-A debut and nothing to say about it.

The former NFL quarterback and Heisman Trophy winner went 0 for 4 on Thursday for the top minor league affiliate of the New York Mets. He wasn't available for comment after the Syracuse Mets lost to the Pawtucket Red Sox 6-3 in 10 innings.

"Tim will be fine. Triple-A is a little different," Syracuse manager Tony DeFrancesco said. "They match up with him. The lefties give him a tough time. He chased some pitches out of the zone, but overall I think they're going to try to pound him in and he's got to make adjustments. Defensively, he caught what he was supposed to catch. I think he did a decent job."

The 31-year-old Tebow drew a nice cheer from the crowd of 8,823 when he was introduced as the left fielder on a crisp, sunny day with the temperature hovering around 40 degrees.

In his first at-bat against Boston's top farm team, Tebow worked the count to 3-0, took a called strike, then swung and missed the next two pitches against right-hander Mike Shawaryn.

Tebow, who batted sixth, also grounded out weakly to first in the fourth inning and grounded out to second in the sixth with a runner in scoring position.

Almost a year ago to the day, Tebow made his Double-A debut an hour south in Binghamton and went 1 for 4. He made a lasting impression, though, by hitting the first pitch he saw for a three-run homer.

The stage was set again for him in the bottom of the eighth on Thursday and the score tied at 3. He stepped in against reliever Marcus Walden with two outs and two men on, but Rajai Davis was caught trying to steal third to end the threat.

Moments later, Tebow struck out swinging to lead off the bottom of the ninth.

The loss didn't matter one bit to Fred Simonds Jr. of Syracuse, who was with his dad at the International League game and screaming with delight.

"So far, it's been awesome," Fred Simonds Jr. said. "I think everything about it has been awesome. You can't change the weather, but I'm glad he's here. This is going to be great."

In the field, Tebow caught two high flyballs and also slipped and fell while fielding a hit in the fifth, but recovered quickly to prevent the runner from advancing. He also was unable to track down Tony Renda's go-ahead, three-run double to left center in the top of the 10th.

"I know they were out there to watch everybody, especially Tebow," Syracuse outfielder Gregor Blanco said. "That's what we want. He was good, really focused. He was pumped. The (game) didn't come out the way he wanted it to, but I think he was excited. I'm excited."