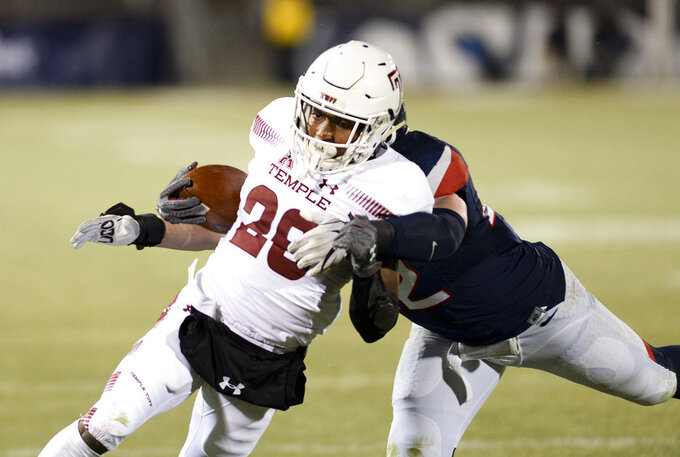 Temple wide receiver Travon Williams (26) runs the ball in for the team's seventh touchdown late in the second half of an NCAA college football game against Connecticut, Saturday, Nov. 24, 2018, in East Hartford, Conn. (AP Photo/Stephen Dunn) 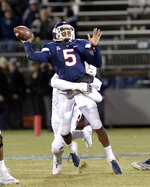 EAST HARTFORD, Conn. (AP) — Temple finished the regular season with a blowout win on its way to a bowl game, while sending UConn into the NCAA record book for all the wrong reasons.

Owls receiver Isaiah Wright, a Connecticut native who played high school ball in nearby West Hartford, ran for a touchdown and returned a kickoff for another as Temple routed the Huskies 57-7 on Saturday.

The Owls (8-4, 7-1 American), who started the year 0-2, finished the regular season with three straight wins and victories in six of their final seven games.

It took Temple just two minutes to go 71 yards for the first score of the game, an 18-yard run from Wright, who took a pitch on an option play. After UConn tied the game at 7 a few minutes later, Wright grabbed the kickoff at the 1-yard-line, and went 99 yards straight up the middle of the field for a touchdown.

"Previously playing UConn, I never really did what I felt like I should do," the junior said. "So, coming into this game, I just wanted to make sure I didn't feel the same way I felt prior."

The Owls scored on seven of their eight first-half possessions and led 40-7 after two quarters. They never took their foot off the gas pedal and finished with 516 total yards.

"They just keep playing," said Temple coach Geoff Collins. "If we're down at halftime or if we're up by 33 at halftime, we just want to play our brand of football. "It's a pretty good brand."

UConn, on the other hand, has some work to do on its football reputation.

At one point during the second quarter, UConn threw an interception and fumbled three times on consecutive offensive plays. The Huskies recovered the last two fumbles, but threw another interception on the next play, which was run back by Temple's Christian Braswell for a touchdown.

"2018 is over, 2019 starts tomorrow," said UConn coach Randy Edsall. "And guys have to have a resolve to work and get bigger, faster, stronger, because it's the only way you are going to be able to compete."

Kevin Mensah rushed 24 times for 94 yards for UConn, giving him 1,045 yards for the season.

UConn: The Huskies did not beat an FBS opponent this season. The Huskies also went winless in conference play for the first time since it went 0-4 in the Yankee Conference in 1954.

Temple: Wright now has three returns for scores this season. He also had punt returns of 73 yards against USF and 59 yards against East Carolina this season. Temple's defense or special teams have scored in nine of the Owl's 12 games.

"(Wright) is as dynamic a kick and punt returner as there is in college football," Collins said. "I'm just really proud of who he is and the type of competitor and playmaker he is."

NO RUSSO, NO PROBLEM

Temple quarterback Anthony Russo did not dress and was on the sidelines with a cast on his right hand. Backup Frank Nutile, who started the first two games of the season, completed 9 of 12 passes for 184 yards and an interception. Redshirt freshman Todd Centeio went 3 for 3 for 39 yards and a touchdown. He also ran six times for 32 yards and a score.

Temple running back Ryquell Armstead (five carries, 56 yards), came up limping after a 31-yard run in the second quarter that set up a touchdown. He did not return. Collins declined to say whether he or Russo would be ready for the bowl game.

UConn's season is over.