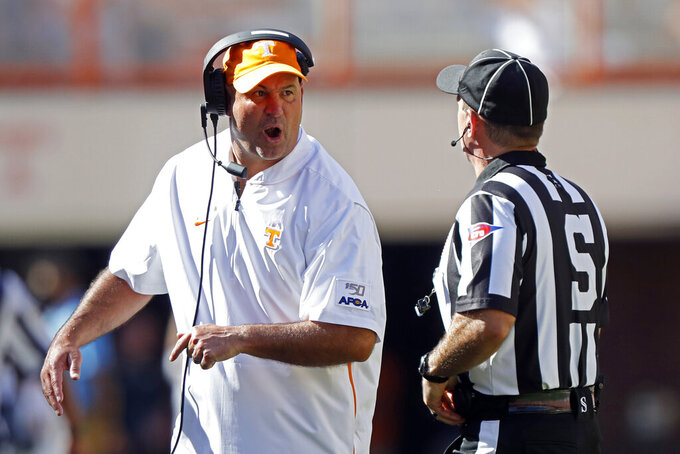 KNOXVILLE, Tenn. (AP) — Tennessee's Jeremy Pruitt built defenses that feasted on turnovers during his career as an assistant. Now that he's a head coach, Pruitt is still waiting for his Volunteers to develop a similar knack.

Their next opportunity comes Saturday when Tennessee hosts a BYU team that failed to protect the football in its season opener.

Tennessee has only 16 takeaways in its first 13 games under Pruitt, including just one last week in a 38-30 season-opening loss to 26-point underdog Georgia State. Pruitt's defenses forced 27.8 turnovers per year during his five seasons as a defensive coordinator at Florida State (2013), Georgia (2014-15) and Alabama (2016-17).

"The first way to create turnovers is to hit people, OK," Pruitt said. "There's nothing like a good old-fashioned hit, right? We've all seen it."

While Pruitt wants his team to force turnovers, BYU wants to stop giving the ball away. The Cougars committed three turnovers that led to touchdowns in their 30-12 season-opening loss to No. 13 Utah.

"I've got to be smarter with the ball in my hands and execute better," Wilson said.

BYU coach Kalani Sitake remains confident in Wilson, who threw 12 touchdown passes with only three interceptions in 182 attempts as a freshman. Pruitt has said Wilson's ability to run around and extend plays "kind of reminds me of Johnny Manziel," a reference to the 2012 Heisman Trophy winner from Texas A&M.

Sitake noted that Utah has the kind of defense that often forces teams into making bad decisions.

"They're a high-intense defense which causes a lot of mistakes and mishaps, and that's what they live off," Sitake said.

Pruitt typically has those kinds of defenses as well.

During Pruitt's five seasons as a defensive coordinator, his defenses never produced fewer than 22 turnovers in any given year.

But he hasn't been able to build that kind of defense at Tennessee just yet. Texas A&M is the only SEC team that has forced fewer turnovers than Tennessee since the start of the 2018 season.

"You probably won't win as a team if your defense is not creating a lot of turnovers, causing havoc in the backfield and putting pressure on the quarterback," Tennessee outside linebacker Darrell Taylor said after the Georgia State game.

Indeed, Tennessee has produced 10 takeaways in its five wins but has forced a total of six turnovers in its eight losses since Pruitt's arrival. Tennessee failed to deliver more than one takeaway in any of those eight defeats.

Tennessee's loss to Georgia State underscored the importance of turnovers.

The Vols briefly took the lead early in the fourth quarter by driving for a field goal after Deandre Johnson sacked Georgia State quarterback Dan Ellington to force a fumble that LaTrell Bumphus recovered. But that's the only takeaway Tennessee produced on a day when Georgia State scored 17 points off three Tennessee turnovers.

Pruitt said Tennessee's defense must adopt more of an aggressive, hard-hitting mentality each time it takes the field. Once that happens, the turnovers will start coming.