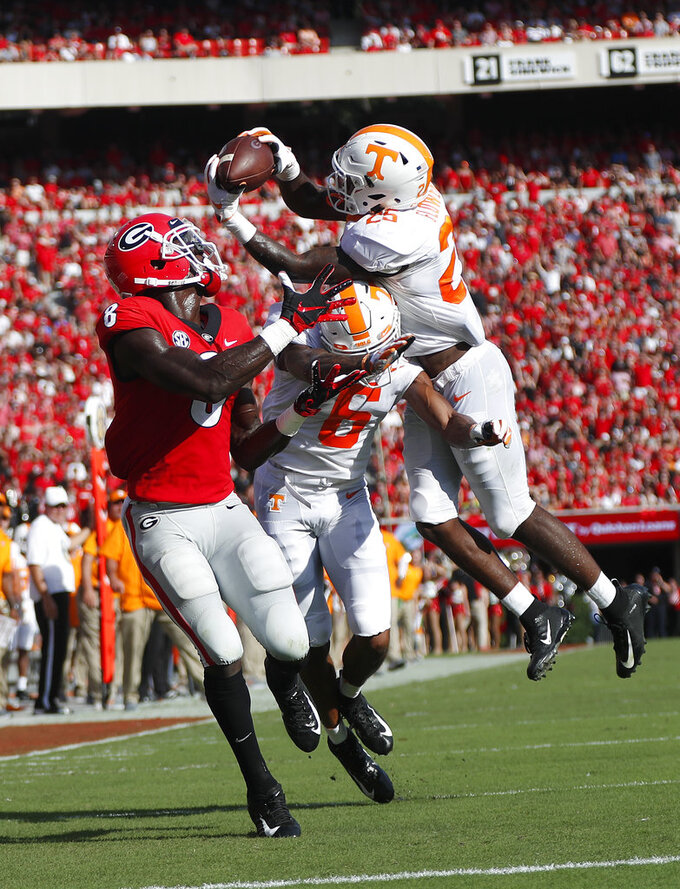 FILE - In this Sept. 29, 2018, file photo, Tennessee's Trevon Flowers (25) intercepts a pass as he and Alontae Taylor (6) defend against Georgia wide receiver Riley Ridley (8) during an NCAA college football game in Athens, Ga. Flowers has a broken collarbone that will sideline him for the next few weeks, hindering the depth of the Volunteers' young secondary as they deal with the toughest portion of their schedule. (AP Photo/John Bazemore, File)

KNOXVILLE, Tenn. (AP) — Tennessee safety Trevon Flowers has a broken collarbone that will sideline him for the next few weeks, hindering the depth of the Volunteers' young secondary as they deal with the toughest portion of their schedule.

Vols coach Jeremy Pruitt said Monday that Flowers was hurt while diving for an interception in practice during Tennessee's off week. Pruitt said Flowers has undergone surgery and that "he'll be back in a few weeks."

"It's unfortunate for him because he really had improved in the last two or three weeks and had a great off week this past week," Pruitt said.

Flowers joined cornerbacks Alontae Taylor and Bryce Thompson as true freshmen who have earned substantial playing time in Tennessee's secondary. Flowers started a season-opening loss to No. 6 West Virginia and got plenty of playing time in a reserve role during Tennessee's next four games.

The 5-foot-11 Flowers, who is from Tucker, Georgia, has nine tackles this season.

"He was definitely playing very well," senior safety Micah Abernathy said. "He's a learner. He tries to take as much as he can in and apply it to any play, pretty much. He's a learner, like I said. (With) the depth in the secondary, it's a next-man-up mentality like we've always had."

The injury hurts the Vols' defense at an inopportune time.

Tennessee (2-3, 0-2 SEC) is midway through a stretch of four straight games against teams currently in the Top 25.

At least the off week gave Tennessee some time to recuperate in the midway point of this brutal stretch. Tennessee has lost 11 straight games against SEC opponents and hasn't beaten a conference foe since November 2016.

Flowers' injury leaves Tennessee short on depth behind the starting safety duo of Abernathy and junior Nigel Warrior. Sophomore safety Theo Jackson has participated in each of Tennessee's five games and could get more playing time with Flowers out.

A more experienced option is Todd Kelly Jr., but Pruitt said the fifth-year senior is still working his way back from injuries.

Kelly had a team-high 71 tackles in 2016 but has appeared in just three games since. Kelly played in only two games in 2017 due to a knee injury and got hurt again during an offseason incident in which he fell from a wall. He made his 2018 debut with a special-teams appearance against Georgia.

"He's taking baby steps, which is a credit to him because he had a severe injury, and having to work hard to get back from (that), it would have been easy for him to say, 'You know what? I'm just going to move on and be done with football,' " Pruitt said. "But he's not (moving on). He came back and he's worked extremely hard. He's getting a little bit better each week."