Tennessee, Missouri meet as they head in opposite directions 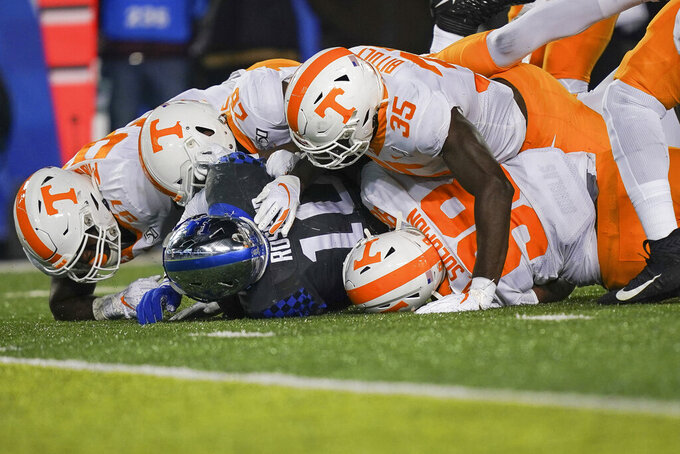 Kentucky running back Asim Rose (10) is tackled by several Tennessee defenders during the second half of an NCAA college football game Saturday, Nov. 9, 2019, in Lexington, Ky. (AP Photo/Bryan Woolston)

Tennessee’s road to a bowl bid is straightforward, whereas Missouri’s path looks a bit more complicated.

Yet both stand just one win away from potential bowl eligibility as two teams headed in opposite directions prepare to face off Saturday at Missouri.

Tennessee (5-5, 3-3 SEC) has won three consecutive games to bounce back from a 1-4 start. The Volunteers have allowed a total of 20 points over their last 10 quarters and believe they still have plenty of room for improvement.

Missouri (5-5, 2-4) has lost four straight and has an unclear postseason future no matter how it fares in its last two games Saturday against Tennessee and Nov. 29 against Arkansas (2-8, 0-6) at Little Rock, Arkansas.

The Tigers received a bowl ban as part of their NCAA sanctions for an academic misconduct case involving a former tutor. Missouri has appealed the ruling.

Missouri coach Barry Odom said his team has done a good job of preventing the bowl uncertainty from becoming a distraction, but he acknowledged that task becomes tougher the longer the situation drags on.

“If we’re spending a lot of time thinking about that, then that takes away from our ability on what we need to do to prepare to be at our best,” Odom said. “Hopefully we get a resolution here pretty quickly, but also we’ve learned we’ll continue to be patient and we need to make sure we understand the opportunity of living in the here and the now.’

Tennessee is seeking to earn its first bowl berth since 2016, but the Volunteers would have plenty of motivation in this game even if there weren’t any postseason implications.

Missouri has trounced Tennessee by an identical 50-17 score each of the last two years. This game offers a chance for Tennessee to show how far it has come in Pruitt’s second season.

“I think it’s going to mean something this year,” Warrior said. “We’re going to play harder than we ever have before.’’

Here are some things to watch when Missouri hosts Tennessee.

Tennessee has shuffled its quarterbacks during this late-season run.

Brian Maurer missed two games while recovering from concussions before starting in a 17-13 victory over Kentucky two weeks ago. Jarrett Guarantano took over in the second half of the Kentucky game and rallied Tennessee from a 13-3 deficit. J.T. Shrout also has received ample playing time.

Pruitt said Wednesday he has decided on a starting quarterback for Saturday’s game but wouldn’t identify which player will take the first snap.

Some other things to know about Saturday’s Tennessee-Missouri matchup:

Missouri has scored a total of 27 points during its four-game skid and hasn’t exceeded seven points in any of its last three contests.

Tennessee historically has brought out the best in Missouri’s offense. Missouri has averaged 45.7 points and 627.7 yards in its last three matchups with the Vols.

Pruitt and Missouri quarterback Kelly Bryant have faced before when the stakes were much higher.

Bryant was Clemson’s starting quarterback and Pruitt was Alabama’s defensive coordinator in 2017 when the Crimson Tide allowed just 188 total yards in a 24-6 College Football Playoff semifinal victory. Alabama went on to win the national title that season.

After struggling to take care of the ball early in the season, Tennessee has committed only two turnovers during its three-game winning streak.

Tennessee must protect the football against Missouri, which makes the most of its takeaways.

Missouri has five defensive touchdowns this season to rank second among all FBS teams. Missouri has scored touchdowns after each of its last 13 interceptions, a streak that began during its victory over Tennessee last year.