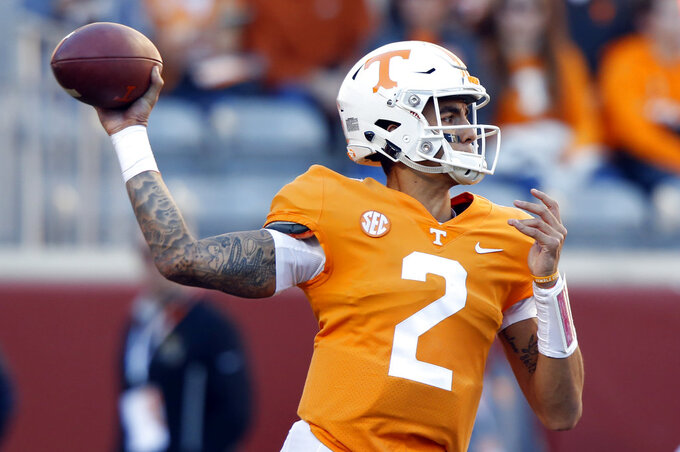 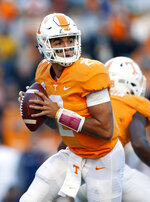 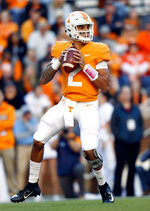 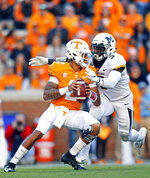 KNOXVILLE, Tenn. (AP) — Tennessee is trying to manage an uncertain quarterback situation as it prepares to visit Vanderbilt this week with a bowl bid at stake.

An injury prevented Jarrett Guarantano from playing the final three quarters of a 50-17 loss to Missouri last week. An injury also knocked wide receiver Marquez Callaway out of the Missouri game early.

"As far as Jarrett, he'll be day to day this week, and probably the same thing with Callaway," Tennessee coach Jeremy Pruitt said Monday.

Pruitt said Callaway has a bruised chest. Pruitt hasn't specified the nature of Guarantano's issue, but it was described on the television broadcast as a head/neck injury.

On the first series of the game, Missouri's Tyree Gillespie came from the blind side to sack Guarantano and appeared to hit the quarterback around the back of the neck while bringing him down. Television cameras showed Guarantano with his head in his hands as he sat on the sideline.

He remained in the game for the next two series before leaving for good. Guarantano was sacked on each of Tennessee's first two possessions.

Guarantano has been sacked 21 times this year and is working behind a line that lost preseason all-SEC tackle Trey Smith to blood clots in his lungs and Alabama graduate transfer Brandon Kennedy to a knee injury. Guarantano's tendency to hold on to the ball too long occasionally makes him prone to sacks as well.

Stanford graduate transfer Keller Chryst took over for Guarantano and played well early before struggling the rest of the way. Chryst completed four of his first five passes for 108 yards but went 3 of 15 for 65 yards with two interceptions the rest of the way.

"Keller is a hard worker," Pruitt said after the game. "He's been great for our program. Our kids love him. He's a good leader, and he's got some experience. I know there are a few throws he'd like to have back, but he did a good job moving the ball. He's got toughness, but there were a couple plays there where we turned the ball over that probably hurt us a little more. And if it wasn't for those plays, he probably did a good job."

Whichever quarterback plays Saturday will have a much better chance of success if Callaway is available.

Callaway caught two passes for 98 yards against Missouri before his early exit. He has 34 catches for 556 yards this season to lead Tennessee in both categories.

"I think he's going to be in a black jersey, no contact for a couple of days," Pruitt said Monday. "He had a bruise to his chest area. He's a tough guy. I'm sure he'll be out there ready to go."

Tennessee (5-6, 2-5 SEC) and Vanderbilt (5-6, 2-5) both must win Saturday to secure bowl eligibility. Tennessee also is trying to end a two-game losing streak in a rivalry it has traditionally dominated.

Vanderbilt's 45-34 victory over Tennessee in 2016 likely cost the Vols a Sugar Bowl berth. The Commodores' 42-24 triumph at Neyland Stadium last year caused Tennessee to set a school record for losses and capped a season in which the Vols went winless in SEC play. Tennessee is 2-4 against Vanderbilt over the last six years after going 28-1 in this series from 1983-2011.

"When I was a freshman, they were dancing on the field (afterward)," Tatum said. "It was pretty embarrassing. I never want to feel that feeling again."