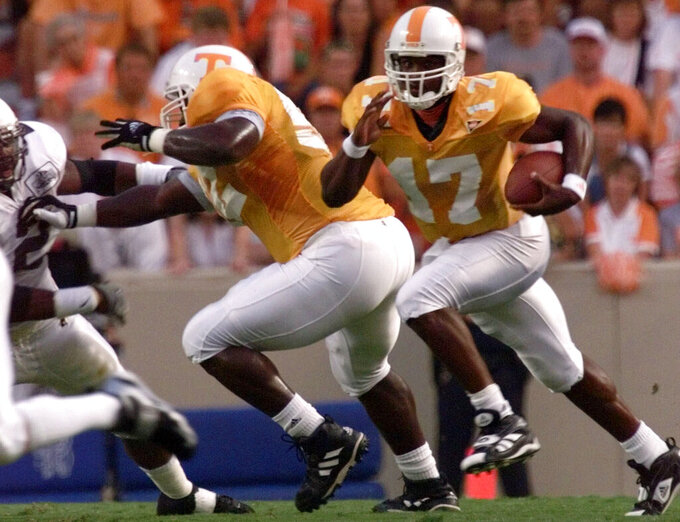 FILE - In this Sept. 4, 1999, file photo, Tennessee quarterback Tee Martin (17) runs through a hole made by teammate Cosey Coleman (52) during their 42-17 win over Wyoming in Knoxville, Tenn. Tennessee’s wide receivers savor the opportunity to play for their new position coach because they appreciate what Tee Martin accomplished during his own playing career. Martin was the starting quarterback on Tennessee’s 1998 national championship team and is back at his alma mater trying to help the Volunteers become competitive again in the Southeastern Conference. (AP Photo/Mark Humphrey, File) 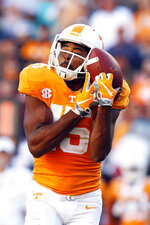 KNOXVILLE, Tenn. (AP) — Tennessee's wide receivers savor the opportunity to play for their new position coach because they appreciate what Tee Martin accomplished during his own playing career.

Martin was the starting quarterback on Tennessee's 1998 national championship team and is back at his alma mater coaching wideouts as the Volunteers attempt to become competitive again in the Southeastern Conference.

"He's been where we want to get," senior Brandon Johnson said. "I get to look at the man who did that every day. We can look at him and just kind of follow his mold, and we know he's not lying because he's done it before."

Martin remains an enormously popular figure at Tennessee, where he has a street on campus named in his honor. He began coaching soon after his professional playing career ended in 2005 but never quite expected this opportunity.

Tennessee offered Martin a soft landing after he was fired as Southern California's offensive coordinator at the end of the 2018 season. During his coaching career, he has worked with eventual NFL receivers JuJu Smith-Schuster, Nelson Agholor, Marqise Lee, Robert Woods and Randall Cobb.

He now takes over perhaps the most experienced position group of Tennessee's roster. Those receivers must produce more explosive plays for Tennessee to bounce back from two straight losing seasons in which the Vols have ranked last in the Southeastern Conference in yards per game.

For many of them, this year represents their last chance to make the type of impact they expected to deliver upon their arrival. Seniors on the receiving corps include Marquez Callaway, Jauan Jennings, Tyler Byrd and Johnson.

"I try not to think about that, but obviously I know this is my last camp," Callaway said. "This is it for me at the college level. I'm just trying to take it all in and try to go out every day so I won't have any regrets."

Callaway is Tennessee's top returning receiver and has prompted Martin to note that "has a skill set very similar to" Smith-Schuster, a former All-America receiver at USC who earned a Pro Bowl invitation with the Pittsburgh Steelers last season.

"I think he has the potential to be one of the best receivers in the SEC," Martin said. "I'm not just saying that because he's here at Tennessee. His body of work to this point speaks for itself. If he just continues to take his game to the next level, I think he could be one of those early round guys."

Martin also praised the way juniors Jordan Murphy and Josh Palmer performed in the spring and noted how Jennings has matured.

Tennessee would love to see Jennings regain the form he showed in 2016, when he became a fan favorite after producing a go-ahead touchdown catch against Florida and a Hail Mary reception to beat Georgia in consecutive weeks. Jennings has dealt with injuries the last two years and underwent knee surgery in the offseason, but the fifth-year senior says he's doing fine now.

"The knee's feeling better and I'm just ready for the season," Jennings said.

Tennessee didn't have anyone who caught more than three touchdown passes or accumulated as many as 600 yards receiving last season, but the receivers expect bigger things this year.

They should benefit from playing alongside an experienced quarterback in Jarrett Guarantano, who has started 18 games over the last two seasons. That type of stability is a welcome sign for a group that is playing for its fourth receivers coach in as many seasons.

Tennessee's receivers love playing for Martin and say they can't help but think about what he accomplished here as a quarterback. They want to make sure Martin experiences the same type of success here as an assistant coach.

"We've been working day in and day out, off the field and on the field, making sure we've been catching extra balls after practice," Jennings said. "We're definitely ready."