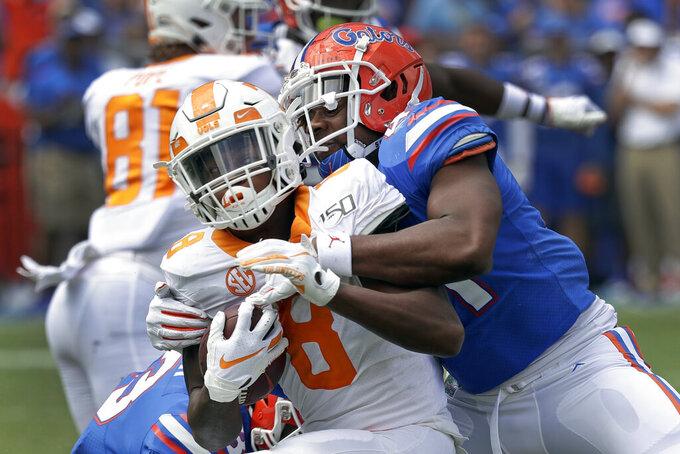 Tennessee running back Ty Chandler, left, is stopped by Florida linebacker James Houston IV after a short gain during the second half of an NCAA college football game, Saturday, Sept. 21, 2019, in Gainesville, Fla. (AP Photo/John Raoux) 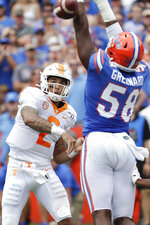 KNOXVILLE, Tenn. (AP) — Tennessee coach Jeremy Pruitt insists his team is far ahead of where it was a year ago.

Tennessee is spending its off week attempting to regroup from its first 1-3 start since 2008, with its lone victory coming over Football Championship Subdivision program Chattanooga. Tennessee must figure things out soon, as the Vols host No. 3 Georgia and Mississippi State and visit No. 2 Alabama in their next three games.

"Our football team is 100 times better than it was this time last year," Pruitt said. "Our guys are working hard. We are stronger and more physical. But when it comes to success on winning the football game, you can't turn the ball over and you have to create turnovers, and that is something that has hampered us in our three losses."

Plenty of other issues also are hindering Tennessee.

The defense couldn't control the line of scrimmage in a 38-30 loss to 26-point underdog Georgia State, couldn't protect a late lead in a 29-26 overtime loss to BYU and couldn't slow down a quarterback making his first career start in a 34-3 loss to Kyle Trask and No. 9 Florida.

"Everybody else is doom and gloom, but inside the program, everybody's played in big games," tight end Austin Pope said. "We've had guys who've had good experience against good football teams and we have guys who know they can play. I don't think the confidence level is an issue whatsoever."

Tennessee has numerous issues to address during its off week. High on the list is the quarterback position.

After throwing just three interceptions last season, Jarrett Guarantano already has been picked off four times this year. He was briefly benched against Florida last week before returning late in the game

Pruitt spent much of August and September emphasizing that Guarantano was his best quarterback but has struck a different tone over the last few days Pruitt says each of his three scholarship quarterbacks - Guarantano, freshman Brian Maurer and redshirt freshman J.T. Shrout - are getting equal reps during the off week.

"It's just like every position," Pruitt said. "Every position on our team, there's been times this year that we've played really good football, but we're looking for consistency, and that's with every position. Every week we play the guys that give us the best opportunity to have success, and we'll continue to do that."

Tennessee's struggles are somewhat surprising because the Vols showed promise for most of Pruitt's debut season last year. They got off to a 5-5 start under Pruitt that included victories over Auburn and Kentucky when both were ranked.

Since then, Tennessee has lost its last five games with Football Bowl Subdivision opponents by an average margin of 20 points.

"It's a season of hardships, but at the end of the day it's life," offensive guard Trey Smith said. "Life's going to hit you hard. You've got to get back up."

The former five-star recruit missed the final five games of the 2018 season after blood clots were found in his lungs, putting his career in jeopardy. Smith never lost hope he would play again and has appeared in each of Tennessee's first four games, becoming one bright spot in the Vols' dreadful start.

Now he is trying to help lead Tennessee back to respectability. Tennessee's players say they're not far from becoming competitive again, no matter what the results may indicate.

"We're building something," outside linebacker Quavaris Crouch said. "It takes time to build stuff. The world wasn't built in one day, either. Everything takes time."