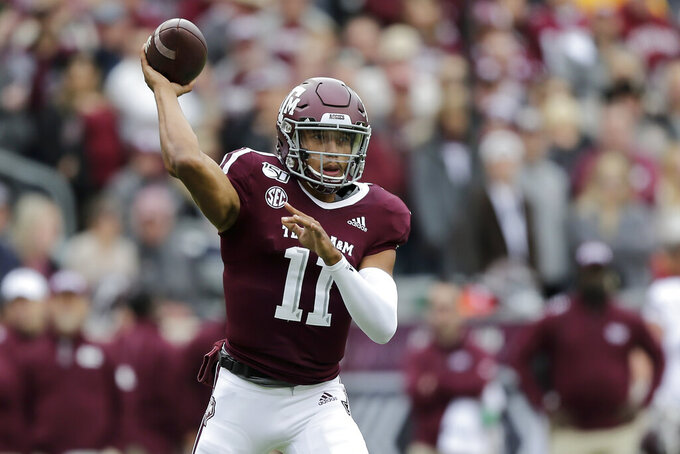 Texas A&M is looking to take another step forward Saturday against UTSA after playing perhaps its most complete game of the season last week in a win over Mississippi State.

Coach Jimbo Fisher said there is no way his team will take UTSA lightly as the Aggies try to improve before returning to Southeastern Conference play Nov. 16 after an off week next Saturday.

"It's not about who you play," Fisher said. "I don't care if it's Alabama, I don't care if it's UTSA. It's how you play, and how you prepare, and the things I go back to. You say I sound like a broken record. Yes, I am. Because that's what has success. The game rewards that. You got to keep doing it, practice well to play well."

Kellen Mond, who has had an up-and-down season, threw for 234 yards and accounted for five touchdowns in the 49-30 win over the Bulldogs. Fisher was impressed with the way his quarterback controlled the game.

"He trusted his eyes," Fisher said. "He took what the game gave him. Made great decisions. Was accurate with the ball. Distributed the ball. Wasn't selfish ... just made the right decisions. All of a sudden, we're really excelled. And we played well around him."

Mond's three touchdown passes tied a season high and he didn't throw an interception after being picked off twice in a win over Mississippi two weeks ago.

He'll get a chance to build on that solid game against the Roadrunners, who play in Conference USA and are coming off a 31-27 win over Rice. Fisher believes dealing with their defense will be a good test for his offense because the unit does a lot of different things.

"Constant blitzing team, exchanging fronts, bringing pressures all kind of times," Fisher said. "Different looks up front. You have to be on the same page offensively with the different formations ... they present a lot of problems defensively with their blitz schemes, different fronts, stemming and moving. They really do. As much as anybody we've played."

UTSA coach Frank Wilson knows no one is giving his team much of a chance to win this week as 38 1/2 point underdogs. That's just fine with him and he says that means there's absolutely no pressure on the Roadrunners.

"We don't have anything to lose," he said. "We're going to play, man. We're going to go play. Let our hair down and play to the best of our ability against an opponent that is certainly worthy."

Wilson and Fisher have known each other since Fisher worked at Samford in the late 1980s. And Fisher and Wilson really built a relationship when he was an assistant at LSU from 2000-06 while Wilson was coaching high school football in Louisiana.

"He is a great guy and a great football coach," Fisher said. "I knew him back when he started high school, he built O. Perry Walker down in New Orleans ... we got a lot of great players off those teams when I was at LSU."

Wilson said he didn't know exactly how much UTSA will receive for traveling to play Texas A&M on Saturday. But he knows the windfall for lining up against an SEC team will be substantial.

"It does so much for our program in its entirety," he said. "From how we travel to our facilities, equipment, resources for our kids in the things that are so critical for them to have success. Not quite sure what it is but thankful that we are able to be compensated to go play the game that we love."

The Aggies have gotten important contributions from a variety of freshmen this year. More than halfway through the season, with a lot of playing time under their belts, does Fisher still treat them like freshmen?

"I never have stopped coaching them like freshmen," he said. "I joke about that. I don't because I tell them, listen, if you're going to play, you're responsible for playing well."

A win on Saturday would make the Aggies bowl eligible for the 11th straight season.