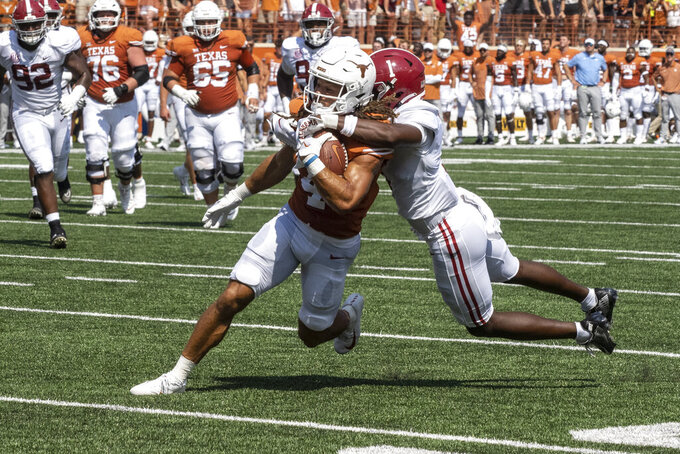 Texas receiver Jordan Whittington, runs after a catch while defended by Alabama defensive back Kool-Aid McKinstry during the first half an NCAA college football game, Saturday, Sept. 10, 2022, in Austin, Texas. (AP Photo/Michael Thomas)

AUSTIN, Texas (AP) — Texas was staring down the seconds of a potential program-changing win against Alabama.

The Longhorns nearly had it. Instead, a raucous, record crowd that so desperately tried to push the Longhorns to victory left with a 20-19 loss.

But it inspired some hope that Texas may be on its way back.

“We didn't lose today,” Texas coach Steve Sarkisian said he told his players, “We ran out of time.”

The game clock does count, and the final 0:00 left yet another round of “what if?” for Texas when it comes to beating the Crimson Tide. Texas certainly had its chances, but a first-quarter injury to quarterback Quinn Ewers stalled the offense and a defense that hounded Heisman-winning quarterback Bryce Young throughout the second and third quarters finally cracked in the fourth.

The game between future Southeastern Conference opponents was loud, wild and unpredictable until Young took over the final period by driving the Crimson Tide to a touchdown and the game-winning field goal.

“Texas has a lot better team than people give them credit for. If they were in the (Southeastern Conference) right now, they’d probably be in the top half of the league,” Alabama coach Nick Saban said after the game.

Since Alabama and Texas played for the 2009 season national title, Alabama has won six national championships and Texas hasn't won a Big 12 championship since that year. The Longhorns also have had five losing seasons and fired three head coaches in that stretch.

Still, Sarkisian and some of his players said the close loss sends a message that the Longhorns are coming up.

Texas running back Bijan Robinson, who had little room to run Saturday but scored Texas' only touchdown, said going toe-to-toe with Alabama showed Texas is tougher than expected.

“We’re ready to go against anybody, but I think what the country saw was Texas, they have a different culture, a new brotherhood," Robinson said.

Texas has tools to challenge anyone it plays. Robinson may be as dynamic as any player in the country and the same goes for wide receiver Xavier Worthy, who was tearing up the Alabama secondary under Ewers got hurt.

The Texas defense played perhaps its best game in years behind a plan that often had Alabama looking confused, with solid tackling and a physical effort at the line of scrimmage that Texas has lacked in recent years.

Sarkisian likes what he's building in the Texas roster that started two freshmen and sophomores on the offensive and a freshman quarterback.

“We're coming,” Sarkisian said. "Sometimes young is good. We don't have some of the battle scars that can affect your performance moving forward.

“We've got a bunch of hungry guys,” he added.