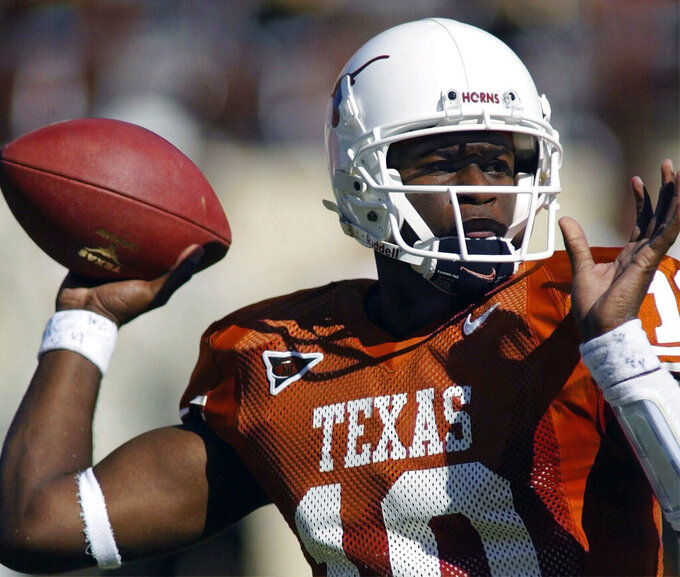 FILE - In this Oct. 16, 2004, file photo, Texas NCAA college football quarterback Vince Young looks for a receiver during the first half against Missouri, in Austin, Texas. Texas has fired former star quarterback Vince Young from his part-time role as a development officer for poor performance and often being absent from work or not in touch with his supervisors. (AP Photo/Harry Cabluck, File) 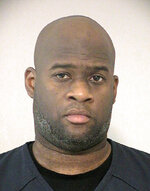 AUSTIN, Texas (AP) — Former Texas quarterback Vince Young, whose last-minute touchdown against Southern California in the 2006 Rose Bowl delivered the Longhorns' only undisputed national championship in the last 50 years, has been fired by the school from his part-time job as a development officer for poor performance and often being absent from work or not in touch with his supervisors.

The move comes after job warnings dating to 2017 and a second drunken driving arrest within three years on Feb. 4. After initially accepting responsibility for the drunken driving incident, Young has said he will fight the charge.

Young was notified March 1 he'd been fired from the $50,000 job "for not demonstrating significant and sustained improvement in the performance of your job responsibilities and failing to maintain standards of conduct suitable and acceptable to the university," the letter said.

The Associated Press obtained a copy of the letter and Young's personnel file through an open records request. Young declined to comment Saturday. A Texas spokesman said the school would not comment on a personnel matter.

Firing Young is a remarkable step by Texas, which has kept several other prominent athletes and coaches close to the school as ambassadors, athletic department advisers and fundraisers long after their careers on the field ended.

None has been bigger than Young, and none delivered greater success or a more iconic moment on the playing field: His scrambling touchdown on 4th-and-5 against the Trojans won a game considered among the greatest in college football history.

After turning pro and signing a $25 million NFL contract, Young was out of the league by 2014 and filed for bankruptcy. Texas gave him a lifeline with a full-time, $100,000 job as a development officer in the school's Division of Diversity and Community engagement. The job later became part-time.

Young's personnel file includes several good annual performance reviews. In March 2018, his supervisor wrote Young was "incredible in front of a crowd" and said, "We are so glad you are part of the NLP team."

But Young already had been put on a work improvement plan in July 2017 in which he agreed to show up for work during normal business hours and do a better job of accounting for his time out of the office. He requested his office hours be cut or be moved to part-time "because I work better out in the streets."

In September 2017, Young was given a strongly-worded "Unacceptable Performance and Conduct" reprimand and put on notice he could be terminated. He was cited for often being missing from work, skipping meetings with supervisors with no explanation and missing several weeks or months' worth of timesheets and employee calendar updates to account for his whereabouts. The timesheets were eventually submitted by an acquaintance not affiliated with the university.

Eleven days after his drunken driving arrest, Young was notified on Feb. 15 his firing was imminent unless he could demonstrate a reason not to.

According to a letter from Patrick Patterson, assistant vice president for the Longhorn Center for School Partnerships within the Division of Diversity and Community Engagement, Young didn't tell his supervisors about his arrest until after it was reported in the media and only then by text.

When the men spoke the next day, Young said he intended to resign immediately but didn't. He then requested medical leave but didn't qualify because he hadn't worked enough hours the previous year.

"Due to both your past disciplinary history and recent events," Young would be fired, Patterson wrote. Young would be allowed to use up to 12 weeks accrued time off to stay on until May if he provided documentation from a health care provider that he was under medical care. According to his termination letter, Young never filed that paperwork and he was fired.

In a response letter to Patterson, Young said he wanted to stay on, arguing he'd developed valuable donor relationships for the school and had been a good ambassador for the outreach program. He also said he's tried to stay sober since his first drunken driving arrest in 2016.

"I have shown good faith toward my actions and gone beyond to maintain a level of sobriety wellbeing," Young wrote. "Unfortunately, with walking a straight and narrow path, incidents occur out of one's control."

By Paul Newberry 9 minutes ago
27 minutes ago
By Steve Megargee an hour ago
2 hrs ago
By Ralph D. Russo 2 hrs ago