Texas looks to continue resurgence vs Georgia in Sugar Bowl 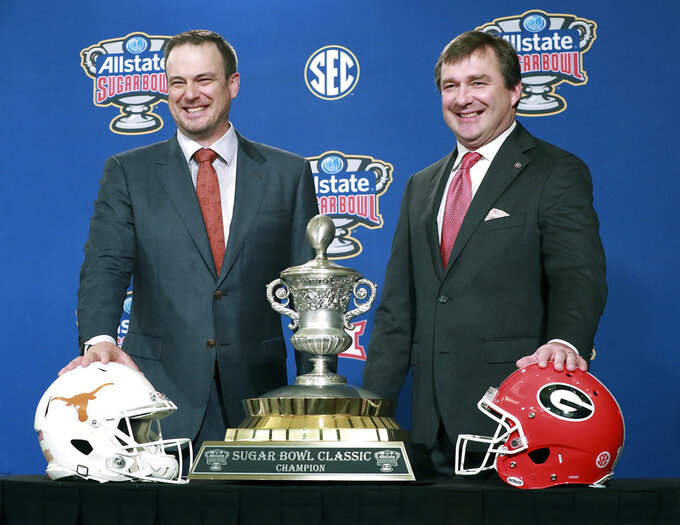 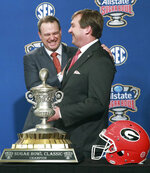 NEW ORLEANS (AP) — Texas coach Tom Herman has needed less than two years to pull the football program out of mediocrity and get to a prestigious bowl game on New Year's Day.

The 14th-ranked Longhorns will face No. 6 Georgia in the Sugar Bowl on Tuesday night looking to continue their resurgence on the national landscape. Herman hopes his team is ready to take advantage of the opportunity.

"This is another very important step," Herman said. "Winning it would certainly be even bigger."

Georgia has already established itself as one of the nation's best programs. The Bulldogs were in the hunt for a spot in the College Football Playoff all season before a close loss to Alabama in the Southeastern Conference championship game knocked them out of the four-team field.

Georgia coach Kirby Smart has acknowledged the disappointment of that loss. But he's also adamant the Sugar Bowl is an opportunity his program won't take for granted.

"The comeback is what you do this for," Smart said. "So this is our opportunity to go out and finish it and do it the right way, and we want to do that."

Texas will be the underdog for Tuesday's game after losing to Oklahoma in the Big 12 championship game . But the Longhorns are confident — and motivated — to prove that their quick rise isn't a mirage.

"For the first time in a long time I think we understand that our best is good enough," Herman said. "That if we play our best, we can play with and/or beat any team in the country."

Here are a few other things to know then Georgia faces Texas in the Sugar Bowl:

Georgia quarterback Jake Fromm had one of his best games in the SEC championship game, throwing for a season-high 301 yards and three touchdowns. He also completed a season-high 25 passes.

Even so, Fromm says the Bulldogs' success has to begin on the ground against Texas.

THE HOME OF BREES

Now Ehlinger gets a chance to compete on the same field where Brees has become a legend.

"I have pride in the fact that I went to his high school and to be able to play in the Superdome where he has absolutely gone off and set records and done those things for the Saints organization — it is really cool," Ehlinger said.

Herman had high praise for his senior class, which came to Texas when the program was in the midst of three straight losing seasons. Now they'll go out with one final game in the Sugar Bowl.

"Although they may not have the championships or the hardware to prove it, they will go down as maybe the most influential senior class at least hopefully in my tenure for having gotten us through some rocky times and never wavering, staying committed to the things that they believe in and the things that we believe in," Herman said.

Georgia lost its defensive coordinator earlier this month when Mel Tucker left to become the head coach at Colorado. Smart said Tucker's responsibilities wouldn't be shouldered by just one coach.

"We do it by committee most of the time anyway," Smart said. "Mel called the defenses for us. But between series, during the week game planning, it was done by committee because that's how you put a game plan together.

The Longhorns will have a tough task on Tuesday when they attempt to slow Georgia's running game, which has been very productive with D'Andre Swift and Elijah Holyfield, who have combined to run for nearly 2,000 yards this season.

Herman compared Georgia's production to rival Oklahoma, even if the two teams' schemes are very different.

"The one thing those two teams have in common are massive offensive linemen and really, really talented tailbacks, which usually equates to a pretty good run game," Herman said.