Texas-Oklahoma soon to be part of "SEC! SEC!" 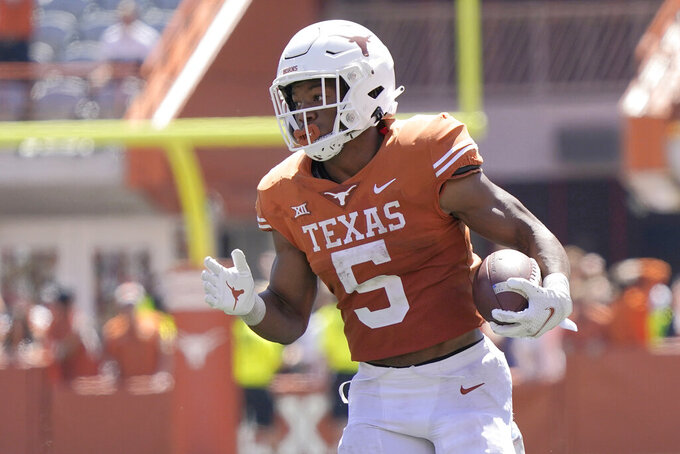 Texas running back Bijan Robinson (5) runs for a touchdown against Texas Tech during the second half of an NCAA college football game on Saturday, Sept. 25, 2021, in Austin, Texas. (AP Photo/Chuck Burton) 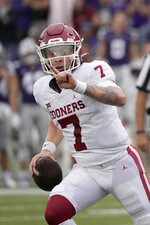 AUSTIN, Texas (AP) — To get a glimpse of the Southeastern Conference's plan to dominate college football Saturdays, take a look at this weekend's schedule.

In Dallas, No. 6 Oklahoma and No. 21 Texas play their annual matchup amid the revelry of the State Fair of Texas in late morning. No. 1 Alabama visits Texas A&M at sunset. In between, No. 2 Georgia plays No. 18 Auburn in the latest edition of what's billed as the Deep South's oldest rivalry.

Soon, all those games will be SEC matchups once Texas and Oklahoma join the league. Newly stocked with Sooners and Longhorns, the 16-team SEC will more than any other conference have the ability to put on marquee events from noon to midnight.

The national reach of Texas and Oklahoma should give the SEC and its broadcast partners even more power and influence over the sport, expanding the geographic footprint while teams drill even deeper into the Lone Star State's fertile recruiting grounds.

When it happens — set now for 2025, the year after the SEC starts an 10-year broadcast rights deal with the ESPN and ABC after three decades with CBS — the Red River showdown will be tucked into a league schedule already full of blood rivalries like Georgia-Florida, Auburn-Alabama and even the eventual return of Texas-Texas A&M.

Adding Texas and Oklahoma “is going to result in (the SEC) having more top-10 ranked teams vs. top-10 team ranked teams," said Karl Benson, a former commissioner of the Mid-American Conference, the Western Athletic Conference, the Mountain West and Sun Belt.

“That little saying, ‘It means more.’ I didn’t realize just how much that meant until I lived in the SEC territory, in the SEC footprint,” Benson said.

The SEC's current broadcast deal with CBS pays about $55 million to the league annually. The SEC and ESPN are already in the middle of a 20-year deal that includes a partnership on the SEC Network, but the new ESPN deal will pay the league $300 million annually for the rights to broadcast the midday game of the week on ABC.

Plus, the network will now be able to show SEC games on Saturday nights on ABC, a slot that is typically one of the most viewed of a college football weekend.

Measuring exposure is inexact, but television viewers and online search data offer a lens into how a conference can dominate a football Saturday.

Last weekend was the SEC’s first big slate of conference games, with No. 1 Alabama and No. 2 Georgia both playing ranked conference rivals. ESPN had an SEC triple-header all involving at least one ranked team, with Alabama-Mississippi on CBS in the afternoon.

The SEC drew four of the seven largest television audiences on Saturday, with two Big Ten games and Cincinnati-Notre Dame filling out the rest.

The Big Ten managed to outdraw the SEC online, snapping a three-week streak of the SEC being the most searched conference on Saturday, according to a Google Trends search.

As the SEC increases in size and power, they will have more eyeballs than ever on their conference every Saturday — and that can "be very impactful,” said Matt Balanz senior vice president of analytics for Navigate Research, a company that does data projections for college conferences and professional leagues.

"For example, when the SEC has a larger share of TV viewers today with its existing smaller conference, they see 50-75% more online search traffic than the rest of the (Power Five) conferences, which can lead to all kinds of important consumer behaviors, such as buying tickets and merchandise, donating and applying to the school," Balanz said.

Dave Brown, a former ESPN vice president of programming, is now a consultant for schools and leagues for future schedules. The Red River rivalry is a game “anyone would want to have” and builds on the SEC's arsenal of must-see rivalry games.

But records and rankings in the moment still count, Brown said.

He called the Big Ten matchup of No. 3 Iowa vs No. 4 Penn State the top gamethis week, with Georgia-Auburn on equal footing with Texas-Oklahoma. Texas A&M losing its last two games deflated the national interest in what what looked like a tasty sunset showdown with Alabama.

While Texas-Oklahoma is a Top 25 matchup this year, there was also three-year stretch of losing seasons by Texas from 2014-2016.

“If they just don’t have the records and the rankings, you’re just not going to get the ratings,” Brown said.

“There's plenty of good teams around” Neinas said. “The Big Ten in particular. They're in a lot of markets."

Neinas did say the SEC has probably done the best job of any conference in taking a regional product and making it a national one. Benson noted he sees signs of SEC fans popping up in Colorado, where he lives.

“I don’t remember it being this way earlier, but the number of Alabama fans and Alabama stickers and car stickers and banners and licenses plates that I see in Denver ... it's a phenomenon," Benson said.