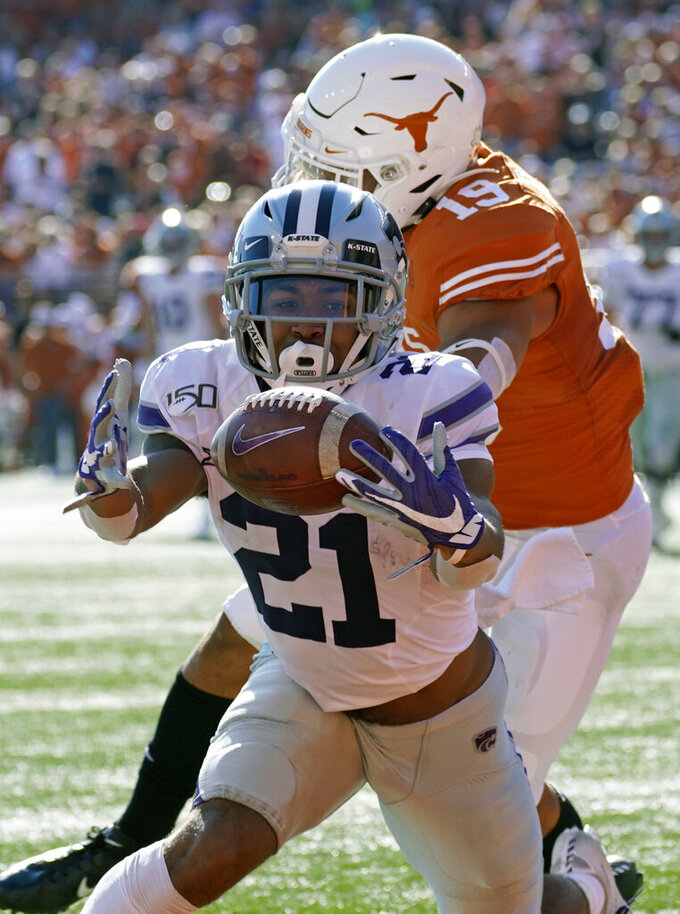 Kansas State's Wykeen Gill (21) hauls in a pass for a touchdown in front of Texas's Brandon Jones (19) during the first half of an NCAA college football game in Austin, Texas, Saturday, Nov. 9, 2019. (AP Photo/Chuck Burton)

Green leveled Gill with a helmet-to-helmet hit near the Kansas State sideline in the fourth quarter of Texas’ 27-24 victory. Gill was knocked out of the game and Green was ejected.

No penalty flag was thrown but Gill stayed down and officials reviewed the play before ejecting Green for targeting. Green will have to miss the first half of No. 22 Texas’ game this week at Iowa State.

Kansas State coach Chris Klieman said that Gill may not play for the Wildcats this week against West Virginia, and he didn’t think it was fair that Green would only miss one half of a game.

“First and foremost, I want to apologize to Wykeen Gill and Kansas State for the hit and targeting penalty that I received during Saturday’s game. I did not try to hurt him, and I would never do that. It’s not how we’re coached or how I play,” Green said in a statement released by Texas.

The contact came well away from the play on the field. Wildcats quarterback Skylar Thompson handed the ball to running back Jordan Brown who ran into the middle of the line for no gain.

Green said he was trying to break up a screen play that had worked several times against Texas. Gill had caught a screen for 13 yards five play earlier but was nowhere near the ball when Green hit him.

“I realize how it may have looked, and I understand the penalty that was called,” Green said. “I wish it didn’t happen, and I do want everyone to know I was not trying to take a cheap shot.”