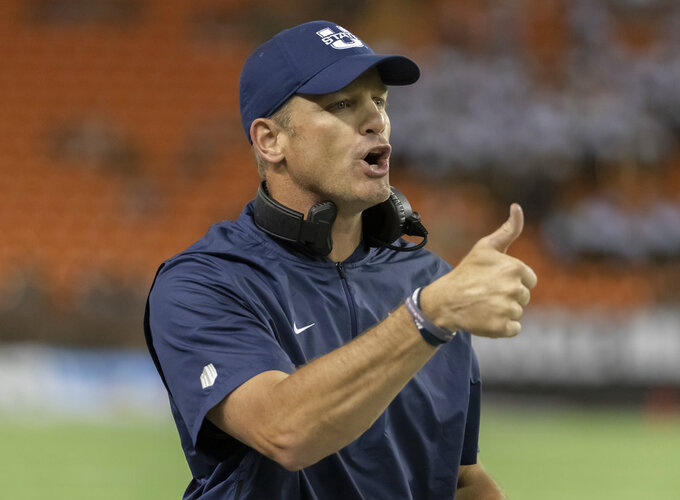 FILE - In this Nov. 3, 2018, file photo, Utah State coach Matt Wells gestures to officials during the first half of the team's NCAA college football game against Hawaii in Honolulu. Texas Tech has hired Wells as its new football coach after he was part of an impressive turnaround at Utah State, his alma mater. The hiring was announced by Texas Tech on Thursday night, Nov. 29. (AP Photo/Eugene Tanner, File)

LUBBOCK, Texas (AP) — Texas Tech hired Matt Wells as its new football coach Thursday night after he was part of an impressive turnaround at Utah State, his alma mater.

Wells had a 44-34 record in six seasons as coach of the Aggies, who are 10-2 this year and headed to their fifth bowl in that span. He was an assistant at Utah State the previous two years, going to bowls both times, including a school-record 11 wins in 2012 when he was offensive coordinator.

"Quickly in the interview process, it became clear Matt Wells and his leadership style were a perfect fit to lead our football program," athletic director Kirby Hocutt said. "We have a great future in store under Coach Wells, and I firmly believe he is the right coach to take us to an elite level."

The 45-year-old Wells replaces Kliff Kingsbury, the former Texas Tech quarterback who was fired after his third consecutive losing season and a 35-40 overall record in six seasons as head coach.

The Red Raiders were 5-7 this year, losing their finale 35-24 to Baylor last Saturday with a chance to become bowl eligible.

"My family and I are excited to join the Red Raider family," Wells said. "I am excited to meet the team and get to work on building an elite program that Red Raider fans will enjoy every Saturday."

For Texas Tech fans used to big-scoring offenses, the Aggies this season are third nationally with 47.2 points a game to trail only Oklahoma and Alabama. They have an NCAA-best 24 scoring drives of under a minute.

Utah State also is solid on defense, allowing only 23 points a game. The Aggies have allowed at least 30 points only three times, including their losses to then-No. 11 Michigan State in the season opener and 33-24 at then-No. 21 Boise State last week in a game for a spot in the Mountain West Conference championship game. That ended the Aggies' 10-game winning streak.

The Aggies have an NCAA-best 18 interceptions, six of them returned for touchdowns. They have also recovered 10 fumbles, and their plus-11 turnover margin is among the best in the country.

Earlier this week, Wells was voted Mountain West Conference coach of the year for the second time.