Texas Tech looking for even more offensive tempo vs UTEP 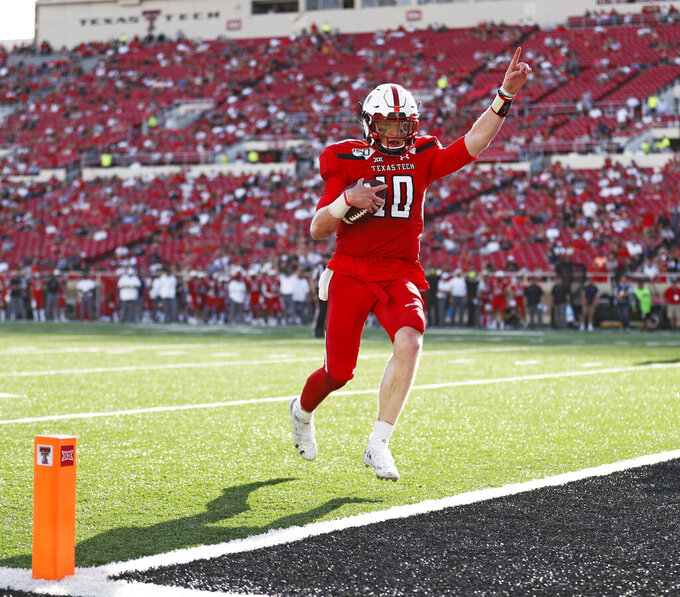 Texas Tech's Alan Bowman (10) scores a touchdown against Montana State during the second half of an NCAA college football game Saturday, Aug. 31, 2019, in Lubbock, Texas. (Brad Tollefson/Lubbock Avalanche-Journal via AP)

LUBBOCK, Texas (AP) — Texas Tech feels like it can pick up the pace even more in its up-tempo offense.

"We can definitely go faster," running back Armand Shyne said.

The goal for the Red Raiders with new offensive coordinator David Yost, who came with head coach Matt Wells from Utah State, is to get lined up and snap the ball with at least 30 seconds left on the play clock. Yost said they averaged about two seconds longer than that in their season opener.

"We get lined up and go as fast as we possibly can," sophomore quarterback Alan Bowman said.

In a season-opening 45-10 win over FCS team Montana State, the Red Raiders ran 95 plays and had 691 total yards. They are home again Saturday to play UTEP (1-0).

"It is as fast as we've gone up against," said Dana Dimel, the second-year UTEP coach who was a Kansas State assistant the nine seasons before that. "Their offensive linemen are sprinting up to the line of scrimmage and then running the next play. ... We have seen this tempo and been around it for a while. It is a really difficult challenge."

Bowman completed 40 of 55 passes for national-best 436 yards with two touchdowns in the opener.

The Red Raiders' 255 yards rushing were their most in a season opener since 2000. Shyne, a transfer from Utah who Wells had recruited when at Utah State, had a 69-yard touchdown run while rushing 11 times for 125 yards. Ta'Zhawn Henry added 55 yards while freshman SaRodorick Thompson ran for two scores.

"In terms of where we're at with the running back situation, it will be a three-headed muscle for quite a while," Wells said. "They are all capable of playing at Texas Tech in our offense. I also believe that the reps that will be distributed amongst all three of them will be cumulative in nature and help them stay a little fresher, and a little healthier, as the season goes on."

Texas Tech's defense also got off to a solid start for new coordinator Keith Patterson, even without forcing a turnover. Montana State had only 289 total yards, and went three-and-out on all four of its possessions in the first quarter. The Bobcats had eight 3-and-outs and were only 2 of 16 on third-down conversions. Wells said the Bobcats "had absolutely no chance to score" on 10 of its 15 possessions.

"That will be the kind of production we need every single week to be able to play great defense, change the culture around here on defense," Wells said.

7 IN A ROW OVER LONG TIME

Texas Tech has won its last seven meetings against UTEP, with those wins stretched over more than a half-century. With their campuses about 350 miles apart, they are playing for the first time since 2015 — and only the 24th meeting in a series that dates to 1930. Tech's winning streak, the longest by either team in the series, started with a win at El Paso in 1963.

Bowman, a true sophomore, has eight career starts for the Red Raiders. He has passed for at least 400 yards in three of those games, and went over 300 yards in two others. The only three starts when he didn't throw for at least 300 yards were games he departed early due to injury or a big Tech lead.

Texas Tech is 42-2 in non-conference home games since 2000. ... UTEP's had 508 total yards, its most since 2016, in a season-opening 36-34 win over Houston Baptist. That was also the Miners' first win at home in the Sun Bowl since 2016. ... The Red Raiders are progressing up to their Big 12 schedule. After the opener against an FCS team, and playing UTEP from Conference USA, they will wrap non-conference play at Pac-12 team Arizona.