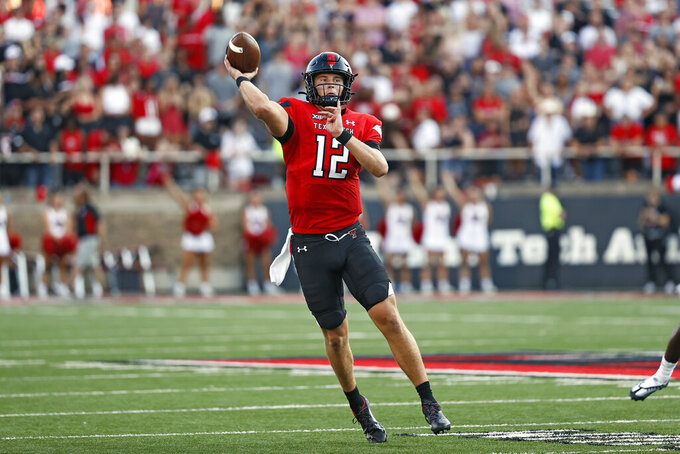 Red Raiders coach Joey McGuire said Monday that he expects Shough to be out three to six weeks. The quarterback, in his second year starting at Tech after three seasons at Oregon, has an examination scheduled for Wednesday, and surgery is a possibility.

“That’s where it could prolong to six weeks if it is,” first-year Tech coach McGuire said during his weekly news conference.

Shough missed the final eight games last season after breaking his left collarbone during the fourth game. He started Saturday night and injured that same shoulder in the first half of Tech's season-opening 63-10 win over Murray State.

McGuire said this injury is “not exactly” where it was last year, but was still related to the collarbone. Shough didn't have surgery after getting hurt last season.

Texas Tech's depth chart for Saturday's home game against No. 24 Houston lists Donovan Smith as the starting quarterback, ahead of Behren Morton. Shough was listed as third on the chart.

After Shough got hurt in the game against Murray State, Smith came off the bench to complete 14 of 16 passes for 221 yards and four touchdowns, with his first two passes going for scores. Shough was 6-of-10 passing or 154 yards and a TD.

The Red Raiders have consecutive nonconference games against ranked teams, first against Houston and then at 13th-ranked North Carolina State. Their Big 12 opener is Sept. 24 at home against Texas in the fourth game — the same opponent and same week Shough got hurt last season.