Texas Tech ready to get started with coach Wells in opener 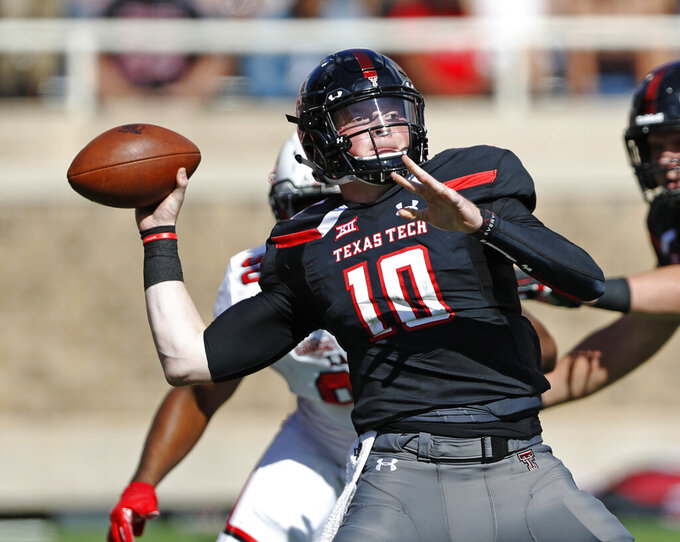 FILE - In this Sept. 8, 2018, file photo, Texas Tech's Alan Bowman throws a pass against Lamar during an NCAA college football game in Lubbock, Texas. Bowman was tearing it up as a freshman for the Red Raiders until a partially collapsed lung ultimately limited him to eight games. He passed for 2,638 and 17 touchdowns in those games and after he was gone so were the Red Raiders bowl chances. (Brad Tollefson/Lubbock Avalanche-Journal via AP, File)

LUBBOCK, Texas (AP) — Nine months after getting the call from Texas Tech, coach Matt Wells is ready to lead the Red Raiders onto the field for a game.

"There's a lot of excitement around the building," senior linebacker Jordyn Brooks said.

Wells replaced Kliff Kingsbury, the former Texas Tech quarterback who won his first seven games as coach in 2013 but went 28-40 after that. He was fired after a five-game losing streak that left the Red Raiders 5-7, their third consecutive losing season. Kingsbury is now head coach of the NFL's Arizona Cardinals after briefly being Southern Cal's offensive coordinator.

After 22 years in coaching, the past six as head coach with an impressive turnaround at his alma mater Utah State, Wells is a Power Five head coach for the first time. He brought offensive coordinator David Yost and defensive coordinator Keith Patterson with him from the Aggies, who were 12-2 last season after a 52-13 win in the New Mexico Bowl over North Texas.

Yost will also coach the Red Raiders quarterbacks, including sophomore starter Alan Bowman, who is fully healthy after being limited to eight games last season because of a deflated lung. Bowman completed 227 of 327 passes (69.4 percent) for 2,638 yards and 17 touchdowns as a true freshman, and has impressed his new coaches.

"Just his ability, I think continual buy-in in our program with me, with David Yost, and how that relates to his leadership with the rest of the players. I think he's taken a really a step in a positive way in terms of the leadership the last half of camp," Wells said. "The first step of leadership is production. ... He's been very consistent, he's made really good decisions in practice and I look for that to continue on Saturday."

ALL OVER THE PLACE

Andersen moved to quarterback from running back as a sophomore at Montana State last year, when his 1,412 yards rushing set a school record for a quarterback while the Bobcats went 8-5. The hard-nosed runner won't be the starting quarterback this season, but will instead play different spots on offense while also being a starting linebacker.

"We'll use Troy in the way that allows him to impact each game the most," coach Jeff Choate said. "That might be at fullback in two-back sets, it might be at running back, it might be at tight end or split out. And he's the ace up our sleeve as a quarterback."

Wells and his staff like to score a lot of points. They also like to put an emphasis on defense, an area where the Red Raiders have long struggled. The linebackers have flourished in the new system through spring and then preseason camp.

"The system allows the linebackers to really play free and make a lot of plays across the field," Brooks said. "And we have a lot of good linebackers. We got a lot of young guys, but they're catching on and it's really showing up right now."

Texas Tech has won its last 19 home openers, averaging 50 points a game and winning by an average margin of 31.1 points. The Red Raiders had won 15 season openers in a row overall before losing to Ole Miss last year at the home of the NFL's Houston Texans.

The Red Raiders have seven transfers who could make an impact this season. That includes four players that have two seasons of eligibility remaining.