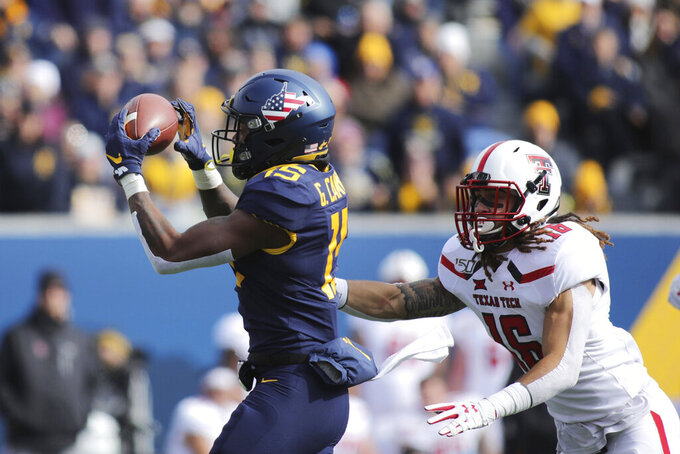 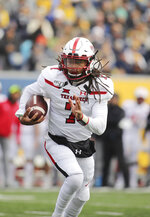 The junior moved the offense at will in the first half and the Red Raiders used a fast start to beat West Virginia 38-17 on Saturday, handing the Mountaineers their fifth straight loss.

Duffey threw for one touchdown to boost his total to 10 scores with two interceptions in his last five games after taking over in mid-September for the injured Alan Bowman.

"We came out with a great focus. We have to continue it," Jett said. "I always believe in myself, I always believe that if I work hard and do what I need to do, then I will achieve what I want to achieve, no matter what's in my way."

Ta'Zhawn Henry and SaRodorick Thompson each had two first-half short scoring runs for Texas Tech (4-5, 2-4 Big 12), which broke a three-game losing streak and now has a bowl bid to fight for with three games left.

"A lot of people are counting us out," said Texas Tech coach Matt Wells. "(We have) a little underdog mentality right now."

Texas Tech scored touchdowns on its first five drives and led 35-10 at halftime. Duffey accounted for 281 of Texas Tech's 337 first-half yards. He took advantage of a decimated secondary with four first-half passes of 20 yards or longer, including an 81-yard scoring toss to a wide-open Dalton Rigdon.

"He's really done a nice job of protecting the ball in the pocket better," Wells said.

"A frustrating day all the way around," said West Virginia coach Neal Brown. "We got off to an extremely poor start defensively. We didn't get pressure on the quarterback all day. He made a bunch of plays on us. He's active. He got the ball out of his hand fast."

A year ago, Duffey ran for 86 yards in a 42-34 loss to the Mountaineers in a game that West Virginia led by as many as 25 points.

West Virginia's Austin Kendall was intercepted twice, one of them into triple coverage that Texas Tech's DeMarcus Fields caught in the end zone in the third quarter. Kendall also fumbled the ball away on fourth down as he was hit attempting a first-quarter pass.

Kendall finished 26 of 43 for 355 yards before being replaced late in the third quarter by Bowling Green transfer Jarret Doege, who made his season debut. Kendall and Doege each threw a touchdown pass.

West Virginia's losing streak is its worst since losing five straight in 2012.

Texas Tech: The Red Raiders appeared at ease in their impressive first-half performance and can become bowl eligible with wins in two of their final three games, including two at home.

Texas Tech tight end Travis Koontz was ejected from the game for targeting for a third-quarter hit on safety Kerry Martin.

West Virginia has lost three home games for the first time since the 2014 season, when it finished 7-6. The home finale is Nov. 23 against Oklahoma State. The last time the Mountaineers lost four times at home was in 1990, when it finished with five home losses.