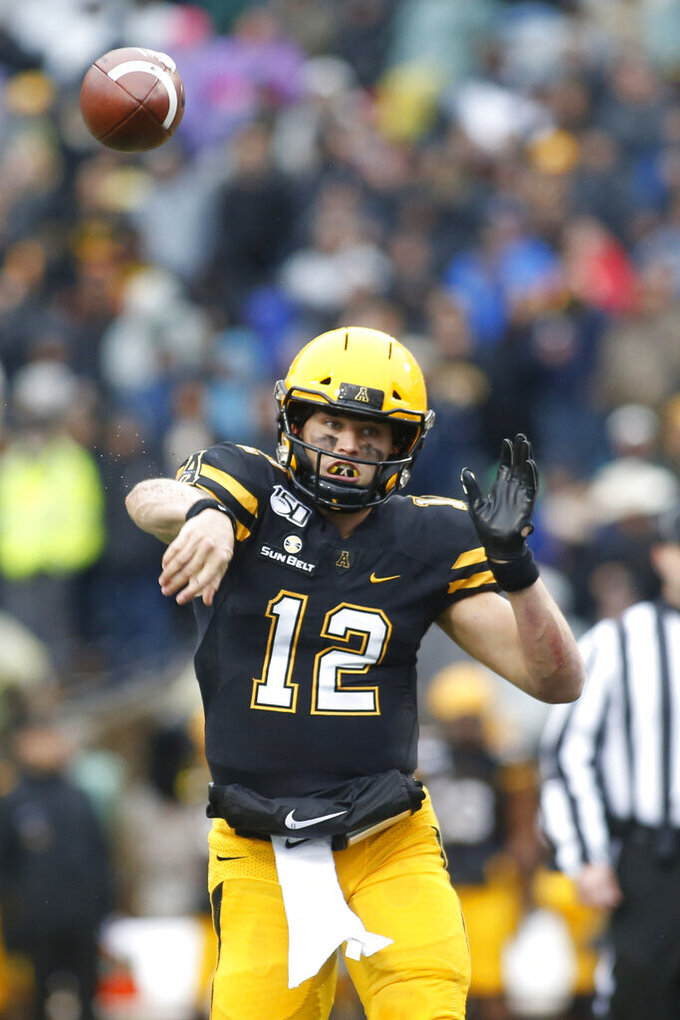 Boone, N.C. (AP) — Zac Thomas began to wonder if his dreams of playing college football ended when he broke the tibia and fibula in his leg midway through his senior season at Hewitt-Trussville High School in Alabama.

He had nearly a dozen FBS scholarship offers before the injury, but they were quickly rescinded when schools backed off and decided to move on to other recruits. It wasn't until after Thomas' senior season that Appalachian State re-entered the recruiting picture and decided to take a chance on him.

The move has paid off big time for Appalachian State.

The junior quarterback is 21-3 as a starter at App State and is in the midst of another big season, throwing for 2,427 yards and 24 touchdowns while rushing for 387 yards and seven scores. He accounted for five touchdowns last week against Troy, marking the second time in three weeks he's accomplished that feat.

“It took a toll on me," Thomas said of his injury in high school. "You're in high school and thinking you are going to play college football and then they take away your scholarships. It was eye-opening. It definitely sucks because it was what I had worked for and dreamed of doing for so long.”

Thomas said when he visited Appalachian State he knew it was a “perfect fit."

But it still took him longer than he expected to get his shot.

He was red-shirted as a freshman and then played in just four games the following year as the team's No. 2 QB.

But since being handed the reigns of the offense last year he's taken off. He was named the Sun Belt Conference Offensive Player of the Year in 2018, becoming one of just five college quarterbacks with 20-plus touchdowns passing and 10 or more TDs rushing in a season.

“The most important characteristic for a quarterback is toughness and you see that in Zac — both mental and physical,” said Mountaineers coach Eli Drinkwitz. “He runs physical when we ask him to do so and he isn't afraid to get the first down with his feet. And he's mentally tough and bounces back when things aren't going his way. He doesn't hang his head."

Some other things to watch between Lafayette and Appalachian State on Saturday:

Thomas called this a “statement game."

The Mountaineers, who entered the week as a 6-point favorite, may be ranked 20th but Thomas said he still feels like there are some around the country who don't feel like they belong in the conversation with the top teams in the country, perhaps because they play in the Sun Belt.

App State has a chance to become the first Sun Belt team to win 12 games in a season.

The Mountaineers beat the Ragin' Cajuns 17-7 earlier this season in a defensive struggle. Thomas accounted for both App State touchdowns in the game on the ground. Thomas called Lafayette the best defense he's faced all season.

“They have ballers all around the field,” Thomas said. “It's going to be a contest.”

“I think they’ve improved tremendously since the first time we played,” Drinkwitz said of Lafayette. “To assume that the game will be similar in nature to the one we played previously would be a false narrative going into the game. I think both teams have changed whether it’s due to injuries or whatever the season has brought about.”

One of those injuries is to Corey Sutton, one of App State's top offensive weapons. The junior wide receiver tore his ACL in the first half against Texas State two weeks ago. “You never get to replace a player the caliber of Corey Sutton,” Drinkwitz said. “But what you try to do is spread out the opportunities to the rest of the team, and see if other people can step up.”

If the game comes down to a field goal, Lafayette has a good one in Stevie Artigue. He has made 12 consecutive field goals, the longest streak in school history. He recently became the school's all-time leader in field goals made with 50.