Those other SEC teams scrambling for bowl eligibility 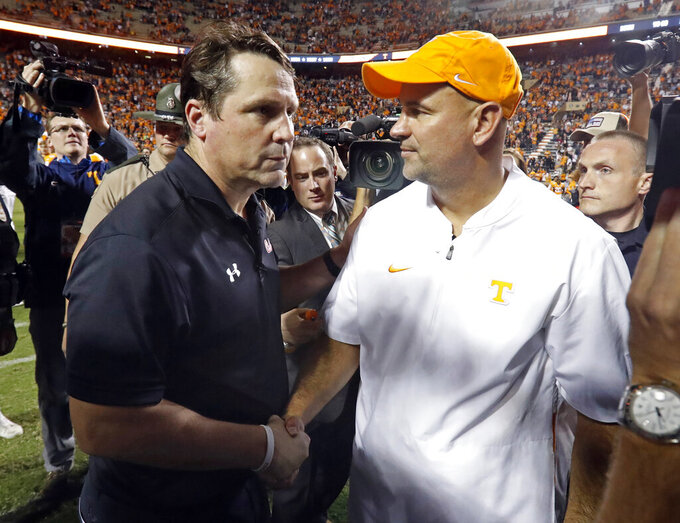 TUSCALOOSA, Ala. (AP) — While LSU, Alabama and Georgia are working on their playoff credentials, much of the Southeastern Conference has more humble goals.

Teams like South Carolina, Tennessee and Mississippi State are battling for bowl eligibility with 4-5 records. Ditto for Kentucky at 4-4. Missouri's fighting for that status on two fronts: The Tigers' record (5-3) and, more importantly, their appeal of an NCAA postseason ban for academic misconduct involving a former tutor.

Vanderbilt, Arkansas and Mississippi have little or no margin for error — but could get a boost from their Academic Progress Rate scores to get into the postseason if they make it to five wins.

The SEC has six teams who are already bowl eligible and four more spots to fill, not counting the College Football Playoffs.

Potential playoff berths and titles are at stake when No. 1 LSU (No. 2 College Football Playoff rankings) visits No. 2 Alabama (No. 3, CFP) on Saturday. If two SEC teams were to get into the playoffs, it would make it even more of an uphill climb for the league to fill those bowl slots — which include a New Year's Six game, with teams that have at least .500 records.

Of course, the SEC would gladly embrace that particular predicament. Georgia is No. 6 in both the CFP and Associated Press rankings.

Other SEC games might not be worthy of a presidential visit — President Donald Trump is expected to attend the game at Alabama. But they're meaningful games for the teams and their fans, including the Kentucky-Tennessee matchup Saturday night.

The stretch run could make a break a team's season.

South Carolina linebacker Ernest Jones said the Gamecocks don't have "the feeling of a team that's going to lay down because there's no hope of winning the (SEC) East. Now, we're playing for our seniors, playing for a bowl game. We're going to go down fighting."

If the SEC can't fill all its bowl slots with teams that are 6-6 or better, it can turn to a 5-7 team based on their APR scores. Vanderbilt is only 2-6 but leads the league in that category, ranking fifth nationally. Arkansas (2-7 and a huge longshot), is second in that group, followed by Ole Miss (3-6), Mississippi State, Missouri and Tennessee.

So schools could get rewarded for their off-the-field work even if their on-field record is subpar, like Mississippi State did in 2016.

Here's a look at the teams still trying to become bowl eligible:

— South Carolina still has work to do even with an upset of Georgia. The Gamecocks face once-ranked teams Appalachian State and Texas A&M and No. 4 Clemson.

"We have to go out right for the seniors," redshirt freshman quarterback Dakereon Joyner said. "I think that's the biggest thing the underclassmen are focusing on."

— Tennessee has shown signs of life after a horrid start , winning three of the last four games, with the only loss coming at Alabama in a game that was competitive well into the second half. The Volunteers are at Kentucky and Missouri before closing at home against Vanderbilt. All seem like winnable games, but coach Jeremy Pruitt says the Vols aren't looking ahead to their postseason chances.

"I don't have time to worry about that other stuff," Pruitt said. "I think it's kind of common sense, if we could get fifteen extra practices, that's got to help you, right?"

— Kentucky has dealt with quarterback issues since Terry Wilson went down with a season-ending knee injury in Game 2. The Wildcats host Tennessee, UT Martin and Louisville while visiting Vanderbilt — hardly the most daunting schedule.

— Mississippi State does have a huge challenge in hosting the Crimson Tide next weekend and also faces Abilene Christian and Ole Miss.

— The Egg Bowl could be about bowl eligibility for the Bulldogs and Rebels, especially if the SEC has room for a 5-7 Ole Miss team. Ole Miss hosts New Mexico State before facing LSU ahead of the in-state rivalry game.

— Vanderbilt and Arkansas, which is 0-6 in SEC games, face long odds even with the strong APR. The Razorbacks' closing stretch includes a visit to LSU. The Commodores, battling quarterback injuries, visit No. 10 Florida Saturday and would need to win out to reach .500.

Florida coach Dan Mullen was Mississippi State's coach for the 2016 team that went 5-7 before winning the St. Petersburg Bowl over Miami (Ohio).

"There was an opportunity and they earned that opportunity because of what our team had done in the classroom as student-athletes," Mullen said. "I thought that's a pretty good way to figure it out."