Tim Tebow struggling in Triple-A; still a work in progress 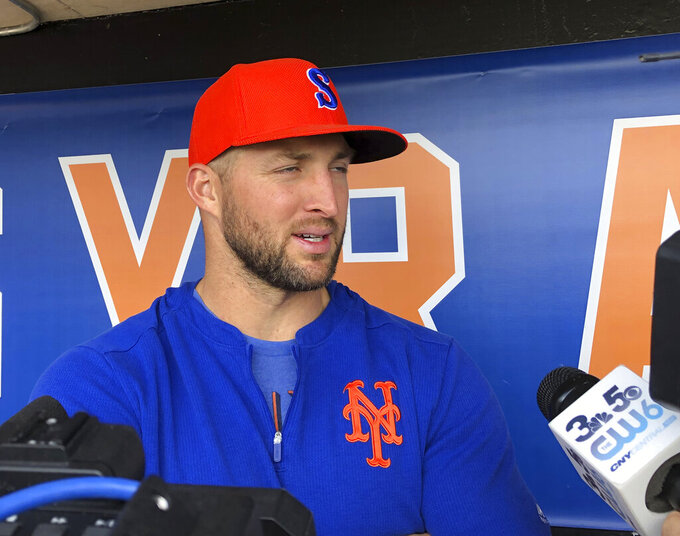 Syracuse Mets' Tim Tebow speaks with reporters prior to a minor league baseball game, Thursday, May 16, 2019 in Syracuse, N.Y. The former Heisman Trophy-winner and NFL quarterback is struggling with the Syracuse Mets but has begun to come alive at the plate with hits in five of the last six games. (AP Photo/John Kekis)

SYRACUSE, N.Y. (AP) — Six weeks into his latest baseball adventure, Tim Tebow is still struggling to find his stroke with the Syracuse Mets at the top rung of minor league ball.

He remains unflappable in spite of the numbers.

"I think I'm improving. I'm working, developing," Tebow said Thursday before the Mets played a night game. "I think I'm getting better, adapting to some really good players, and I think that's important."

The former NFL quarterback and Heisman Trophy winner is on a first-place team in the International League that's thrived on its pitching, and Tebow's offensive contributions have been minimal. In Syracuse's first 23 games, Tebow had just 10 hits and was batting .130 with 32 strikeouts. A recent surge of hits in six of seven games that included a game-winning, pinch-hit double boosted the average to .158, still last in the league and well below the dreaded Mendoza Line, but encouraging nonetheless.

"It definitely helps with confidence," said Tebow, who turns 32 in mid-August. "More than just confidence, getting into a rhythm. I think sometimes if you're not in rhythm you can press a little bit, swing at pitches you don't want to swing at. But when you're in a rhythm, it just flows a little bit better. I think that's important."

Since giving baseball a shot three years ago after playing in the NFL for three seasons, at midweek Tebow had these career numbers: a .230 batting average (197 hits in 856 at-bats), 46 doubles, three triples, 14 home runs, and 99 RBIs in 258 games. He also had struck out 287 times and walked 81 times and had an on-base percentage of .307, a slugging mark of .340, and an OPS of .647 (OPS is the sum of a player's on-base percentage and slugging average, a measure of an ability to get on base and hit for power).

Tebow displayed solid improvement in Double-A last year, batting .273 with six home runs, 108 total bases, and 36 RBIs in 271 at-bats over 84 games for Binghamton of the Eastern League before an injury to his right hand ended his season. The step up to Triple-A has been imposing.

"Double-A pitching is a lot of younger guys that have good velocity on the fastball but no secondary pitches," Syracuse Mets manager Tony DeFrancesco said. "Here, Tim is seeing everything coming at him but the kitchen sink. They're throwing fastballs hard in on him, they're breaking balls, they're elevating. He just hasn't seen enough of that right now — and they're throwing strikes."

Perhaps the one number that sticks out most for the chiseled, 6-foot-3, 245-pound Tebow is that he's still homerless. That's a far cry from his Double-A debut last year , not to mention his first professional at-bat .

"I think he's feeling more confident of late. I'm sure he thinks about he hasn't hit a home run yet or driving the ball," Syracuse hitting coach Joel Chimelis said. "If you play the game long enough at this level, confidence is a very big thing, knowing that you're going to go up there and you're going to hit the ball hard."

"It's a good sign for anybody to get a hitting streak, a couple of big hits, driving the ball better," added DeFrancesco. "Now, you're hoping that the power comes. He's playing a corner position in baseball, which is offensive production, so he's going to definitely need to drive some home runs soon. Getting into June you've got to be able to put up the numbers."

Tebow's struggles at the plate have brought out plenty of skeptics who think playing some day in the major leagues for the parent New York Mets is a pipe dream at best, that maybe it's time to do something else. He just smiles and remains focused on the task at hand, moments like being relegated to batting ninth as the team's designated hitter in one game an afterthought at best.

"I don't necessarily set goals," Tebow said. "For me, it's just being able to really go back and look every day at the film and know that I'm improving and constantly stay kind on that progression plan where I feel like every day, every week, every month, I'm improving. I feel like I've done that so far."

Chimelis has worked hard of late to correct Tebow's swing, which he called "real late" and something that's easily exploited at this level.

"Here in Triple-A the pitching is pretty good," Chimelis said. "They've had a lot of experience, and if they see something in a hitter they're going to expose it. But within the last week or so, he's improved. He hit about four balls hard and had nothing to show for it. It's baseball. It's so frustrating. You hit the ball right, but you don't get rewarded."

Just part of the journey.

"He's going to try to beat the odds for sure. It won't be for lack of effort, I can tell you that," DeFrancesco said. "One thing to put in perspective, he's only been playing pro ball three years. He's climbed very quick. He's at a level that maybe he's not ready for at the current time, but the at-bats are going to tell.

"It's just going to take maybe a little more time. He's not the first guy, if it doesn't work this year, come back to Triple-A again. There's been numerous players that have two, three years of Triple-A. Just look at my baseball card, I've got three or four at Triple-A. It's not that easy, and I played my whole life. So give the kid some time and some credit. It's definitely a work in progress."