Time to heel: Wilson moves on from shoe toss, preps for NFL 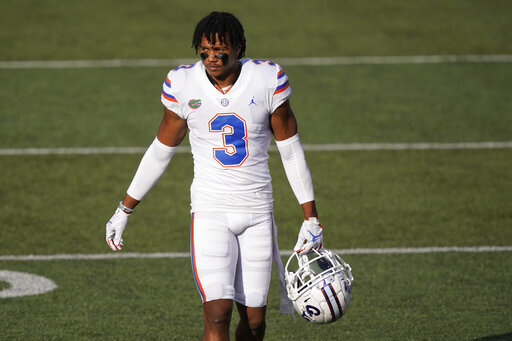 FILE - Florida defensive back Marco Wilson (3) leaves the field after an NCAA college football game against Vanderbilt in Nashville, Tenn., in this Saturday, Nov. 21, 2020, file photo. Wilson’s last two performances in Gainesville ended quite differently. He was reviled after one, revered following the other. The Florida cornerback, who gained notoriety for intentionally tossing an opponent’s shoe in December and costing the Gators a victory, turned in an eye-popping performance at the team’s pro day, Thursday, April 1, 2021, (AP Photo/Mark Humphrey, File)

GAINESVILLE, Fla. (AP) — Marco Wilson’s last two performances in Gainesville ended quite differently. He was reviled after one, revered following the other.

The Florida cornerback, who gained notoriety for intentionally tossing an opponent’s shoe in December and costing the Gators a victory, turned in an eye-popping performance at the team’s pro day Wednesday.

It could convince NFL teams he’s worth more than a middle-round pick when the draft begins at the end of this month.

“I’ve honestly never looked at any draft boards,” said Wilson, the younger brother of New York Giants cornerback Quincy Wilson. “I don’t care about that type of stuff. I honestly don’t care about where I get drafted. I just know I need a foot in the door for the NFL. I know once I get in the NFL, I can show the ability I have.

He did everything right in front of talent evaluators for 31 of 32 NFL teams, including head coaches Brian Flores (Miami), Urban Meyer (Jacksonville), Matt Rhule (Carolina) and Zac Taylor (Cincinnati).

Wilson ran the 40-yard dash in a jaw-dropping 4.34 seconds, faster than speedy receiver Kadarius Toney. He wowed everyone in attendance with 43½-inch vertical jump, huge ups for a 6-foot defender. He covered 11 feet, 4 inches in the broad jump and did 26 repetitions of 225 pounds on the bench press, an impressive feat for a 191-pound guy.

“I’m just proud of putting everything together,” he said.

Everything seemed to be falling apart for Wilson the past few years.

He looked like he would be a college star after starting every game as a freshman in 2017 and finishing with a team-leading 10 pass breakups, including one at the goal line late that helped beat Tennessee. He was one of the few bright spots on a team that lost six of its final seven games, went 4-7 and dealt with a coaching change.

But Wilson tore a ligament in his left knee in the second game of his sophomore season and never appeared to fully recover. He struggled in 2019 and again last season. He gave up two long touchdown passes in a loss at Texas A&M in October, but the low point came against LSU two months later.

Wilson tackled tight end Kole Taylor for a short gain on a third-and-10 play with a couple minutes remaining. Instead of celebrating with teammates, Wilson picked up Taylor’s size 14 cleat, which came off during the tackle, and inexplicably tossed it several yards in the opposite direction.

Wilson was flagged for unsportsmanlike conduct, a 15-yard penalty that turned a would-be punt into a fresh set of downs. The Tigers moved the chains once more, setting up Cade York’s 57-yard field goal through a heavy fog that put LSU up 37-34.

The Tigers held on from there for a stunning upset that essentially eliminated the Gators from College Football Playoff contention.

Wilson was quite literally the heel, getting so much vitriol on social media that he had to change his settings so random fans couldn’t comment on his posts.

He couldn’t duck the topic when NFL executives asked about it.

“I don’t run away from it. It’s part of my life, and things happen,” he said. “I just answer them in the way I need to, which is the LSU game had a lot of energy. Made a good play. I was excited and just made an unfortunate mistake. That’s how that is.

“I wished it never happened, but things happen. Everything’s not going to go your way.”

Wilson’s coaches, teammates, friends and family members supported him afterward, but he said the incident “opened my eyes to a lot of things.”

“I just really learned how a silly mistake could affect me,” he said. “I was getting just disgusting messages in my Instagram, stuff like that. Just seeing how quick people can turn on you and how negative they can really be in a tough situation.

“But it’s understandable. I learned that lesson. I also learned that the brothers I had on this team, they’re really here for me. They didn’t like beat me up or anything in the locker room. They just talked to me.”

Wilson had no choice but to move on since Florida played Alabama the following week in the Southeastern Conference championship game. Wilson ended up opting out of the Cotton Bowl to start preparing for the NFL. He trained at EXOS in Arizona, and clearly well prepared for Florida’s pro day.

“I’m really happy for him,” Gators coach Dan Mullen said. “He got to come out and turn some heads with some of the numbers he put up.”