Too much at stake for No. 23 Aztecs to underestimate UNLV 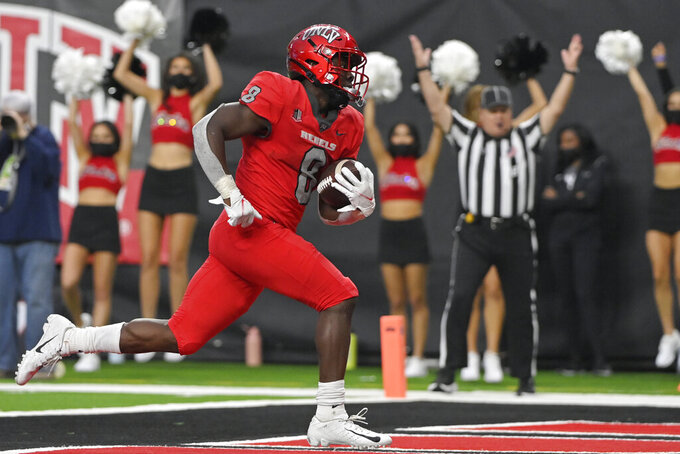 UNLV running back Charles Williams (8) runs into the end zone for a touchdown against Hawaii during the second half of an NCAA college football game Saturday, Nov. 13, 2021, in Las Vegas. (AP Photo/David Becker)

LAS VEGAS (AP) — Three years after a devastating loss to UNLV, No. 23 San Diego State knows not to overlook the Rebels this time.

There’s simply too much at stake for the Aztecs (9-1, 5-1 Mountain West), who can keep the inside track to winning the West Division and playing for the MWC championship if they beat the Rebels (2-8, 2-4) on Friday night in their first visit to Allegiant Stadium.

While that 2018 upset loss to UNLV was in San Diego, this time the Aztecs will have to try not to be distracted by the glitz of Sin City. Allegiant Stadium is the fancy stadium built by the NFL’s Raiders which also serves as the Rebels’ home.

Three years ago, SDSU was on track to reach the MWC title game but was upset at home 27-24 by UNLV, which was a 23-point underdog.

“I think we had a little of underestimation about them and we just know now we can’t do that, especially with the team they have now,” senior tight end Daniel Bellinger said.

The Rebels are coming off consecutive wins, at New Mexico and against Hawaii.

NEED TO WIN OUT

The Aztecs need to beat UNLV and then Boise State in their regular-season finale the day after Thanksgiving in order to reach the MWC title game. The Aztecs currently have the edge in the West Division over Fresno State (5-2). SDSU lost to Fresno State, which would get the nod if the teams end up tied.

ALL EYES ON THE PUNTER

SDSU punter/kicker Matt Araiza remains the Aztecs’ most dangerous weapon. The junior from San Diego leads the nation in punting (52.25 yards) and is on pace to set an FBS record. Araiza has 34 punts that have traveled at least 50 yards, including a long of 86 yards. He has 29 punts downed inside the 20-yard line. Araiza also tied a career high with three field goals in a 23-21 win against Nevada, including his first career game-winner with 1:21 left, from 35 yards.

Besides the 2018 upset loss to UNLV, the Aztecs were also stunned by the Rebels in 1996. That 44-42 loss, to a previously winless UNLV team at Sam Boyd Stadium, cost the Aztecs a likely berth in the hometown Holiday Bowl.

A victory Friday night would give SDSU double digits in wins for the fifth time in seven seasons. If they win out in the regular season and win the MWC championship game, they will set a school record with 12 victories.