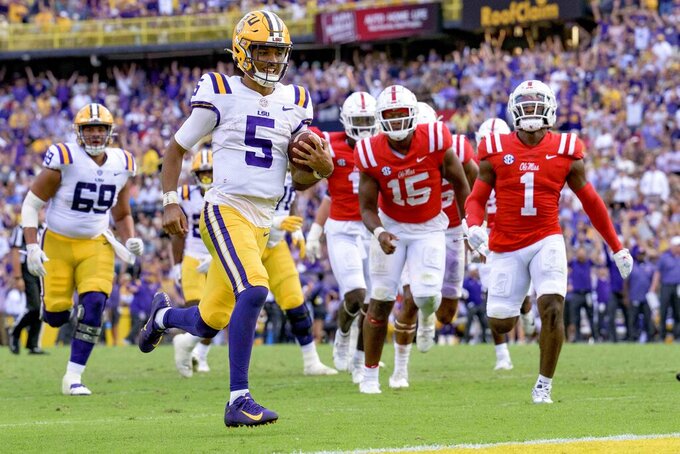 LSU quarterback Jayden Daniels (5) smiles as he scores a touchdown against Mississippi during the second half an NCAA college football game in Baton Rouge, La., Saturday, Oct. 22, 2022. (AP Photo/Matthew Hinton)

As the number of unbeaten teams in major college football was whittled to six, Clemson emerged as the best bet to reach the playoff — even though the Tigers don't appear to be a serious threat to win a national championship.

The Tigers (8-0) head into the last month of the season a virtual lock to return the Atlantic Coast Conference title game after rallying for a sloppy 27-21 victory against No. 14 Syracuse on Saturday.

The Orange were one of three undefeated teams to fall Saturday along with No. 9 UCLA at No. 10 Oregon and No. 8 Mississippi at LSU.

The Ducks have put that opening-weekend humiliation against No. 1 Georgia in the rearview mirror and played like the Pac-12's best team since.

Brian Kelly's Tigers closed the out Ole Miss with a 42-3 run and now head into an off week tied atop the SEC West, and preparing for a visit from N o. 6 Alabama on Nov. 5.

Not many expected 'Bama-LSU to be a big one this season, but here they are.

As for those other Tigers, the ones who play in South Carolina's Death Valley, they survived four turnovers and quarterback DJ Uiagalelei being benched against Syracuse.

"As far as DJ, DJ’s our starter. DJ’s our leader. Ain’t nothing changed there,” Swinney told reporters.

Clemson has knocked off its four toughest division foes (No. 13 Wake Forest, No. 23 North Carolina State, Florida State and Syracuse) in the last five weeks.

The Tigers have won a high-scoring game and a defensive struggle. They have held off a late rally and erased a fourth-quarter deficit.

Clemson's highly touted defensive line feasted on Syracuse in the second half and freshman quarterback Cade Klubnik came off the bench to guide the Tigers to a 17-point fourth quarter, mostly by handing off to Will Shipley (career-high 172 yards rushing) and Phil Mafah (94).

There is no doubt Clemson is really good, but this is the time of the year we have grown accustomed to the Tigers going into Death Star-mode and tearing through the ACC.

Aside from one blowout against a tattered Boston College team, Clemson's victories against Wake, N.C. State, FSU and Syracuse have come by a combined 28 points.

In November, Clemson plays at Notre Dame (4-3) before a three-game homestand against Louisville (4-3), Miami (3-4) and South Carolina (5-2). No other playoff contender has a path to the playoff quite so accommodating the rest of the way.

Among the six remaining unbeaten teams, four of them (No. 1 Georgia and No. 3 Tennessee, No. 2 Ohio State and No. 4 Michigan) play each other.

No. 8 TCU, which overcame a double-digit, second-half deficit for the second straight week to stay perfect, still has Big 12 road game against No. 20 Texas and defending conference champ Baylor.

Clemson might look vulnerable, but it will be a healthy favorite in all its remaining games, and will likely be the same in the ACC title game.

An undefeated season will get Clemson back to the playoff for the seventh time, but compared to the top teams in the Southeastern Conference and Big Ten, the Tigers seem to be a notch or two behind.

Oregon turned the first top-10 matchup in the Pac-12 in four years into a Bo Nix Heisman campaign commercial.

The Auburn transfer, whose career had been defined by inconsistent play, was at his very best against UCLA.

He was 22 for 28 for 283 yards and five touchdowns passes. Nix also chipped in 51 yards on the ground as the Ducks displayed devastating balance with 261 yards rushing. The last time Oregon's offense was this explosive and efficient UCLA coach Chip Kelly was leading the Ducks. Kelly is now 0-4 against his old school.

Nix was a blue-chip recruit who started as a freshman at Auburn. There were some good moments for the son of former Auburn quarterback Patrick Nix, but he never got substantially better over three seasons.

Now, Nix already has a career-high 17 touchdown passes and just one interception since the two he threw against Georgia.

Losing to the defending national champion by 46 points is going to be tough to overcome, but the Ducks have a chance to break the Pac-12's five-year CFP drought.

Mario Cristobal’s first season at Miami is officially a mess after the Hurricanes had eight turnovers in a loss to Duke.

At 3-4, Miami is going to have a hard time reaching a bowl game.

“If someone’s not playing hard, they have to go play somewhere else. What we have to do requires tough people. To turn a program, rebuild it, it requires tough-minded people willing to do the work.” Cristobal said.

That’s tough big for a coach hailed as a savior, returning to his hometown to lead his once-great alma mater.

But it should be noted: Miami went 7-5 last season under Manny Diaz, winning five of its last six. At Duke, first-year coach Mike Elko took over a team that went winless in the ACC last season and improved to 5-3 by beating the Hurricanes.

The rebuild at Miami wasn't supposed to be this hard.

The Texas message boards will have a field day with this: The Longhorns were flagged 14 times in loss to No. 11 Oklahoma State. The Cowboys were not penalized once in beating Texas for the sixth time in eight meetings. Even Cowboys coach Mike Gundy called it "the difference in the game” as Oklahoma State — like Oregon — scored one for the teams left behind in conference realignment. ... Not to be outdone by its nonrival from Austin, Texas A&M lost to South Carolina for the first time ever. In Year 2, Gamecocks coach Shane Beamer's program seems to be ahead of Jimbo Fisher's Aggies (3-4) in Year 5. ... C.J. Stroud and No. 2 Ohio State needed about two and half quarters to figure out the Iowa defense, but finished with 54 points, the most ever scored against the Hawkeyes in Kirk Ferentz's 24 seasons as coach. As for the Iowa offense, six turnovers and eight first downs. ... Maybe the Buckeyes will be challenged next week at No. 16 Penn State, which got right at home against Minnesota. ... Liberty thumped BYU at home to move to 7-1. Coach Hugh Freeze's Flames haven't played the toughest schedule, but their only loss was by one point at Wake Forest. Next up, Liberty visits Arkansas on Nov. 5. It's been an impressive job by Freeze after having to replace QB Malik Willis. When that Auburn job opens up, it will be fascinating to see how much interest Freeze, who was 39-25 with two victories against Alabama while at Ole Miss, gets from the decision-makers on The Plains. ... Get to know Behren Morton. The redshirt freshman and former four-star recruit passed for 325 yards and a couple of touchdowns for Texas Tech in a victory against West Virginia. ... In front of a packed house, No. 25 Tulane jumped out to a 35-0 lead and then held on to beat Memphis in the Green Wave's first game as a ranked team since 1998.