Top NHL picks stay in school, including No. 1 overall pick 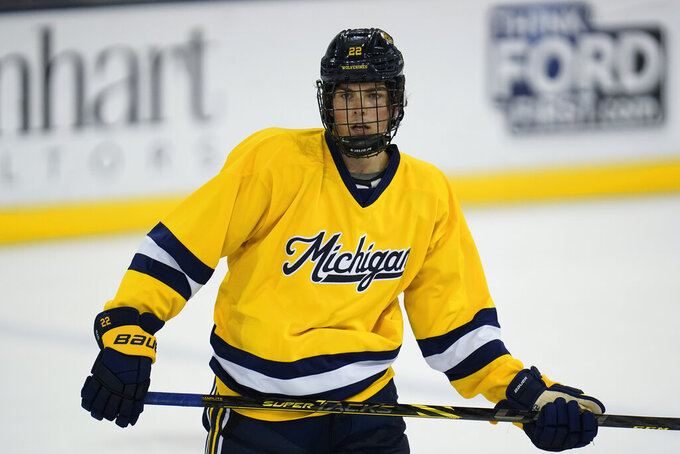 University of Michigan defenseman Owen Power skates during an NCAA college hockey practice in Ann Arbor, Mich., Wednesday, Sept. 22, 2021. Power passed on a chance to make millions this season with the Buffalo Sabres, who selected the defenseman overall in July. He decided to stay in school and return for his sophomore season with the Wolverines, ranked No. 3 in the preseason. (AP Photo/Paul Sancya)

ANN ARBOR, Mich. (AP) — Owen Power stood in a sea of maize-clad fans pumping pompoms and cheering on Michigan's football team in a win over Washington this fall.

Power is 6-foot-5 and has some notoriety as the No. 1 overall pick in the NHL draft, but he blended right in with his fellow students among the 108,345 fans under the lights on an electric night at the Big House.

That's just the way the 18-year-old Canadian wanted it.

Power passed on a chance to make millions this season with the Buffalo Sabres, who selected the defenseman No. 1 overall in July. He decided to stay in school and return for his sophomore season with the Wolverines, ranked No. 3 in the preseason.

“I just thought there’s no need to rush into it," he said in an interview with The Associated Press.

The Mississauga, Ontario, native is the first player drafted No. 1 overall not to go straight to the NHL since St. Louis selected Erik Johnson in 2006 and he went to play at Minnesota for a season. He is only the fourth NCAA player to be drafted No. 1 overall, joining Michigan State’s Joe Murphy (1986), Boston University’s Rick DiPietro (2000) and Johnson.

Power spent last year walking around a largely empty and eerie campus in Ann Arbor and played his freshman season without fans in the stands because of COVID-19 restrictions. Without a doubt, the pandemic played a part in Power's decision to stay.

“He wants a normal year," Michigan coach Mel Pearson said. “He came to college for a reason, came to the University of Michigan for a reason: To go to class, to be a college student, to hang out with kids, to go to a football game on a Saturday and enjoy that experience."

A majority of the 2021 NHL draft class elected to spend one more season developing before making the jump to the world's top hockey league, and many of them are Power's teammates. Including Tyler Boucher (Ottawa, No. 10 pick), who’s committed to play at Boston University, five of the top 10 draft choices playing college hockey the season after they were chosen matches the total for the previous four drafts combined.

Dallas Stars general manager Jim Nill, who came up as a scout and director of player development, believes the pandemic-shortened season last year played a role in this anomaly of so many top picks going back to school.

“I think the disruption of the season last year probably comes into play,” Nill said. “If they played a full season, would’ve got 50 games in and gone to a national championship, played more hockey, developed more, maybe a different story.”

Michigan had to withdraw from the NCAA Tournament because of a virus outbreak, but the Wolverines are loaded this season: Four of the top five NHL draft picks and five of the top 24 are wearing maize and blue this season to take a shot at winning it all.

“It’s safe to say that they’ve turned down a considerable amount of money and investment," said Michigan associate head coach Bill Muckalt, who played in the NHL for five seasons after winning two national titles with the Wolverines. “They still feel that they can get better and improve here, and we feel the same way.”

Michigan has seven first-round picks — the most in NCAA history — and 13 players on the roster have had their names called in the NHL draft.

“Everyone expects Michigan to probably win the national championship," said Jack Hughes, entering his third season with the Devils. “It’s like almost like a Duke basketball or Kansas basketball-type thing, having four of the top five kids drafted. That’s unheard of, and I don’t know if that will ever happen again."

During a recent practice, Power was on a power play with Beniers, Hughes, Johnson and 2020 first-round pick Brendan Brisson. They made tape-to-tape passes as if they had played together for years and peppered the goaltender with shots.

“When we were playing a little scrimmage, I was like, 'Wow, this is really fun hockey to play,'" Johnson said.

The talented Wolverines are not the only ones choosing college over pro hockey this season.

Three other first-round picks this year — Harvard’s Matthew Coronato, Minnesota’s Chaz Lucius and Wisconsin’s Corson Ceulemans — also chose to stay in college for at least another season. Jake Sanderson, drafted No. 5 overall by Ottawa in 2020, is back at North Dakota for his sophomore season.

Sanderson and Power are the latest defensemen taken high in the draft to stay in college.

Colorado took Cale Makar No. 4 in 2017 and he spent two years at UMass. Vancouver selected Quinn Hughes, brother of Jack and Luke, No. 7 overall in 2018 and he returned to Michigan for another season. Columbus took Zach Werenski No. 8 in 2015 and he, too, came back to play another year for the Wolverines.

“In my years of college hockey, I never saw a player regret taking another year," said Seth Appert, who coaches the Sabres' AHL team. “I saw a lot of players regret leaving a early because you need to be ready, and it’s not just as a hockey player.

“Once you come to this level, it’s your job, you’re a professional. And if you’re a high pick, there’s going to be cameras in front of you and there’s pressure to perform both from within your circle and within the organization and the fans and the media."