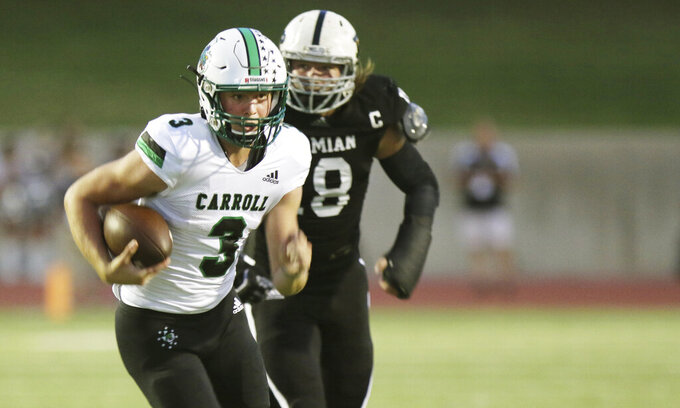 FILE - Southlake Carroll quarterback Quinn Ewers (3) runs for a first down against Permian during the first half of a high school football game in Odessa, Texas, in this Friday night Sept. 13, 2019, file photo. Quinn Ewers, considered the top quarterback prospect in the class of 2022, said he is skipping his senior year of high school in Texas and plans to enroll at Ohio State for the upcoming semester. (Ben Powell/Odessa American via AP, File)

Quinn Ewers, considered the top quarterback prospect in the class of 2022, said he is skipping his senior year of high school in Texas and plans to enroll at Ohio State for the upcoming semester.

In a Twitter post, Ewers explained he would soon be completing the course necessary to graduate from Southlake Carroll High School outside Dallas.

The five-star recruit said his decision was influenced by Texas rules which prohibit high school athletes from earning money from endorsement and sponsorship deals. Last month, the NCAA lifted its long-time ban on athletes being compensated for their names, images and likenesses.

Ewers said his preference would be to “complete my senior season at Southlake Carroll along with teammates and friends I've taken the field alongside the past three years.”

“However, following conversations with my family and those I know have my best interests in mind, I've decided it's time for me to enroll at Ohio State and begin my career as a Buckeye,” he wrote.

Ewers' parents told Yahoo! Sports that their son has several potential deals lined up, including one that could land him equity in a company that makes kombucha, but a Texas law aimed at giving college athletes NIL rights prevents high school athletes from doing so.

Ewers is one of the most highly rated players in next year's signing class. He initially committed to Texas last year but then flipped to Ohio State.

“This is not just a financial decision; this is about what's best for my football career,” Ewers said. “At 18, and with one final class about to be complete to earn my high-school degree, I feel it's time to get the jump on my college career that is available to me.”

At Ohio State, Ewers would step in late to an ongoing competition to replace first-round draft pick Justin Fields this year in Columbus.

The Buckeyes have three scholarship quarterbacks on the roster, but none of them have thrown a college pass. CJ Stroud and Jack Miller are going into their second seasons with the Buckeyes. Kyle McCord is a class of 2021 signee.