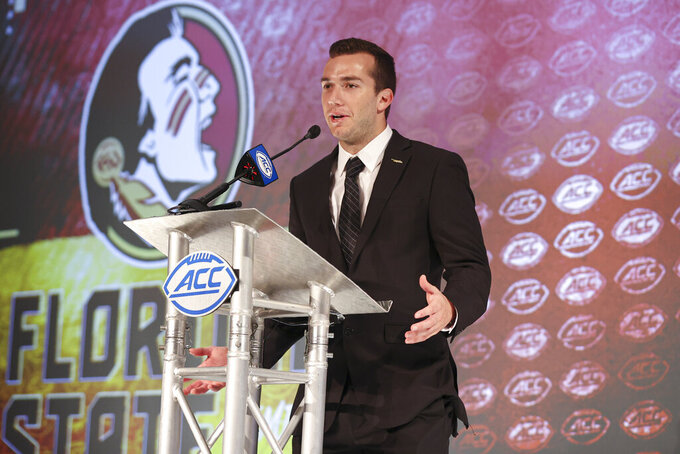 FILE - Florida State quarterback McKenzie Milton answers a question during an NCAA college football news conference at the Atlantic Coast Conference media days in Charlotte, N.C., in this Thursday, July 22, 2021, file photo. Milton, who won his last 24 starts at UCF, now is attempting a comeback with Florida State and competing with Jordan Travis for the right to open the season as the Seminoles’ starting quarterback.(AP Photo/Nell Redmond, File)

The Seminoles have 14 transfers with more than 330 games of college experience on the roster after going 3-6 in Norvell's first year in Tallahassee.

When Florida State opens its season Sunday night at home against No. 9 Notre Dame, the ‘Noles’ could have as many as six players who were at other schools last year in the starting lineup.

“I think a lot of it had to do with kind of where we were in the moment. We came off last year when we were the youngest team in college football. I mean, there’s been quite a bit of change around our program,” Norvell told The Associated Press.

This season will be the first since the NCAA tweaked its rules to give all football players the freedom to transfer once in their careers and be immediately eligible to play at their new school — no questions asked.

After years of incremental steps to loosen restrictions around transfers, full-on college football free agency is here. Teams can now revamp rosters and bolster depth charts in a manner similar to the way it is done in the NFL.

No team has more riding on transfers this season than Florida State, though there are others. Michigan State's second-year head coach, Mel Tucker, brought a bunch of new players into the program via the portal and had about a dozen go out. Kansas also has a dozen transfers on the roster for new coach Lance Leipold, who lured several of his players from Buffalo to Lawrence.

But Tucker and Leipold are not facing the same win-now pressure as Norvell. The once-mighty Seminoles have had three straight losing seasons and two head coaches since Jimbo Fisher left for Texas A&M at the end of the 2017 season.

The instability has taken a toll on recruiting and led to roster attrition. Facing another year of relying on inexperienced players to quickly blossom, Norvell decided Florida State didn't just need an influx of talent. It needed veteran leadership and players who understand what it takes to compete at the highest levels of college football.

“And I’m excited to see how it’s all going to come together,” Norvell said.

Norvell told the new guys he needed them to be assertive and to set the tone when it came to practice, preparation and work ethic.

If Florida State is to once again become an elite program that can rival Clemson in the Atlantic Coast Conference, it will need to get there through recruiting. There are positive signs on that front. Florida State currently holds 18 verbal commitments for the class of 2022, a group ranked 10th in the country by 247 Sports' composite ratings.

If Norvell is going to attract the type of players that helped Florida State win three national titles, the last in 2013 under Fisher, the Seminoles need to show progress in 2021.

“You always want to help put the program in the best position to achieve success now,” Norvell said. “We have a long-term vision of what this is going to look like. And still with the guys that we’ve brought in, we feel like we’re addressing both.”

Texas State went even deeper into the portal than Florida State. The Bobcats' last signing class had 23 transfers and just two high school players — an ominous sign for those who fear the transfer portal will harm prep recruiting.

Bobcats coach Jake Spavital said the decision to load up in transfers does not reflect a long-term strategy. The combination of a very inexperienced roster and last year's pandemic eligibility freeze for current players led to the unique class.

“What we looked at with this portal is it gives us an opportunity to maybe do some immediate fixes, but it also allows us to get developmental kids that are coming from a Power Five (school) that have, because last year didn't count, five years to play four,” Spavital said.

For most programs, the transfer market is more for filling holes here and there than an extreme makeover.

At Indiana, Tom Allen's program is trending up after consecutive winning seasons. The No. 17 Hoosiers are bringing back many of the key players from last year's 6-2 team, but needed help at running back, on the edges of the defensive line and at receiver, where former Florida State receiver D.J. Matthews was among the additions.

Like a lot of coaches, Allen targets transfers the staff has recruited or coached before.

“I felt like we knew what we were getting character-wise,” Allen said.

At Florida State, Norvell said he's been encouraged by the way the the holdovers have welcomed the newcomers.

“These guys, they know what we’re building and they know how we’re building it," Norvell said. “We’re going to do it with the right guys. And, you know, whether they’ve been here for a short time or a long time when they’re here, we’re all Seminoles.”