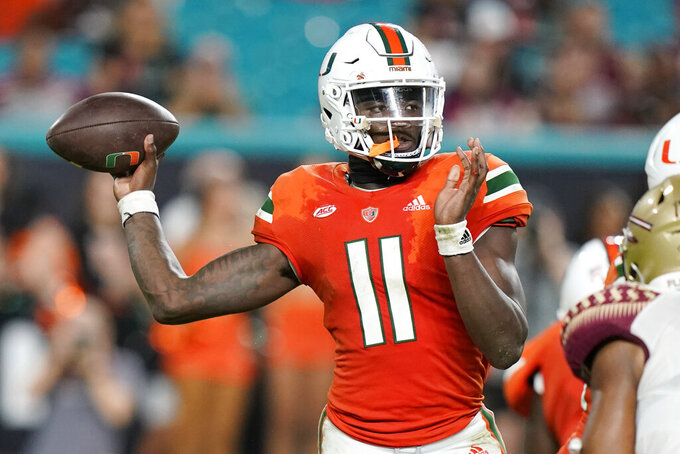 Miami quarterback Jacurri Brown (11) stands back to throw during the second half of an NCAA college football game against Florida State, Saturday, Nov. 5, 2022, in Miami Gardens, Fla. (AP Photo/Lynne Sladky)

Travis completed 10 of 12 passes for 202 yards before being removed early in the fourth quarter. Florida State exceeded 200 yards rushing for the fourth straight game with 225.

“This is a big game that means so much to our program, it means so much to our fan base, the players,” Seminoles coach Mike Norvell said. “You get a chance to leave a legacy. Everybody will remember this game. We were able to dominate that game with the true character of what this team is all about. I thought that was something that showed throughout.”

Miami quarterback Tyler Van Dyke re-aggravated an injury to his right throwing shoulder early in the second quarter. Van Dyke, who first sustained the injury against Duke on Oct. 22 and missed the next game, favored his shoulder without contact after an incomplete pass. He returned for the next drive but left for good after another errant pass missed its target.

It was the Hurricanes’ fourth straight loss at home, their longest skid in a season since 1973. They also have not scored a touchdown in nine consecutive quarters.

Miami leads the series against its in-state rival 35-32, but Florida State has won the last two.

“Days like these are really painful,” Miami first-year coach Mario Cristobal said. “There is no excuse, no side-stepping it or sugarcoating it. That’s why I came here. We have to go to work. We have to do lots of it.”

The Seminoles ended their first two drives on Travis’ touchdown passes to Ontaria Wilson and DJ Lundy. Travis connected with Wilson for 56 yards 1:38 into the game, then found Lundy open in the end zone for a 2-yard score. Lundy, a linebacker, was utilized in the short-yardage situation.

Benson’s touchdown runs from 13 yards and 1 yard in the second quarter made it 28-3.

“I’m very proud, seeing how far we came as a football team,” Travis said. “I’m very impressed with the guys, how they came in to work this week. You could just see on everyone’s faces. We wanted to win this game bad. We came in and we dominated.”

The Hurricanes drove to the Florida State 2-yard line late in the third quarter but freshman quarterback Jacurri Brown failed to retrieve a poor snap from center that lost 23 yards with Jarred Verse recovering the ball for the Seminoles.

Travis threw his third touchdown pass, an 8-yard completion to Camren McDonald on the first play of the fourth quarter.

Andres Borregales capped the Hurricanes’ opening drive of the game with a season-high 47-yard field goal.

The lopsided home defeat was Miami’s largest since a 58-0 drubbing against Clemson on Oct. 24, 2015. That loss resulted in coach Al Golden’s firing the following day.

“The guys truly believe in coach Cristobal,” Will Mallory, the Hurricanes senior tight end, said. “He’s going to get this going and he’s going to find the right guys to do it. Unfortunately, things haven’t gone the way we wanted to but the most important thing we can do is finish this season out strong.”

The Seminoles are going to a bowl game for the first time since 2019. It’s a big step in the rebuilding process for the Seminoles, who went 3-6 in the pandemic-shortened 2020 season and 5-7 last year. FSU lost the Sun Bowl to Arizona State in 2019, didn’t qualify for a bowl in 2018 and got its most recent postseason win by topping Southern Miss at the 2017 Independence Bowl.

Miami: The path to the postseason gets very complicated now for the Hurricanes, who need to go 2-1 in their final three games just to finish 6-6 and meet the minimum standard for bowl eligibility. And considering one of those games is against Clemson, the Hurricanes basically have no more room for error.

Florida State got a small amount of attention from AP Top 25 voters last week, but still has a long way to go to get back into the rankings. Miami hasn’t been ranked since late September and probably has no chance of changing that by season’s end.

Florida State: The Seminoles visit Syracuse on Nov. 12 for their final road trip of the regular season. They finish at home against Louisiana-Lafayette (Nov. 19) and Florida (Nov. 26).

Miami: The Hurricanes visit Georgia Tech on Nov. 12, then go to Clemson on Nov. 19 before the regular-season finale at home against Pitt on Nov. 26.