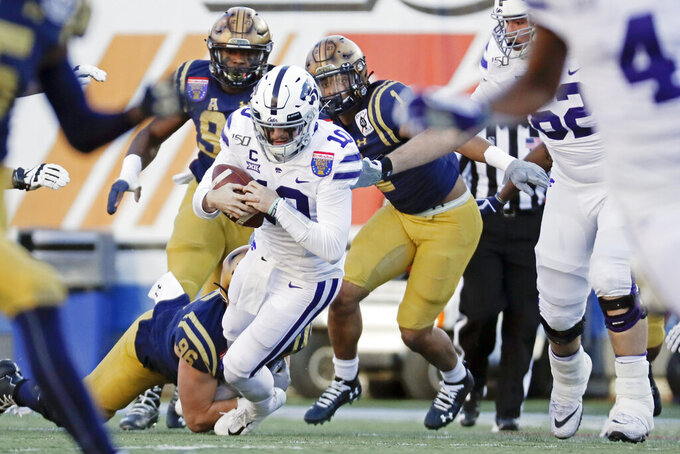 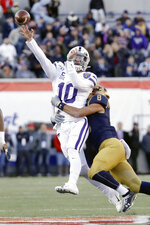 MEMPHIS, Tenn. (AP) — Navy built the biggest turnaround of any team in college football this season by relying on the nation’s most prolific rushing attack.

So, naturally, the 21st-ranked Midshipmen won the Liberty Bowl on Tuesday by completing a fourth-down halfback option pass in the final minute.

Perry was named the Liberty Bowl most valuable player after rushing for 213 yards and throwing a touchdown pass.

Perry ran for 2,017 yards this year to set a Football Bowl Subdivision record by a quarterback. The mark had been owned by Jordan Lynch, who ran for 1,920 yards for Northern Illinois in 2013.

But the ball was only briefly in Perry’s hands on the play that mattered most of all.

Twenty-nine seconds remained when Navy (11-2) snapped the ball at the Kansas State 46. Perry pitched right to Williams, who found Warren racing wide open down the right side of the field.

“The corner was really aggressive, ran right past me, so I knew I’d be wide open,” said Warren, who also scored on a 20-yard reverse in the third quarter. “I just tried to make a play on the ball, come down with it and set the team up for success.”

That big play left things up to Nichols, who missed a 38-yard field goal earlier in the fourth quarter. This time, Nichols stayed poised and made the kick even after Kansas State (8-5) called three straight timeouts in an attempt to ice him.

“Obviously you never want to miss,” Nichols said. “But when you do, you need to make sure you bounce back, so I was glad to have another opportunity to do that.”

A most fitting way to end a bounce-back season.

After going 3-10 last year, Navy matched the second-biggest season-to-season improvement in win-loss record of any team in Football Bowl Subdivision history. Hawaii went 9-4 in 1999 after finishing 0-12 in 1998.

“Everything that’s happened this year is not surprising to me because they did the work, they paid the price," Niumatalolo said. “They did everything that was asked of them. I couldn’t be more happy for a group of young men.”

Navy outgained Kansas State 421-170 but wasted a couple of opportunities to put the game away. The Mids led 17-10 late in the third quarter when a holding penalty wiped out a 31-yard run by Perry that would have given them first-and-goal at the 2. Navy ended up punting.

Nichols then sent his 38-yard field goal attempt wide left with 8:26 left in the game.

Kansas State finally got its offense going at that point, as Skylar Thompson connected with Wykeen Gill on a 15-yard completion and a 42-yard pass on back-to-back plays. Those long gains set up Thompson's 1-yard sneak that tied the game with 5:14 left.

“I thought we did a really nice job of slowing them down in the red zone," Kansas State coach Chris Klieman said. “Give them credit. They pulled out a couple of trick plays at the right time, and they made those plays."

Navy: The Mids set a school record by rushing for an FBS-leading 4,687 yards this season, but they also had a vastly improved defense that held Kansas State in check for much of the day. Kansas State's offense didn't reach the end zone for the first 54 1/2 minutes of the game. The Wildcats' first touchdown came on a 66-yard punt return by Phillip Brooks, who also dropped a potential TD pass on the opening series.

Kansas State: The Wildcats ranked fourth nationally in time of possession during the regular season but couldn't keep their offense on the field Tuesday as Perry controlled the clock. Kansas State still has reason to feel good about itself. Picked before the season to finish ninth out of 10 teams in the Big 12, the Wildcats instead won eight games and stunned eventual Big 12 champion Oklahoma in Klieman's debut season.

Perry’s 213 yards rushing represented the second-highest total in the Liberty Bowl’s 61-game history. Colorado’s Bob Anderson rushed for 254 yards in a 47-33 victory over Alabama in 1969. ... The announced attendance of 50,515 represented the smallest Liberty Bowl crowd since 1997.

Navy will head overseas to open the 2020 season Aug. 29 by facing Notre Dame at Dublin, Ireland. The Mids will have a tough time matching Perry's production. Freshman Perry Olsen backed up Perry this season.