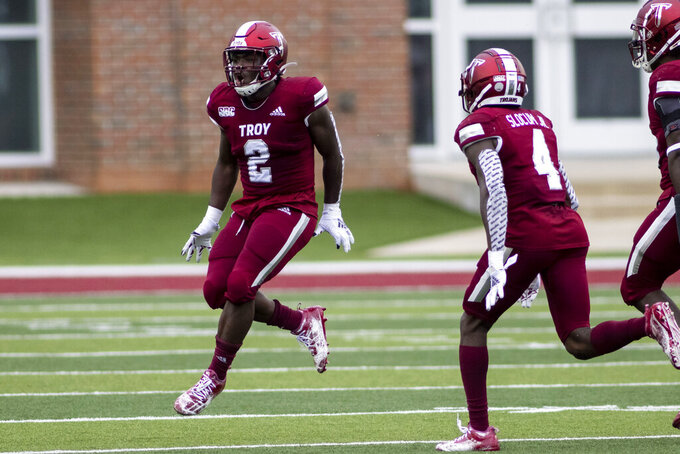 FILE - Troy linebacker Carlton Martial (2) celebrates a third-down stop against Coastal Carolina during an NCAA college football game, Saturday, Dec. 12, 2020, in Troy, Ala. Martial is poised to become the all-time leading tackler in FBS history, likely in the next couple of weeks. (AP Photo/Vasha Hunt, File)

Troy could break a tie with Arkansas State for the most Sun Belt titles if it wins No. 7. The Trojans haven't won a league championship since 2017 while Coastal Carolina is seeking its second in three years. The Chanticleers also made the league title game in 2020 but it was cancelled because of a COVID-19 outbreak. The Trojans are receiving the 26th-most votes and could enter the Top 25 for only the second time in program history and first since 2016 with a win. The Chanticleers are trying for their third-straight 10-win season.

Troy's Kimani Vidal-led running game against Coastal Carolina's defense. Vidal's late-season surge pushed him to the 1,000-yard mark. He has topped 200 rushing yards in each of the Trojans' last two games, totaling 450 yards and six touchdowns. The Chanticleers have been solid against the run, ranking seventh in the Sun Belt and third nationally with 133.7 yards allowed per game.

Coastal Carolina: QB Grayson McCall's status remains unclear. The three-time Sun Belt player of the year has been out with a foot injury suffered Nov. 3 against Appalachian State. Jarrett Guest has gone 26-of-57 passing with three interceptions and one touchdown in the past two games, including a 47-7 loss to James Madison.

Troy: LB Carlton Martial spearheads a Top 10 scoring defense. Martial already holds the FBS career tackling record with 554 and for the second straight year is a finalist for the Burlsworth Trophy given to the top player who began his career as a walk-on. He's the Sun Belt defensive player of the year.

Coastal Carolina is 31-5 since the start of the 2020 season. That's tied with Cincinnati for the third-best record in FBS during that span. ... The Chanticleers have won the last three meetings by a combined 12 points (35-28, 42-38, 36-35). ... Troy has held eight opponents under 100 rushing yards, tied for third nationally and the most in the program's FBS history. ... The Trojans have already matched their win total from the past two seasons combined. ... The Chanticleers are 10-2 in road Sun Belt games over the past three seasons.