Trump honors football coach Holtz as 'one of the greatest' 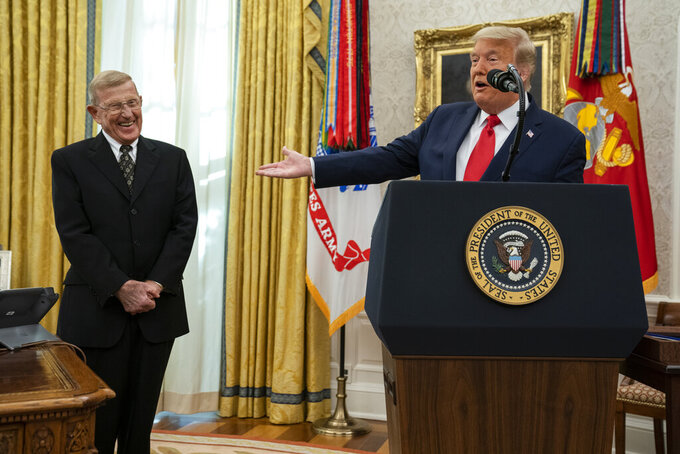 President Donald Trump speaks during a ceremony to present the Presidential Medal of Freedom to former football coach Lou Holtz, in the Oval Office of the White House, Thursday, Dec. 3, 2020, in Washington. (AP Photo/Evan Vucci)

WASHINGTON (AP) — President Donald Trump on Thursday called Lou Holtz "one of the greatest coaches in American history” as he honored the college football Hall of Famer and political ally with the nation's highest civilian honor.

Holtz, whose 34-year coaching career included the 1988 national title at the University of Notre Dame, received the Presidential Medal of Freedom during an Oval Office ceremony. Holtz led six different programs to bowl games and is an outspoken Trump backer.

Holtz is one of several sports figures Trump has awarded the Medal of Freedom during his time office.

Holtz, 83, said said that being honored by Trump made the award particularly meaningful.

“I’m even prouder to receive it from President Donald Trump," said Holtz, who added that Trump was the "greatest president in my lifetime”

A graduate of Kent State, Holtz also served seven years as an officer in the U.S. Army Reserves.

The West Virginia native was among the speakers at this year’s Republican National Convention, offering Trump a strong endorsement while attacking the president’s Democratic rival, Joe Biden. In his remarks, Holtz called Biden a Catholic “in name only.” Biden is a practicing Catholic.

Notre Dame’s president, Rev. John I. Jenkins, later issued a statement admonishing the former coach for using the university’s name in his remarks, saying it “must not be taken to imply” that Notre Dame endorses Holtz’s views, any candidate or any political party. Jenkins also admonished Holtz for questioning the “sincerity” of Biden's faith.

Trump announced the week after Holtz's convention speech that he would honor the retired coach with the medal.

“Wherever Lou went football glory followed," Trump said at a ceremony that included about 30 people, most of whom did not wear masks. Holtz disclosed on Nov. 19 that he had tested positive for the coronavirus.