Tucker trying (remotely) to help people get to know him 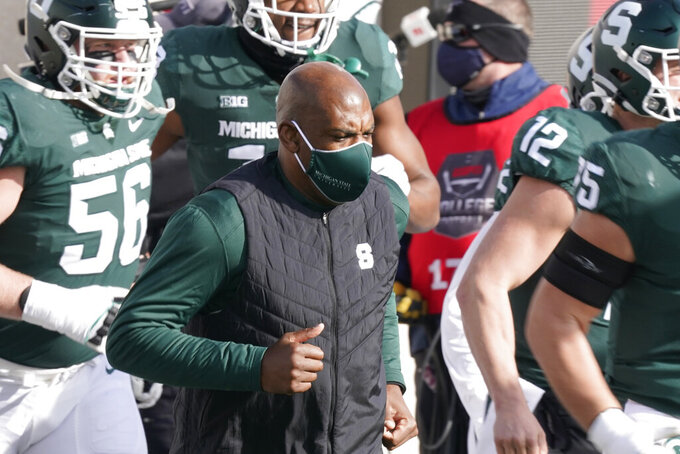 FILE - Michigan State head coach Mel Tucker runs onto the field before the first half of an NCAA college football game against Indiana in East Lansing, Mich., in this Saturday, Nov. 14, 2020, file photo. In a season of video conferences and empty seats, new Michigan State coach Mel Tucker is doing his best to help people get to know him. (AP Photo/Carlos Osorio, File)

In the middle of a discussion about recruiting during a pandemic, Mel Tucker went off on a bit of a tangent.

“Where normally we may be in the same room doing this, I could maybe bring more brevity to the situation and be more concise with the questions, with the answers,” the Michigan State coach said. "But since we’re doing it like this on Zoom and this is my first year here, and I know you guys are trying to get a feel for me, trying to get a feel for my program, I have to sometimes go into more detail.”

Tucker's midweek news conference this week lasted about 45 minutes, and that's become the norm for the new coach. Seemingly any question can elicit a thorough, methodical response from Tucker — in contrast to some coaches who seem like they're just trying to get these obligations over with. Postgame availabilities can also include a good-sized monologue. After Saturday's loss to Ohio State, Tucker's opening statement — before taking questions — went on for a good 10 minutes.

Tucker framed his verbose approach as an attempt to help the media get to know him.

By extension, it could also be read as an attempt to help his new fan base learn more about its coach. In a season of empty seats and video conference calls, it hasn't necessarily been easy for Tucker to build a bond with Michigan State fans at large — but they should have a decent sense by now of how he operates.

Tucker isn't likely to end up on a highlight reel ranting theatrically — his demeanor is calm but serious. But like his predecessor, Mark Dantonio, he has a way of making his point abundantly clear.

“We've got to get better faster, because I'm not about this long-term deal,” Tucker said after a 52-12 loss to the Buckeyes last weekend. "We need to get something done right now.”

Behind the scenes, players have learned plenty about their new coach. Defensive end Drew Beesley said Tucker's attention to detail is noticeable.

“Focusing on the details, it seems like the littlest thing, but it's important, and taking care and taking all those details into account will potentially make the difference from winning the game or losing the game," Beesley said. "It's a game of inches and the details matter.”

Tight end Tyler Hunt said the coaching staff took the time to get to know a player — and the players themselves had to do research on each other as a way of building camaraderie.

“We had to do research on all of our other players,” Hunt said. "For example, (tight end) Parks Gissinger on the team, we didn't know until this summer was a really good dancer. Just doing all those personal things makes you really get to know your teammates well."

On the field, the Spartans have looked overmatched at times against the Big Ten's best teams, although they did pull off upsets against Northwestern and rival Michigan. In that sense, the season has gone about as expected for a rebuilding program.

But in addition to winning games, Tucker's job also requires him to build connections — not just with his players and recruits, but to some extent with reporters and fans as well. This year, his lengthy video conferences are an opportunity to do that.