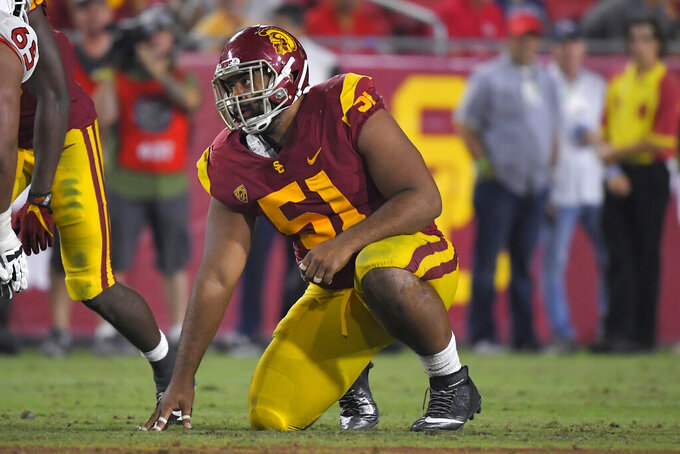 FILE - In this Aug. 31, 2019, file photo, Southern California defensive lineman Marlon Tuipulotu gets ready to run a play during the second half of an NCAA college football game against Fresno State, in Los Angeles. Southern California assistant coach Chad Kauha’aha’a always knew defensive tackle Marlon Tuipulotu could be a special player. Kauha’aha’a believed it when he tried to recruit Tuipulotu to Oregon State, and he is seeing it in his first season working with the redshirt sophomore for the No. 24 Trojans. “I knew he had the potential to be a great one,” Kauha’aha’a said Wednesday night, Sept. 11, 2019. (AP Photo/Mark J. Terrill, File)

Kauha'aha'a believed it when he tried to recruit Tuipulotu to Oregon State, and he is seeing it in his first season working with the redshirt sophomore for the No. 24 Trojans.

"I knew he had the potential to be a great one," Kauha'aha'a said Wednesday night. "I consider him a great player. He's playing behind the line of scrimmage, playing with great fundamentals and technique. He doesn't make mistakes mentally, and his numbers are showing it."

The 6-foot-3, 305-pound Tuipulotu has nine tackles, one tackle for loss and one forced fumble for USC (2-0), solid production considering he has been asked to do the dirty work at nose tackle. His primary role has been to control the middle of the opposing offensive line in the run game, usually while facing double teams from the center and a guard, to create opportunities for inside linebackers to make plays.

It is a largely thankless job, but one that suits Tuipulotu's unselfish disposition, Kauha'aha'a said.

What really stands out to teammates and Kauha'aha'a is the energy Tuipulotu brings, whether it comes in film study or on the field in practice and during games.

"He plays with great effort," Kauha'aha'a said. "I keep using the word 'great.' I don't use the word 'great' often, but his effort is through the roof right now. And he does it in practice every single day, and it's become contagious for the rest of the D-line. These guys are flying around."

Maintaining that level of exertion will be critical when USC plays at BYU (1-1) on Saturday. The Cougars have a veteran offensive line, and Kauha'aha'a can see their improvement after facing them last season when he coached at Boise State.

"Last year they were a group that was trying to get developed, and this year they're a seasoned group from what I see on film," Kauha'aha'a said.

BYU's experience has yet to result in much production on the ground, with the Cougars averaging 3.83 yards per carry against No. 11 Utah and at Tennessee. Instead, the Cougars have largely relied on sophomore quarterback Zach Wilson to generate offense with his arm and ability to move in the pocket.

Wilson's dual-threat ability will put added pressure on USC's defensive line to keep him contained, something it struggled with in the season opener, a 31-23 victory over Fresno State. Bulldogs quarterback Jorge Reyna rushed for 88 yards, with most of his production coming on scrambles when plays broke down.

Adding to the challenge for the Trojans is the uncertain status of defensive end Christian Rector, who has not practiced this week after injuring his ankle in the 45-20 win against Stanford. Rector, a redshirt senior, is second on the team with two tackles for loss.

But even if USC does not have Rector against BYU, Kauha'aha'a saw signs of growth from the defensive line against the Cardinal. The Trojans allowed 3.3 yards per carry and had 10 tackles for loss, with the relentless Tuipulotu getting his first of the season among his four total tackles. The pass rush collected all three of its sacks in the second half when Stanford was held scoreless.

And as long as Tuipulotu is leading by example, USC's defensive front is ready for whatever is in its way.

"Effort is everything, and having that as an example every week, we try our hardest same as that," defensive tackle Jay Tufele said.

NOTES: Sophomore WR Devon Williams entered his name in the transfer portal. Williams, a four-star recruit in 2018, caught one pass for 11 yards against Stanford after contributing mostly on special teams as a freshman.